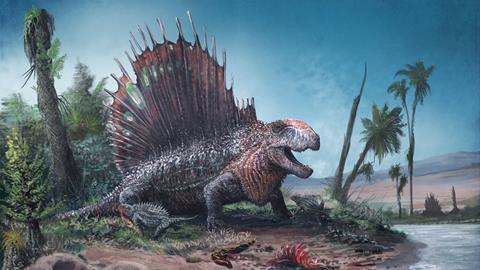 Research on thallium isotope ratios suggests that the true reason up to 90% of the Earth’s species died out around 250 million years ago may be fluctuations in the oceans’ oxygen levels rather than a simple drop in dissolved oxygen.

Sediment records have suggested that the end-Permian mass extinction – the largest mass extinction in Earth’s history – resulted from a cascade of detrimental environmental effects triggered by increased volcanism, leading ultimately to extreme global heating and oceanic anoxia. However, new research has found that, just prior to the extinction, ocean oxygen levels actually increased.

Geochemical evidence from various isotopes, including iron, has previously suggested that seawater oxygen levels dropped dramatically during the end-Permian mass extinction. But reducing iron(III) to iron(II) , for example, requires deep anoxia, so it can’t reflect more subtle changes in ocean oxygenation levels. For this, researchers considered manganese. In low-oxygen environments, it forms water-soluble manganese(II). When oxygen levels are higher, it oxidises to its +4 state and rapidly precipitates as manganese dioxide (MnO2).

In fact, this happens too readily. ‘If you want to interpret what global changes might be occurring, it’s very hard with an element that’s going to sink out before it mixes all the way around the globe,’ says Sean Newby of Florida State University in the US.

Newby and colleagues focused on the even more subtle changes reflected in thallium isotopes. MnO2 incorporates thallium from seawater – preferentially the heavier thallium-205 isotope. When seawater is oxygen-rich and more MnO2 is being deposited, the thallium remaining dissolved in seawater is enriched in the lighter thallium-203. 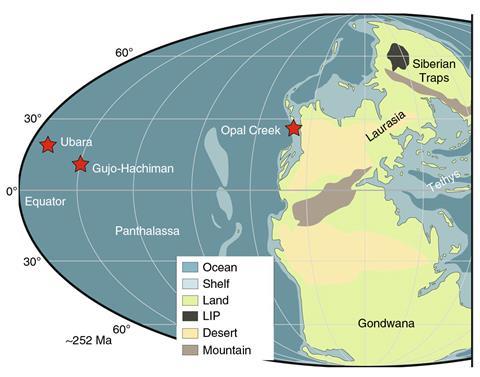 The three sites the team sampled sediments from as they were located during the later Permian when Earth’s landmasses were concentrated in a single supercontinent, Gondwana

The researchers measured the thallium isotope ratios in oceanic shale from three sites in Japan and Canada dated from around the end-Permian mass extinction. A gradual relative increase in thallium-205 – indicating a decline in oceanic oxygen – began more than a million years before the onset of the event. Then, for about 60,000 years before the start of the mass extinction, however, the proportion of thallium-203 increased sharply, suggesting the ocean became richer in oxygen. Finally, the onset of the mass extinction coincided with severe anoxia, which may have persisted for several million years.

The researchers are uncertain what caused this oscillation, but one possibility is transient cooling induced by aerosols from increased volcanism. The absence of any signal in iron or other isotopes implies that the amount of dissolved oxygen never changed dramatically before the major extinction began. However, even the more subtle changes indicated by the thallium isotope records could have had dramatic effects. ‘The manganese redox potential region is pretty similar to the nitrogen one,’ explains Newby. ‘Any time you see manganese changes you’re probably also going to see changes in the nitrogen cycle, which is a very major component of most marine life.’ Organisms that had evolved to survive in one regime, the researchers suggest, could have been unable to evolve back to survive in the other.

‘The application of the thallium isotopes really provides a new constraint on how well oxygenated or how deeply anoxic the ocean was prior to this event,’ says geoscientist Lee Kump of Penn State University, US. ‘For me, the fact that the thallium isotopes appear to be swinging back and forth suggests that the ocean was teetering on the threshold between oxia and anoxia and that makes a difference for people like me who are trying to model the ocean–atmosphere biota system through this event.’