Migratory insertion is a fundamental reaction mechanism that is often proposed to occur in catalytic cycles to form new chemical bonds selectively and efficiently. It normally occurs when two substrates bound as ligands to a metal centre couple together in a concerted manner to form a single molecule, but as this occurs in sequence with many other reaction steps it can be difficult to observe and study.

Now, researchers led by Jason Lynam and Ian Fairlamb, from the University of York in the UK, have unpicked the migratory insertion of an alkyne in the presence of a manganese complex. 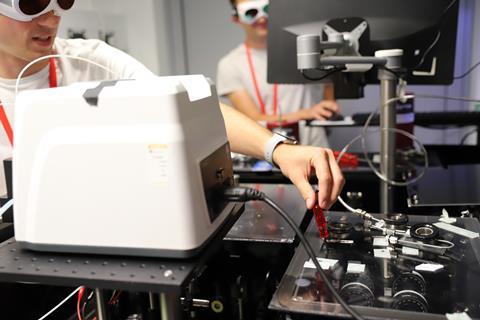 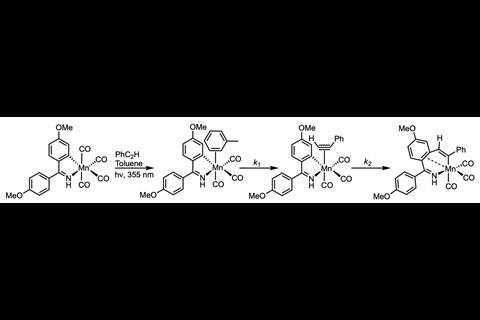 ‘One of the big problems in catalysis, is that if you have a good catalyst, by definition all of the intermediates on your cycle are going to be short lived,’ says Lynam. To probe these steps and intermediates, the team used time-resolved infra-red spectroscopy techniques at the Rutherford Appleton Laboratory, UK, to activate a manganese carbonyl pre-catalyst and detect the subsequent catalytic steps as they occured in real time. ‘The key is timescale,’ says Fairlamb. ‘With normal kinetic measurements, it’s on at best a second timescale with aggregated rate data. But because we’re on an ultrafast timescale we are able to break down that catalytic cycle, and get information on each of those steps in principle.’

The team monitored and observed the fast catalytic steps of the reaction, as well as the rate-determining ones, including the key migratory insertion step. Combing their experimental data with Natural bond order analysis allowed them to visualise the migatory insertion step further, and show that the regiochemistry of the process is controlled by a single transition state.

Andrew Orr-Ewing from the University of Bristol in the UK uses similar spectroscopic techniques to examine organic and photocatalytic transformations.2,3 ‘The setup at the Rutherford Lab allows you to access all of the different timescales [in a reaction] in a single set of measurements. We can’t isolate the reaction intermediates synthetically, but by using this we can see them in solution using this powerful method’ says Orr-Ewing.

‘It makes you realise [time-resolved infra-red spectroscopy] is applicable to a whole range of catalytic processes for studying discrete steps within a catalytic cycle,’ says Fairlamb. ‘We’re not at the stage where we’ve mapped out a whole catalytic cycle, but we’re very close to it.’