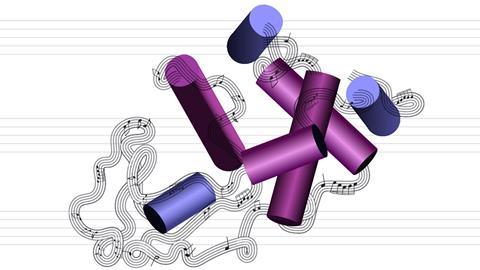 A team of scientists from the Massachusetts Institute of Technology, US, assigned each of the 20 common amino acids a note on the C minor scale. The heaviest – tryptophan – has the lowest pitch while the lightest amino acid – glycine – has the highest. A protein’s secondary structure is used to generate the rhythm. Among the proteins the team sonified are sperm whale myoglobin – the oxygen-binding molecule that allows these whales to dive as much as 2km deep – a silk protein and the antimicrobial enzyme lysozyme.

Neural networks trained on the bio-musical scores were able to create new compositions based on what they learnt. The researchers think this approach might help AI to recognise the hidden design principles that give each protein its function. The algorithm can then introduce changes and convert the songs back into amino acid sequences, which might eventually allow scientists to tailor-make proteins for specific applications. Algorithms might even be able to tackle other problems – such as nanomaterial design – using musical translation.

Although humans might find it difficult to interpret protein structures by listening to them, the researchers suggest that it could be a useful outreach tool. They built a free-to-use Android app that users can create their own protein scores with.