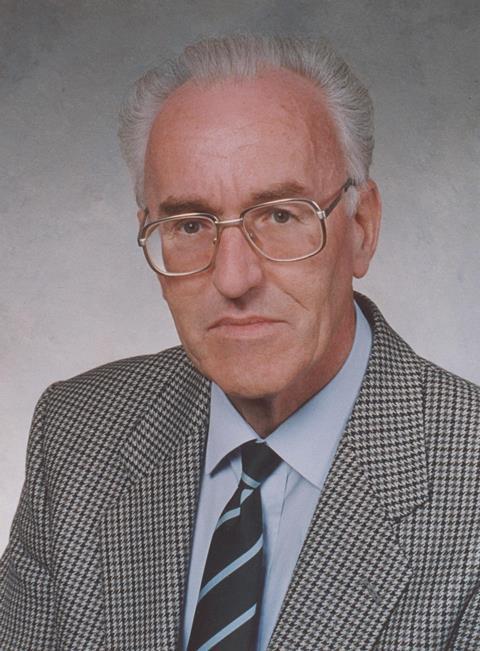 Eddie Abel, past president of the Royal Society of Chemistry, died on 19 April at 89.

The organometallic chemist, who served as RSC president between 1996 and 1998, played an influential role in UK higher education policy and research funding. He was made a Commander of the Order of the British Empire in 1997.

Tom Welton, the RSC’s president and a professor of chemistry at Imperial College, paid tribute to Abel saying that he touched many people’s lives. ‘Of course I learned a lot of chemistry from him, but he also taught me so much about how to treat others,’ he added. ‘He was always on hand to give help when any of us needed it. There are many people, including myself, who would not be where we are now without him. I will always be grateful.’

Abel grew up in South Wales and after graduating he served with the British Army during the Korean War. When the war ended, Abel knew he wanted to pursue chemistry and teaching, and found himself in Darlington Public Library reading chemistry journals. He was in touch with inorganic chemist Mike Lappert during this time and learned that there was an opening as a demonstrator at Northern Polytechnic Institute in London, now part of the London Metropolitan University, which he secured. Lappert quickly got Abel hooked on organometallic chemistry, and under his guidance he finished his PhD in two years.

Geoffrey Wilkinson, who shared the 1973 chemistry Nobel prize for pioneering work in organometallic chemistry, was also a major influence in Abel’s life. Abel had the organometallic chemistry expertise that Wilkinson was seeking, and in 1956 he became the first postdoctoral fellow to work in Wilkinson’s lab at Imperial College. While there Abel was involved in an incident in the 1950s that caused a significant fire that also blew out the door and some of the windows in Wilkinson’s adjacent office. There were ‘huge clouds of grey–green smoke’, according to William Griffith, who joined the group as a PhD student in 1957.

‘Abel was making trimethylsilylchromate for the first time; his reaction vessel exploded and some solvent bottles caught fire,’ Griffith recalls. After returning from hospital, Abel was told by the department’s head that ‘on no account was the synthesis to be attempted again in any of the chemistry laboratories’, he adds. Undeterred, Griffith says Abel came in very early on a Saturday morning and prepared the compound, which was needed for final analyses, on the fire escape outside the lab, ‘wearing three lab coats and a big towel around his head for protection’.

In 1972, Abel became an inorganic chemistry professor at the University of Exeter, and he headed its chemistry department from 1977 to 1988. He also took on roles in higher education policy at the national level.

First, he was appointed to the Exeter Grants Committee’s physical science subcommittee that oversaw teaching and research in chemistry, physics and earth science, and then took a seat on the full University Grants Committee. During the 1970s and 1980s, Abel also spent a good deal of time on the RSC local section circuit, delivering lectures at schools.

Helen Pain, interim chief executive of the RSC, said: ‘I owe so much to Ed, from my time working as part of his research group in Exeter and throughout my career at the RSC. He led by example – kind, generous and supportive – inspiring a passion for the subject and the profession of chemistry.’

Nicholas Long, an inorganic chemistry professor at Imperial whom Abel supervised during his PhD in the late 1980s, describes him as a ‘gentleman and a scholar’. He adds: ‘It is a sad day, that another of the modern giants of organometallic chemistry has passed on, but Ed leaves behind a great legacy that has made a difference to so many lives.’

Long recounts that on the first day of his PhD Abel took the day off work to be his chauffeur and ferry him around prospective rental flats. He then left him with a clutch of papers on fluxional organometallics for some ‘light reading’, he continues.

In addition, Long says Abel had a ‘wonderfully light touch’ when it came to supervision, allowing his mentees to find their own way, with a ‘gentle nudge in the right direction’. Long has fond memories of many delightful dinners hosted by Abel and his late wife Margaret, as well as infamous Christmas parties that Abel presided over in the lab, which involved mince pies warmed in the lab oven and mulled wine on hotplates.