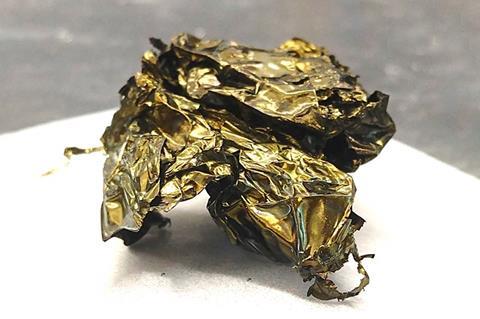 By unzipping fused ring molecules using mechanical force, researchers have made an elusive fluorinated polymer for the first time. The work is a proof-of-principle for mechanochemistry as a tool to access structures that are difficult to make with traditional synthetic methods.

In 1977, it was discovered that when polyacetylene – a conjugated polymer – was doped with substituents such as iodine or bromine, it displayed high conductivities relative to the dopant concentration. The discovery ushered in a new era of research in organic semiconductors and led to the development of organic electronics such as organic light-emitting diodes. Although polyacetylene was the first to spark creativity in this field, the compound has seen zero commercial applications. That’s due to its very low stability, reacting with atmospheric oxygen to oxidise the polyene backbone, rendering it virtually useless.

Although it has long been theorised that fluorinated polyacetylene could be more stable, efforts to make it using traditional methods have been unfruitful. ‘Generally, polyacetylene is made by polymerising acetylene, and mono or difluoroacetylene are extremely explosive and pyrophoric – bombs waiting to go off,’ says Noah Burns from Stanford University, US. ‘ Nobody has been able to study them because people haven’t been able to make them.’ But by stepping outside of solvent-based chemistry, a team around Burns, his Stanford colleague Yan Xia and Steven Lopez from Northeastern University, US, has now figured out how to make the fluorinated polyene.

The key to its synthesis lies in the use mechanochemistry, which means applying mechanical force to a bring about a reaction. As a starting material, the team created a fluorinated ladderdiene – a structure consisting of fused cyclobutane rings. The researchers started off with regular ladderdiene and reacted it with hexafluorobenzene in an exotic photochemical reaction.

Previously, the researchers had shown that applying force to a ladderdene structure isomerises it to create polyacetylene – a reversal of [2+2] cycloaddition. In the same sense, applying ultrasound force to fluorinated ladderdiene creates fluorinated polyacetylene as an iridescent golden solid.

‘The basis of this reaction is the creation of a partially fluorinated ladderdiene structure, which is incorporated into the polymer, and by pulling on this polymer using mechanical force in the form of sonication, they’re able to unzip this into polyene with fluorine substituents,’ says Tomislav Friščić, a mechanochemistry researcher at McGill University in Canada. Ultrasonication creates areas of compression and dilation – essentially ultrasonic waves, explains Friščić. That leads to ultrasonic cavitation effects, wherein an area of expansion rapidly collapses, which creates high temperature hot-spots. Cavitation exerts mechanical force on a sufficiently long molecular fragment like a polymer.

‘This is a really nice piece of work because it actually moves from hydrocarbon-based systems to fluorinated systems – and the authors demonstrate that they can build their polymer structure based on a precursor available in gram amounts,’ says Friščić. ‘There are claims in this paper saying that this shows you can use mechanochemistry to access targets which are not normally possible to access – to this I would say, “Yes, that claim is beautifully justified here.”’

Correction: The names of the corresponding authors were updated on 8 January.