By tweaking their organic synthesis software, Chematica, the team behind the program has shown for the first time that a machine is capable of planning multi-step syntheses for complex natural products. Three of the syntheses were experimentally validated in the lab, and a ‘Turing test’ for chemistry showed that the machine’s routes were largely indistinguishable from those designed by humans chemists.

When poring over a long, drawn-out total synthesis for a complex natural product, it’s easy to get lost. Many of the reaction steps involved often don’t seem as though they’re bringing the starting materials closer to the target. But that’s a talent of human chemists – being able to strategise many moves ahead and make creative choices, carrying out a sequence of seemingly arbitrary steps until things suddenly come together. When it comes to total synthesis, computer programs can be likened to beginners at chess – to date, they’ve been programmed to think only one move at a time. While this strategy allows machines to design routes to relatively simple products, they have difficulty designing multi-step syntheses to complex products because they lack the ability to think many moves ahead and think like a human. 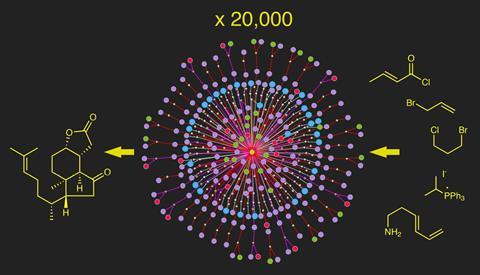 ‘Sometimes as a chemist you complexify a structure – but a computer doesn’t see any gain in doing this,’ says Bartosz Grzybowski, one of the developers of Chematica. ‘But once you go over the hump in complexity, you can get something very simple.’ What’s also tricky for the computer is that when generating a pathway to a complex product, the chemical space rapidly becomes astronomically large. Each reaction step creates 100 branches which the computer could follow, meaning that for a synthesis consisting of 20 steps, the space will have 10020 options. In an attempt to help the program navigate this space to find useful reactions, the team introduced a new pair of algorithms. ‘One algorithm is exploring the space for a diversity of solutions, while the other is trying to finish the synthesis as quickly as possible. They’re both talking to one another, so they’re updating themselves,’ says Grzybowski. Other changes – new reaction rules, quantum mechanical methods and molecular mechanical methods were also included.

While those changes allowed Chematica to find routes to a few natural products, it still couldn’t find others – even when it knew all of the individual reactions to plan the synthesis. Going a step further, the team introduced rules based on causal relationships – teaching the program how choices at one point in the synthesis can create the possibility of other choices down the line; for example, complicating a structure to simplify it later. With this improvement, Chematica was able to create original routes for many complex molecules, such as Lamellodysidine A, which the team experimentally validated along with two other natural products.

The team went on to carry out a chemistry Turing test to determine if the routes designed by Chematica could be distinguished by experts from those designed by a human. Combining 20 pathways designed by the program with 20 syntheses taken from the literature, 18 top-level chemists were asked which they thought was designed by a person and which by a machine. ‘They couldn’t tell,’ says Grzybowski. But Grzybowski emphasises that the intention isn’t to do away with humans. ‘We’re not trying to replace chemists – we’re trying to give chemists a calculator to do things faster,’ says Grzybowski. ‘The machine can show you different options – for example, you can say “I want to do something different – don’t use the Diels-Alder reaction”. So, it gives you more options on timescales that would be very hard for humans to achieve.’

‘I think it’s a landmark, it’s the first time that we’re seeing a computer being able to achieve natural product total synthesis,’ says Timothy Cernak, an assistant professor studying the interface of chemical synthesis and computer science at the University of Michigan. ‘And really the centrepiece is this Turing test … the computer is approaching the ability of a human to navigate relatively complex molecules. There’s some alkaloids in here, there’s some polycyclic terpenes – these are not the easiest things to make.’