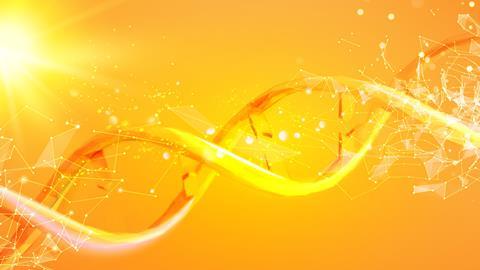 Many sunscreens wear off over the course of a day, but a DNA material developed by US scientists gets better at absorbing ultraviolet (UV) light the longer it is exposed to it.1 The transparent coating could protect skin – particularly damaged areas – from sunburn over long periods of time.

‘UV light is particularly bad for wounds because the skin is already weakened,’ explains Clara Piccirillo a materials chemist from the Portuguese Catholic University, who previously developed a fishbone-derived sunscreen but wasn’t involved in this study. ‘There is a lot of research to try and find multifunctional materials for dressings, for instance something antibacterial that at the same time protects from UV light.’

To do this, Guy German from Binghamton University and his colleagues looked to one of the most common polymers on the planet: DNA. The team had already established that self-assembled DNA films could absorb UV light. ‘But what was really interesting is that the more UV we dosed the films with, the better they got at attenuating the light,’ German says.

This unexpected behaviour is likely to be the result of hyperchromicity: when exposed to UV light, the DNA’s strands separate and unravel. New bonds between the DNA chains and changes in the material’s crystal structure then increase its ability to absorb and scatter light.

The coating is transparent to visible light, which would make it particularly suitable as a wound covering. ‘You wouldn’t need to lift up a wound covering as this might not be a good idea in hostile or contaminated environments,’ explains German. Moreover, the DNA film keeps the skin hydrated, which has been shown to promote faster healing.2 ‘Another advantage is that it’s made out of DNA, something that we already have in our bodies, so it’s likely that it’s not toxic,’ says Piccirillo. The material is currently undergoing biological testing, German adds.

As to whether the material could also work as an everyday sunscreen, German hopes so. A DNA-based cream could curb worries about the safety of common UV protectants and decrease the amount of coral-harming chemicals released into coastal waters by sunscreen wearers.

However, in its current film-like form the material can’t be made into a cream, which requires compounds to be soluble or finely dispersed. ‘It is the formation of the film that offers UV protection,’ says Piccirillo. ‘I can’t see this applied in an emulsion in its current form – though that doesn’t mean that in the future they’ll find a way to formulate it that way.’

‘We have lots of testing and work to do to push it forward to commercialisation status,’ acknowledges German, ‘but that’s another pathway that we are exploring.’