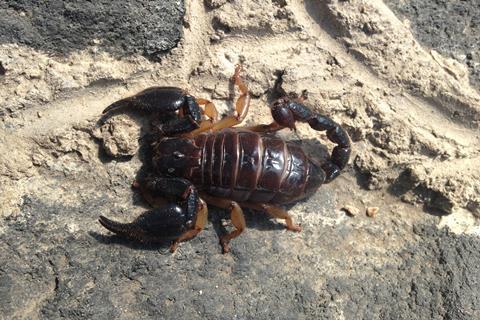 Different species of scorpions are similar anatomically, but the shapes of peptides within their venom reveal how closely related they are

Peptides found in scorpion venom have shed new light on the animal’s evolutionary history. The findings could offer a new way to evaluate many complex relationships found in nature.

There are more than 2400 species of scorpion, but researchers have struggled to work out how they are all related to each other. This is partly because most scorpion species have very similar anatomies, which makes it difficult to determine when evolutionary splits occurred. But new research led by scientists at the University of Wisconsin–Madison, US, has shown that the shape of particular venom peptides can help to distinguish different branches of the scorpion family tree.

The study used a combination of phylogenomics and molecular modelling to determine links between scorpion species and better understand how their venom toxins evolved. The researchers scrutinised a genomic dataset that included over 3100 genes from 55 species of scorpion to piece together a preliminary evolutionary tree. They then analysed venom gland RNA from different species to establish how the shape and function of a particular class of peptide evolved as the different species split off from one another.

Their datasets are the most comprehensive collections of biological information on scorpions to have ever been assembled. The project was co-led by Carlos Santibáñez López who travelled to remote locations around the world to search for scorpions and analyse their sting. He explains that while venom toxins from other creatures such as spiders and snakes are well studied, scorpion venoms are less well-explored, with only the most toxic scorpions attracting the majority of researchers’ attention.

The team discovered that across two of the main branches of the scorpion group, one class of biomolecule – the inhibitor cysteine knot (ICK) peptides – evolved into two different types of toxin with distinguishable shapes. Across the Buthida family – which encompasses almost half of scorpion species – the ICK peptides evolved into potassium channel toxins known as LKTx peptides, which are roughly spherical. In the Iurida family, the ICK peptides evolved into a class of calcium channel toxins known as calcins. These molecules have a much less rounded shape, more closely resembling a three dimensional puzzle piece, Santibáñez López says.

The scale of the genetic data analysed in the project is impressive, says Jessica Garb, an expert on evolutionary biology and genomics from the University of Massachusetts Lowell, US, who wasn’t involved in the study. ‘It is also original in its analyses using comparative morphometrics to examine the evolution of venom toxin shape,’ she adds.

It is unusual and unexpected that the LKTx and calcin toxins have remained relatively unchanged within the Buthida and Iurida families over hundreds of millions of years notes Garb, who points out that much more variance is seen in the venom toxins of other animals.

Importantly, the scorpion phylogenetic tree is now far more resolved than was previously the case. ‘The work will enable new research into other aspects of scorpion evolution and will probably spark debate about the functional interpretation of toxin morphometrics,’ says Garb.