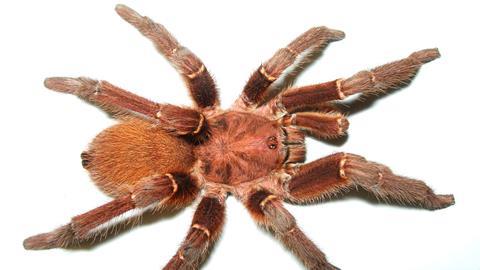 ‘I started to feel a horrible burning and throbbing sensation, which intensified [and got] a lot worse after 30 minutes.’ This is how a king baboon spider keeper describes being bitten by his pet. Scientists have now discovered what makes this large African tarantula’s bite so painful – and how reversing its action could lead to the perfect painkiller.

In the wild, the king baboon spider (Pelinobius muticus) is a shy species that spends most of its time in its burrow. ‘What we know mostly of how painful their bite is, is because these spiders are very popular among people that have tarantulas as pets,’ says Rocio Finol-Urdaneta from the University of Wollongong, Australia.

The spider’s impressive size – up to 20cm – and striking rusty brown colour make it popular among collectors. But similar to the somewhat related orange baboon spider – known among tarantula aficionados as ‘orange bitey thing’ – P. muticus is extremely defensive and bites without warning when disturbed. It is also one of the few spiders that hisses and it does this by rubbing its legs together.

A team around Finol-Urdaneta and her Wollongong colleagues David Adams and Paul Alewood has for the first time shown that the venom’s effect is likely due to one peptide attacking several pain receptors at once. ‘It’s these combined actions on all those targets what has such a strong effect eliciting pain,’ explains Finol-Urdaneta.

The team identified a single, compact 40 amino acid peptide in the spider’s venom. Finol-Urdaneta recalls testing it on dorsal root ganglion neurons – spinal cord cells that relay signals from nerve endings, for example those in the hand – to the brain. ‘When you add that peptide, the neurons just start firing like crazy.’

It turns out that the venom peptide activates certain sodium ion channels and, at the same time, blocks a type of potassium ion channel. These ion channel receptors are proteins located in cells’ membranes and are some of the many that can be involved in pain. By targeting several types of receptors, the venom makes ‘cells more excitable and eliminates the chances for them to recover, which is what the potassium channels would be doing’, explains Finol-Urdaneta.

‘The real challenge in my opinion will be to redesign the peptide to reverse its activity – blocking sodium channels and opening of potassium channels,’ says Steve Peigneur, who researches venom peptides at Belgium’s KU Leuven. ‘If this can be achieved, that would be a new generation of potential analgesics.’ Finol-Urdaneta calls a molecule that could perform this opposite function ‘the perfect analgesic’.

Despite several decades of research, venoms are still an untapped source of pharmacological treasures, Peigneur explains. ‘[Some venoms] have taught us, for example, which targets are important to treat in irritable bowel syndrome,’ says Finol-Urdaneta.

Usually, researchers search for molecules that only target a single receptor type. ‘But, for understanding pain, I think we have to reconsider the function as a whole,’ says venom expert Sylvie Diochot from Côte d’Azur University in France. ‘That’s why this [study] is interesting, it shows that molecules that act on several ion channels involved in the pain perception chain can modify pain function. This might help us explain how [the receptors] interact.’

Finol-Urdaneta’s team now wants to identify which peptide components play what role in its multi-target mechanism ‘to actually consider synthesising something that will do the opposite’.