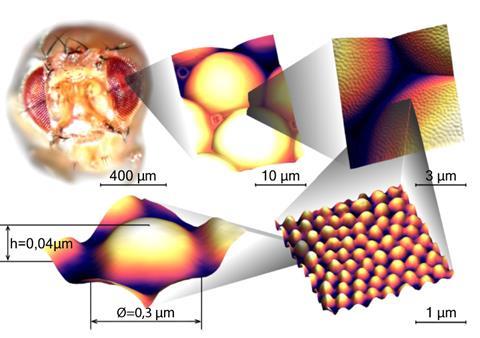 Successive enlargements of a fly’s eye. The eye is made up of many facets, which are themselves covered by a thin layer of protuberances a few tens of nanometres high

A nanoscale replica of the coating that protects the eyes of fruit flies that retains its anti-reflective and anti-adhesive properties has been developed by a team of reserchers at the University of Geneva. This new nano-coating, which is comprised of the protein retinin and corneal wax, could find applications in contact lenses, medical implants and textiles.

The researchers were able to produce retinin cheaply by using genetically modified bacteria, and then purifying it and mixing it with various commercial waxes and coating glass and plastic surfaces. They also showed that their nano-coating can be deposited on other surfaces such as wood, paper, metal and plastic.

‘Our work identifies how multifunctional nano-coatings are created in nature and translates this knowledge into technological applications,’ the scientists explained. They noted that they achieved this through a combination of mathematical simulation, phylogeny, genetics, biochemistry and forward engineering.

The bio-inspired nano-coatings proved to be stable, even after 20 hours of washing. However, the material was easily damaged by detergent or scratching, and the researchers suggest that technological enhancements could make it stronger. Its anti-reflective properties have already caught the attention of contact lens manufacturers, and its anti-adhesive properties could be of interest to medical implant manufacturers.