Giant crystal lattice is mesoporous but not a MOF

Scientists in Japan have made a mesoporous ionic solid from a single complex cation. The solid has a pore structure larger than topologically-related metal–organic frameworks (MOFs) and, at more than 2 million Å3, it has the largest cell volume among non-MOFs.

Typically, mesoporous crystalline 3D structures such as MOFs are held together by coordination bonds between metal nodes and organic linkers, or covalent or hydrogen bonds. Takumi Konno and colleagues at Osaka University have now created the first example of a mesoporous ionic solid held together only by non-covalent CH…π interactions. 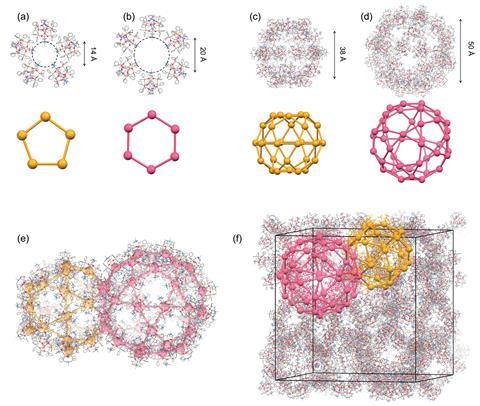 Topological analysis revealed that the framework adopts a 6-connected mtn-e net structure, which is the same as that of the MOF MIL-101

The researchers first prepared a chiral trigold(i) metalloligand containing D-penicillamine, to which they added silver(i) and copper(ii) salts. After growing crystals at 0°C and analysing the structure by single-crystal x-ray crystallography they found they had formed a non-porous salt containing a cationic AuI6AgI3CuII3 dodecanuclear complex.

However, the scientists noticed that crystals grown at 25°C had a different shape and analysed them to find something quite surprising. While they found a structure containing the same dodecanuclear cations, the new crystals revealed a mesoporous zeotype framework that is topologically related to the well-known MOF MIL-101. This arrangement formed through the cations self-assembling into two types of face-sharing mesoporous cage and is only held together by CH…π interactions. Each unit cell contains 272 of the AuI6AgI3CuII3 complex cations.

Due to the cationic nature of the framework, the researchers could selectively exchange the counter-anions in the framework while retaining its single crystallinity. They also demonstrated selective anionic dye uptake from a mixture of cationic and anionic dyes.