Zinc a double-edged sword when it comes to nickel catalysis

Zinc and nickel are known associates in catalysis. However, the role of zinc in nickel-catalysed reactions – a cheaper, greener alternative to palladium – remains little explored. Now, a new study has discovered that zinc favours certain unproductive pathways, such as the formation of metal clusters and oxidation events. Fully understanding these mechanistic secrets could lead to more efficient transformations.1 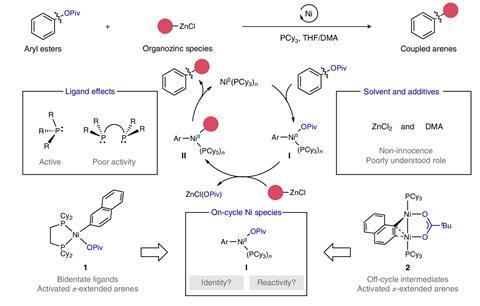 Nickel-catalysed cross-coupling of aryl esters with organozinc reagents and the existing ambiguity exerted by the reaction parameters.

Nickel complexes are an increasingly popular choice to catalyse the formation of new carbon–carbon and carbon–heteroatom bonds.2 Zinc is often added in the same flask, whether it’s forming organometallic compounds used in cross-coupling reactions or as an additive. But there had been little investigation of what it was doing – until now. ‘It turns out zinc is not a simple spectator,’ says Rubén Martín from the Institute of Chemical Research of Catalonia, who led the study. ‘We demonstrate zinc reagents are intertwined with [nickel] catalytic species, providing comprehensive and well-defined mechanistic evidence.’

‘Despite the significant progress in the development of synthetically useful transformations based on nickel, this metal remains not fully understood mechanistically,’ explains Cristina Nevado, an expert in organometallic chemistry at the University of Zurich, Switzerland. Unlike palladium, nickel participates in intricate redox processes, which complicate studying the reaction intermediates and mechanisms.

‘The roles of zinc have been overlooked because previously, it was assumed to only be contributing to one aspect of the reaction,’ says Neil Garg, an expert in synthetic strategies at UCLA, in the US. ‘Its role was viewed as positive and our rationale simplistic,’ he adds. These experiments reveal zinc is a double-edged sword. ‘The paper shows zinc plays multiple roles in nickel catalysis,’ says Nevado. Zinc favours transmetallation – atom exchange that leads to the formation of new C–C bonds – ‘but it also regulates decomposition pathways that hinder the development of the productive reaction outcomes’.

‘This manuscript allows for better … control over undesired reactivity and decomposition,’ explains Garg. One of these unwanted reactions leads to the formation of an unusual nickel–zinc cluster with seven metallic centres, which was characterised by x-ray crystallography. ‘We should focus on limiting these unproductive pathways to improve reaction efficiency,’ explains Martín. These strategies could include introducing sacrificial ligands that stabilise zinc before it forms the cluster or catalyses other futile side-reactions.

The interaction between zinc and the solvent also seems important. In particular, experiments show that amide solvents prevent decomposition and deactivation reaction pathways. ‘We demonstrate we can use solvent systems that were previously [considered] incompatible, providing another dimension to optimisation,’ says Martín. Moreover, ‘[these] solutions overcome these challenges without using toxic dimethylacetamide’, says Garg.

Martín believes that the need for high amounts of nickel for reactions is hampering the industrial uptake of this technology. These results suggest that some of this extra nickel is only feeding unproductive reactions with zinc additives, thus not leading to the desired cross-coupling products. ‘A better understanding of the catalytic cycles and deactivation pathways will also allow us to reduce catalyst loadings,’ he explains.