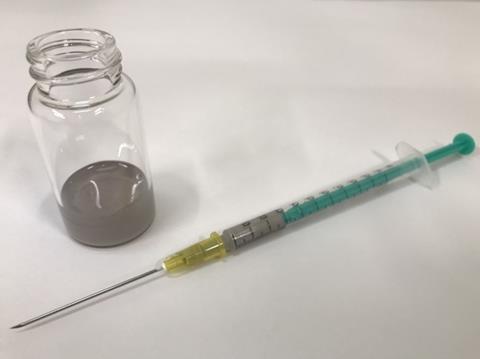 Dispersions of sodium particles less than 10µm in diameter in paraffin oil can be used to form zinc and boron compounds for carbon-carbon bond formation.

Cross-coupling reactions relying on comparatively rare, in-demand lithium are crucial to organic chemistry – but now Japanese chemists have shown abundant sodium can also work well. Sobi Asako, Hirotaka Nakajima, and Kazuhiko Takai at Okayama University safely produce organosodium molecules, and from them precursors for carbon–carbon bond-forming Negishi and Suzuki–Miyaura reactions. ‘We hope that this study will inspire researchers both in academia and industry who are trying to solve sustainability issues in organic synthesis,’ Asako tells Chemistry World.

The team started the study after an unexpected email from Japan’s Kobelco Eco-Solutions, which makes dispersions of sodium particles below 10µm in diameter for destroying persistent organic pollutants. The company wondered whether the Okayama researchers could use these sodium-in-paraffin oil dispersions in organic synthesis.

While organolithium compounds are commonplace in organic synthesis they can sometimes be hazardous, especially tert-butyl lithium, which caused UCLA student Sheri Sangji’s death from major burns. Their sodium counterparts are even worse. ‘Arylsodiums or alkylsodiums are more reactive than the corresponding organolithium compounds,’ says Takai. ‘It would be more nerve-fraying to syringe or store the organosodiums safely.’

However, chemists have been transforming aryl chlorides into arylsodiums using sodium dispersions since the 1930s, Takai says, which is a much safer proposition. The 26 weight percent sodium dispersion the Okayama researchers use is stable and easy to handle in air, and less reactive with water. ‘But still we have to carefully handle the sodium dispersion, because it’s sodium after all,’ Takai adds.

The Okayama chemists therefore prepared arylsodiums under inert atmospheres, quickly using them for further transformations. ‘We have convincingly revealed here that various arylsodiums, including the sterically-demanding ones, can be prepared easily from inexpensive aryl chlorides and used for a series of useful cross-coupling reactions,’ Takai says.

The reactions the scientists demonstrate include transmetallations to zinc and boron compounds analogous to aryllithium transformations. They then used these compounds in Negishi and Suzuki–Miyaura cross-couplings. However Asako admits the current accessible compound scope is more limited than other metals, which the team is working to overcome.

Rebecca Melen from Cardiff University, UK, likes the ‘easy alternative to the more typical organolithium and organomagnesium reagents so often used in organic synthesis’. She also hopes it might preserve lithium supplies for use in batteries, although changing the organolithium status quo will be a big challenge. ‘I certainly will attempt to use organosodium reagents in the synthesis of triarylboranes,’ Melen says.