Ringing the changes with some unconventional chemistry 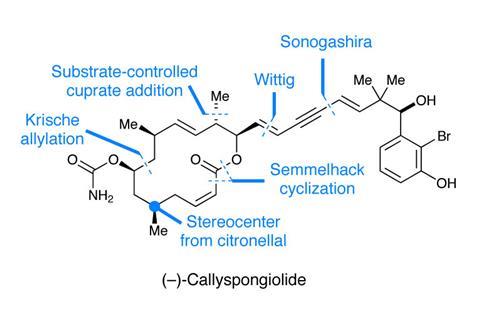 I’m not a big fan of the macrolide total synthesis genre. While there’s undeniably much skill behind it, I sometimes find it hard to appreciate the art, having never made a macrolide or studied the field in depth. To my untrained eye, these syntheses generally involve a series of well-established reactions – usually allylations and aldols – building up to an inevitable ester-forming macrolactonisation that often seems anticlimactic. With the shoulders of giants like David Evans and Ian Paterson to stand on, there’s perhaps little incentive to innovate in a field where reliable reactions and a blueprint for success already exist. So when I saw Patrick Harran use the word ‘unconventional’ to describe his route to (−)-callyspongiolide (figure 1), I was intrigued.1 If anyone can throw out the tropes and find an interesting way to make a big ring it’s Harran, whose Witkop-style approach to diazonamide A’s second macrocycle is one of the least obvious disconnections I can think of for a biaryl bond.2

The first surprise here is the absence of a seco-acid intermediate: the alcohol-at-one-end-acid-at-the-other substrate whose Ouroboros-like wrapping-up is normally the denouement of a macrolide synthesis. Harran also dispenses with the usual aldol chemistry, and while the route does have an allylation reaction, it is certainly not conventional. The creativity isn’t just for show, either – of the three published routes to this molecule, Harran’s is the shortest of the bunch.

Dipping into the chiral pool, two key building blocks are assembled from cellulose (the lactone) and citronellal (the alcohol). These are then efficiently coupled using Krische’s chiral iridium catalyst to effect a most unusual allylation. This reaction is extraordinary for several reasons: the ‘electrophile’ here is the alcohol, which gets oxidised in situ through the magic of hydrogen transfer. The allyl chloride is highly functionalised, and no stoichiometric organometallic reagent is used. The iridium catalytically activates both the halide (though oxidative insertion) and the alcohol (by oxidation) then unites the two with near-perfect diastereoselectivity giving hydrogen chloride as the only byproduct (figure 2)! While yield is a modest 62%, getting it from a one-to-one mixture of the two fragments (crucial, when both require multistep syntheses) is an impressive achievement.

After a few simple manipulations the group sets its sights on the key macrocycle forming step, which is hard to envision from the dioxaperhydroazulene intermediate now in hand (in fact, the seven-membered ring was only formed to allow hydrogenation of the C-9 olefin to proceed with the required stereoselectivity). First, perhemiketal formation is carried out with hydrogen peroxide under acid catalysis. The intermediate peroxide is then decomposed with iron sulfate and copper acetate, resulting in a homoallylic acetate that is clipped off with base to give the homoallylic alcohol. A Semmelhack-type palladium-mediated carbonylative cyclisation cascade then forms the macrolactone, but ties the remaining secondary alcohol into an unwanted pyran ring. Fortunately, lithium diisopropylamide-induced fragmentation breaks open the pyran, handily installing the required unsaturation in the ring, albeit with the incorrect E-geometry. However, a third act twist—photoequilibration—later remedies this problem (figure 3).

I’m really impressed how the team’s unique approach to macrolactone formation here cleverly incorporates the secondary alcohol into the cyclisation step and thereby dodges the protecting group chemistry that otherwise might have been required if it had just stood on the sidelines. From here the carbamate and enyne groups are appended in short order and the story is complete in just 18 linear steps.

Congratulations to the group on a highly creative approach to macrocycle synthesis.