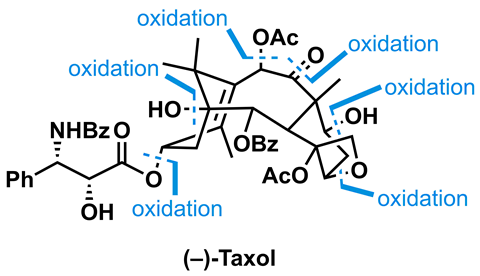 For all the talk of biological activity in the introductions of total synthesis papers, it’s pretty rare that the Venn diagram circles of ‘molecules useful to society’ and ‘molecules synthetic chemists want to make’ coincide. That’s not because natural products are bad drugs; indeed, between 1981 and 2014, over a quarter of all FDA-approved drugs were natural products or their derivatives.1 However, for a natural product to be a viable medicine it usually needs to be easily available from natural sources, which rather takes the fun out of making it. But there have been exceptions.

As a blockbuster drug, Taxol (paclitaxel) is hardly scarce now, but it was quite hard to come by when it entered the clinic in the early 1990s. Back then, it was at the very limit of what chemists thought they could make in the lab. Combined with its limited natural supply, this made it a very popular target. At the height of Taxolmania, at least 30 groups were competing for the glory of being the first to prepare it, culminating in a photo finish between Robert Holton and KC Nicolaou’s groups in 1993–94. Now, 10 syntheses of Taxol have been reported and these days the molecule is more often seen on the pages of textbooks than journals.

Perhaps the most famous group still known to be working on the Taxol problem is that of Phil Baran at the Scripps Research Institute in California, US. Baran telegraphed his strategy towards Taxol back in 2011 when he published a route towards the related but simpler natural product taxadiene.2 Taxadiene is essentially Taxol, but completely devoid of oxygen atoms. It’s the biosynthetic precursor to Taxol and nature uses enzymes – 18 of them – to bring it up to the Taxol oxidation level. Almost a decade later, the Baran group has succeeded in converting a simple taxane into Taxol by copying nature’s strategy of sequential oxidation of a simple precursor.3

One downside of this biomimetic approach is that it requires a completely linear synthesis. Another is that selective chemical C–H oxidation is really, really hard. While nature can put five oxygen atoms exactly where she wants them in just five steps, a chemist might need 10 steps – as some level of protecting group gymnastics and oxidation state jiggery-pokery tends to be required. Baran and his group are famous for ingeniously avoiding such time-wasting operations, but in this case even they can’t find a way through the minefield of reactive functional groups in the advanced intermediates without a few non-ideal steps.

Below is an example that’s emblematic of what it takes to wrangle the desired oxidations in such a complex system. Baran and colleagues need to oxidise at C1 as quickly as possible, ideally by directly replacing the C–H bond. Initially they find they can get some product using the powerful and unstable oxidant dimethyldioxirane (DMDO); however this reagent prefers to oxidise the neighbouring secondary alcohol. Unfortunately this side-reaction is a dead end, as C1 can’t be oxidised with a ketone next door.

Deuterating taxane at C2 makes it easier to achieve the desired oxidation at the neighbouring carbon atom. From there, a sequence of further oxidations lead to the formation of Taxol

Of course, this is the kind of selectivity problem that protecting groups are made to solve. Not satisified with this solution, the team instead prepares a new version of its starting material that is deuterated at C2. Thanks to the kinetic isotope effect, this slows the undesired oxidation of C2 relative to C1. The deuterium atom is then removed by Ley–Griffith oxidation with tetrapropylammonium perruthenate, followed by a classical sodium–alcohol reduction and carbonate protection. Thus, one more of the target’s oxygen atoms is painstakingly installed.

The paper is full of similarly creative solutions to synthetic problems and is a fascinating read. Obviously, this synthesis isn’t going to replace the current supply of Taxol (which more-or-less grows on trees), but it’s a unique approach that will no doubt be of interest to medicinal chemists due to the painless access to complex taxanes it enables. I remember the group proposing this taxane-to-Taxol approach when I was working on my PhD almost a decade ago and thinking how far-fetched it seemed at the time. Congratulations to the team on finally making it a reality!