There is no shortage of good ways to make 6-membered rings. Perhaps the most general and powerful is the venerable Diels–Alder [4+2] cycloaddition, an amazingly useful reaction that’s simple enough to teach to undergraduates, yet still a common sight in the primary literature. Unfortunately, tackling five-membered rings using cycloaddition chemistry is far less straightforward. While [3+2] and [4+1] cycloadditions are clearly mathematically feasible, in reality these reactions are tricky for all but a few special cases, and are not a common approach to all-carbon rings. That’s a shame, because five-membered carbocycles are a common feature in natural products and other interesting molecules.

One classic method that enjoyed widespread use in the 1980s was the vinylcyclopropane–cyclopentene rearrangment. Unfortunately, this reaction tends to require glassware-imperiling temperatures of 200‒600°C, as well as a great deal of practical skill, to perform in the laboratory. However, more appealing modern variants, such as intramolecular metal- or thiyl radical-catalysed [3+2] cycloadditions of vinyl cyclopropanes with olefins to give vinyl cyclopentanes, have emerged in recent years.

The total synthesis of pavidolide B by a group led by Jian-Xian Gong and Zhen Yang at Peking University in China showcases a very modern take on the vinylcyclopropane annulation as its key step.1 The route begins with two simple building blocks: a cyclopropanecarboxylic acid – made in 3 steps from hexadienal, and a hydroxylated derivative of the terpenoid (S)-carvone. The group couples these fragments using a Mitsunobu nucleophilic substitution – quickly teeing up the key vinylcyclopropane annulation cascade (Figure 2). 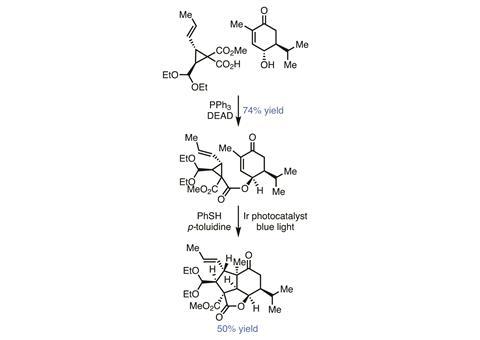 Such reactions are possible using transition metal or radical catalysts – anything that can open the vinylcyclopropane to kick things off. The group’s initial hit came under classic conditions: thiophenol coupled with the radical initiator azobisisobutyronitrile (AIBN). However, the fragile starting materials decompose at the temperature required for AIBN initiation. Searching for a milder way to generate the required thiyl radicals, the group hit upon photoredox catalysis. Using just 0.5mol% of the popular iridium photocatalyst Ir[dF(CF3)ppy]2(dtbpy)PF6, along with some blue LEDs, almost doubles the yield to 50% – quite respectable for a step that creates two rings and sets three new stereocentres.

Interestingly, the reaction also seems to require p-toluidine as an additive, which presumably acts as a redox mediator to make up for the kinetically slow direct oxidation of the thiol by the photocatalyst.

After hydrolysis and decarboxylation to remove an ester that was no longer required, all that remained was to build the final cycloheptanone ring. A nickel-catalysed isoprene addition to an aldehyde, with immediate reoxidation the resulting alcohol with Dess-Martin periodinane, sets up a ring-closing metathesis to complete the final 7-membered ring. Treatment with ruthenium chloride both isomerises the new olefin into conjugation with the ketone of this new ring, and inverts the bridgehead C-11 stereocentre, completing the natural product (Figure 3).

Figure 3 – The final ring is closed by metathesis, after which ruthenium isomerises the double bond and flips a stereocentre to complete the synthesis

Ultimately, the group’s daring choice of an unusual [3+2] annulation strategy is rewarded by reaching the target in a total of just 12 steps, and in 16% overall yield.