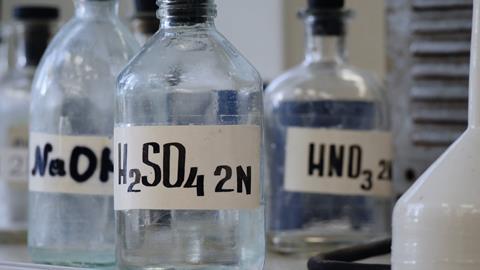 This week, Brian Clegg reluctantly breaks from tradition, for a vile compound:

Frankly, there are few things that can make a writer more vitriolic than a change of conventions. When I was young, sulfur (and hence sulfuric acid) was always spelt with a PH in the middle rather than an F (interestingly, my spell checker kept trying to switch it back to the PH spelling as I typed this), but the international standard has become F, so that's what I must use.

The main point of that opening was to slip in the word 'vitriolic'. It's a word that we use without really thinking about its origins, but there was a time when sulfuric acid was known as oil of vitriol. Technically, a vitriol itself was a metal sulfate salt, but 'vitriol' was often used as a shorthand for the acid and eventually has come to be applied to a cruel - or acidic - verbal attack. 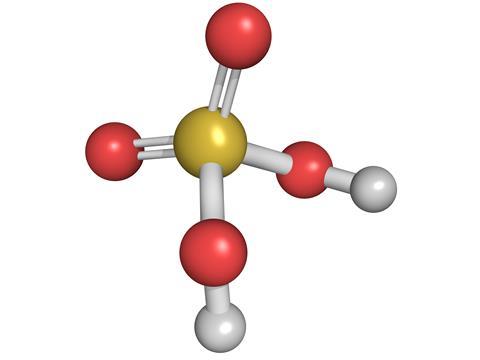 Mineral vitriols were known in ancient times, while oil of vitriol came into the alchemists' armoury around the thirteenth century. This was the classic example of a substance that was known and used long before it was entirely clear what it was. However by the seventeenth century, sulfuric acid was being produced on a near industrial scale by burning a mixture of sulfur and saltpetre, or potassium nitrate, with steam to provide the hydrogen and extra oxygen to produce the acid.

The result is the familiar formula H2SO4. One of the so-called bench acids, alongside hydrochloric and nitric, sulfuric acid is a very strong mineral acid - strong in the normal English sense because of its intensely corrosive nature, and strong in the chemical sense that it ionises completely in water when it loses its first proton to form a hydronium ion. (Hydronium is the positive H3O ion, which forms in water rather than leaving a bare proton floating around.)

Sulfuric acid is now made from sulfur dioxide in a catalytic process first devised in the 1830s but the outcome is the same - a strong acid that is highly corrosive and that produces a considerable amount of heat when mixed with water. This is why acid must always be added to water rather than the other way around, to ensure that you don't get a small amount of water in a large amount of sulfuric acid, resulting in flash boiling and spattering with the corrosive fluid.

In this heat-producing reaction, the acid and water form sulfate and hydronium ions. Sulfuric acid is excellent at getting hold of water to react in this way. This is why concentrated sulfuric acid will turn paper black - it is extracting hydrogen and oxygen from the starch in the paper, leaving pure carbon. Similar effects can be produced with other organic compounds - most dramatically with sugar, where an impressive tower of carbon is exuded. 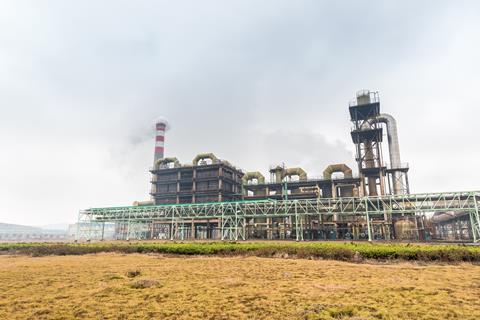 Sulfuric acid has a major industrial role in manufacturing fertilisers and detergents, where it is used to extract phosphate from rocks. It also finds its way into a plethora of industrial processes from removing corrosion from metals to making dyes. Most of us even own some sulfuric acid, though it is locked away where we rarely see it.

Car batteries have sulfuric acid at their heart (in fact sulfuric is sometimes called battery acid). In the electrolytic reaction that powers the battery, lead and lead oxide electrodes are transformed to lead sulfate, resulting in an electrical charge flowing from plate to plate. 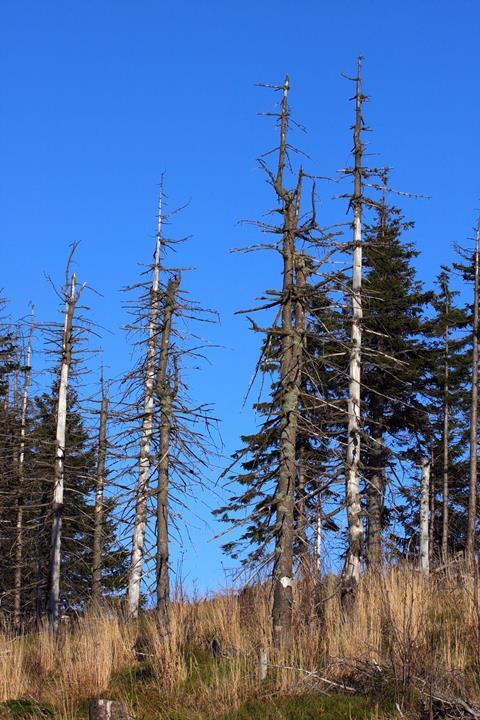 Here on Earth, sulfuric acid tends not to hang around in the natural world. It is just too enthusiastic to combine with water, for example when falling as acid rain. This is rain in the form of dilute acid as a result of pollution - whether from chimneys or from the decomposition of natural materials. Gases like sulfur dioxide and oxides of nitrogen combine with water vapour in the air to form dilute acids. Even 'clean' rain is acidic, as it reacts with carbon dioxide in the atmosphere to produce carbonic acid, but acid rain is significantly more corrosive, with a pH as low as 2.5, as compared with typical 'clean' rain which is around pH 6. It can seriously damage plant life and buildings, converting whole forests to stick-like remnants and dissolving away carbonate rocks like limestone and marble.

But the rareness of sulfuric acid in nature isn't the case once we leave the Earth. Venus, the hottest planet in the solar system, has an atmosphere  composed primarily of carbon dioxide, providing a runaway greenhouse effect. But it is also swathed in thick clouds of sulfuric acid that give the planet its reflective brightness. Not only is this a world where lead would run liquid on the surface, it rains sulfuric acid.

Sulfuric acid is not a pleasant substance. It causes severe burns and intense damage to skin and eyes. Yet it's hard to be entirely vitriolic about a substance that keeps cars on the move and gives us essential fertilisers. At least we know one thing. Sulfuric acid may sometimes be vile - but it will never be base. 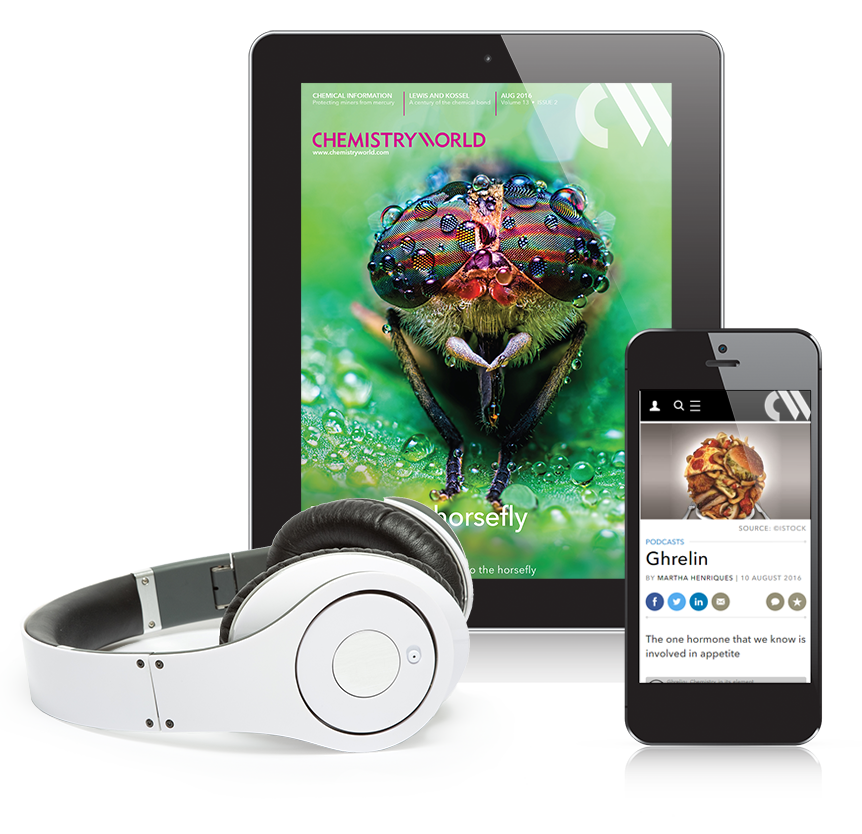 Hmm, and right now I'm quite glad we live on Earth, rather than Venus, that's for sure. That was Brian Clegg, with the vitriolic compound, sulfuric acid. Now, next week: inhale, and exhale - the compound that clears your airways.

I remember our GP showing me the blue-grey puffer and explaining how I should exhale as far as I could, and then while inhaling slowly, squeeze the small canister to release a single puff of aerosol. If the taste was faintly medicinal, the effect was astonishing: within seconds, the wheeze would be gone. My laughter would change from a shallow giggle to a hearty belly laugh. The drug proved an absolute blockbuster

And join UCL's Andrea Sella find out just how the compound salbutamol effect in next week's Chemistry in its element. Until then, I'm Meera Senthilingam, and thank you for listening.