Looking beyond the next wave

Covid-19 is an immediate crisis. The soaring numbers of cases and deaths have galvanised a global response in terms of funding, cooperation and collaboration between industry, academia and governments to discover and develop treatments and vaccines. 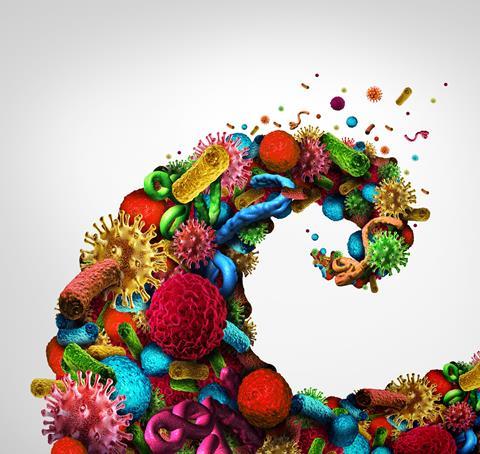 While this response hasn’t always been ideally coordinated, and has taken a few false steps in the rush for progress, it shows what can be achieved with the right sense of urgency and incentives. Although we don’t have a cure or a vaccine yet, we have plenty of good shots lined up.

But lurking beyond the coronavirus horizon are even greater threats to global health that struggle to attract the same level of action: antimicrobial resistance (AMR) and the impending climate disaster to name but two.

These problems are both less imminent and more difficult, and they move on longer timescales than political cycles. These factors together mean progress has been much slower than ideal, despite numerous and consistent warnings from scientists and campaigners. The lesson of Covid-19 is the scale and extent of the coordinated effort needed to tackle these issues – and that it means much more than just investment.

There is no shortage of initiatives targeting AMR from governments, philanthropic agencies and pharmaceutical companies themselves. The latest in this line is the AMR Action Fund, which brings together over 20 companies under the International Federation of Pharmaceutical Manufacturers and Associations. It promises $1 billion (£794 million) to support biotech companies, aiming to deliver 2-4 new antibiotics by 2030.

It is perhaps telling that several of the companies contributing to the AMR Action Fund have shut down their own antimicrobial R&D in the last five years – for example Novartis and Johnson & Johnson – despite having also been members of the 2016 AMR Industry Alliance. While antibiotic R&D is tough, in most cases firms have cited the lack of a viable business model as critical in their decisions. New antibiotics will naturally be held in reserve and used minimally, to delay any potential resistance from emerging. This means potential sales are limited, while development costs are at least as high as in other areas, perhaps higher. A recent example is Zemdri (plazomicin), which bankrupted its developer Achaogen for lack of sales, despite US approval. Even generics giant Cipla, which acquired the rights, abandoned plans for EU approval given the limited potential returns. Governments are now beginning to develop models that could get around this impasse, but it’s unclear how well they will work long term.

$1 billion is a lot of money, but we have already spent billions with little to show for it. Whether it will make any difference depends on implementing the lessons we learn from this pandemic.