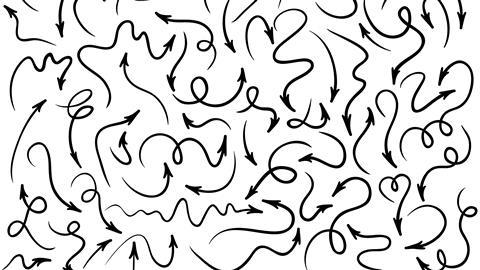 We need our simple symbols, but machines might not

Chemistry can be an inexact science. Abstracting its fundamental quantum goings-on into something more digestible to our minds involves approximations, simplifications, heuristics and ‘good enough’ descriptions that convey the essence, if not always the reality. Even its most basic concepts have fuzzy edges: bond, molecule, reaction, element – hold them too tightly and they slip out of our grasp.

That imprecision is a feature of chemistry as a scientific discipline, not a bug. It has allowed chemists to make progress without fretting too much about the overwhelming volume of underlying, but often unnecessary, detail. Chemists operate at these levels of sophistication simultaneously: acknowledging on the one hand that a model is flawed and not a true representation, while happily grabbing it with the other if it gets the job done. And it has been necessary because, up to now, chemistry has been done by human chemists.

That’s especially evident in our visual representations of chemistry: the molecules and reaction schemes we draw are reductionist marvels that represent both more and less than their lines and letters describe. We understand that the molecules we draw are vastly simplified abstractions of the quantum reality, but they also serve an important cognitive function. As Michelle Francl wrote in a recent essay in Nature Chemistry, structures structure our thinking; the way we draw them helps explain our observations to ourselves and to navigate our knowledge. And the way our representations have evolved over time reflects the way our knowledge has changed.

This year is the centenary of one of chemistry’s most cherished items of visual shorthand: the curly arrow. First proposed by Robert Robinson and William Kermack as a way to explain why a particular organic reaction always produces particular products, curly arrows point the way to which bonds are formed and which are broken. In his recent column, Philip Ball celebrates the curly arrow and the many other ways arrows have been adapted to symbolise chemical phenomena: bond making, resonance, reactions, equilibria and more besides. They are all part of chemistry’s noble tradition of reducing complexity to its key components – and while that means they might not be true reflections of reality, what they lack in rigour, they make up for in utility. Chemists are pragmatic: less concerned with whether something is accurate than whether it is useful.

Which poses a question: are chemists as ruthless with the pragmatist’s razor when a device is no longer needed? As computers and automation become increasingly important, modern chemists have the task of explaining our concepts and knowledge to machines – translating our drawings and schemes, through a variety of increasingly sophisticated models, into descriptions of a molecule and its properties that a computer can understand. Which is a vastly more efficient method than having the computer work it all out from first principles. At least for now.

If we imagine a time when exact calculations of chemical states are routinely possible, and when tasks such as synthesis planning and even synthesis itself are inevitably incorporated into black boxes, things might be different. To a future artificial intelligence or a million-qubit quantum computer, being given such low-resolution, information-poor data would be like working with a child’s crayon drawing.

So what then becomes of arrows and their ilk – the scaffolds we once used to scale our knowledge? Computers have no need of them to explain their calculations to themselves. But will we still need to explain curly arrows to them so they can dumb things down for the rest of us?