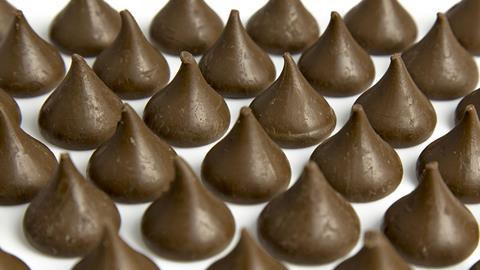 The taste of American chocolate divides continents. Louise Crane reveals the ingredient that explains why

Do you have a favourite type of chocolate? Maybe you prefer the sweetness and smooth mouth feel of a good milk chocolate, or maybe it’s the bitterness of a rich dark chocolate you prefer? But what about chocolate that tastes slightly of parmesan cheese, or even a little like baby sick? Well, thanks to butyric acid, chocolate with that distinct ‘tangyness’ is very popular, as Louise Crane explains…

Butyric acid is one of the characteristic, defining smells of a farmyard and also responsible for the stench of vomit. It is also a vital component in the manufacture of American chocolate. This may seem hard to stomach, but there is an explanation, and it’s all down to how this four-carbon-chain fatty acid reacts with other chemicals. 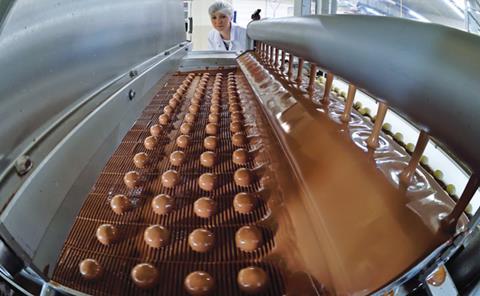 Butyric acid was first observed in 1814 after the curious French scientist Michel Chevrel sniffed out the chemical responsible for gone-off butter’s characteristic odour. Butter production concentrates cow milk’s butyric acid into a glyceride emulsion, and while pleasant smelling when fresh, once butter has gone off the acid is liberated from the glyceride molecules via hydrolysis and contributes to its rancid smell.

If you’ve ever tasted American milk chocolate, especially Hershey’s, and you’re used to British or European chocolate, you’ll probably recall it has a distinctive tangy flavour. This is because the milk in Hershey’s chocolate is treated with butyric acid to make it last longer. Unlike in Britain, where dairy farms are close to chocolate factories, in America the source of milk can be thousands of miles away. During the advent of chocolate’s popularity, the early 20th century, there were limited refrigeration options and slower transport systems than today. This posed a problem – how to keep the milk fresh? The solution back then was to allow the milk to deteriorate, or sour, in a safe way before transportation. 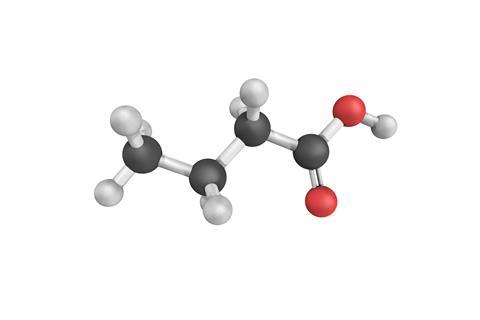 Around the 1930s, Milton S. Hershey, founder of The Hershey Company, pioneered the use of butyric acid to stabilise milk, causing it to undergo a process known as lipolysis. The full method is a trade secret, known simply as the ‘Hershey Process’. American chocolate fans are so used to the sour, cheesy taste that other chocolate manufacturers who don’t use the Hershey process actually add butyric acid to give their chocolate that distinctive, long-lasting tang - which lovers of sweet, creamy British chocolate describe as tasting like parmesan cheese or even baby sick.

The powerful odour of butyric acid has been harnessed in several other products, notably fishing bait. Most carp baits use butyric acid as their ester base, and it is one of the few organic acids that attract both tench and bitterling. The Sea Shepherd Conservation Society used butyric acid stink bombs to disrupt Japanese whaling crews in the Atlantic in 2008, and it has also been used by anti-abortion protestors. Back on the farmyard, it is used as an animal feed supplement because it can eradicate pathogenic gut bacteria. Some scientists think butyric acid could be useful in the management of irritable bowel syndrome, which may be caused by an overgrowth of ‘bad bacteria’ in the gut. 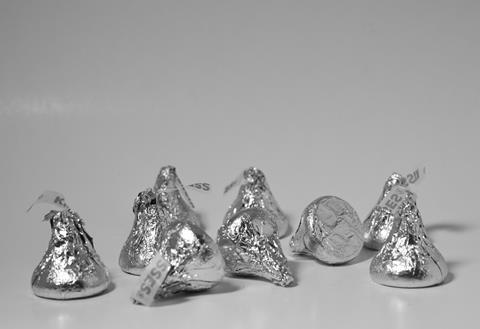 High fibre diets are known to help protect against colon cancer, and butyric acid might be one of the reasons. Anaerobic fermentation converts butyric acid into butyrates, which are an important energy source for cells in the digestive tract. The cancer protecting mechanism is not yet fully researched, though we know that the acid promotes the normal differentiation of abnormal, malignant cells in culture. Another idea under investigation is that lower fibre butyrate-producing foods, particularly those high in fructans such as garlic, can inhibit the growth of human cancer tumour cells in the colon because of the interaction between butyrate and diallyl disulfide, one of the many other chemicals that these foods contain.

Louise Crane with a challenge for chocolate fans. Good luck with that. Next week, Fernando Gomollón-Bel highlights an essential medicine that is just at home in a hairdressers as a hospital…

When you hear the word ‘peroxide’, your first thought might be of the powerful bleaching agent used to turn hair blonde – a convenient chemical for cosmetic use. But benzoyl peroxide is an organic molecule that is actually in the World Health Organization list of essential medicines.

Join us next week to learn more about this acne medication that also whitens teeth and brightens your hair. Get in touch if there’s any compound you would like to hear covered – email chemistryworld@rsc.org or tweet @chemistryworld. Thanks for joining me, I’m Ben Valsler.