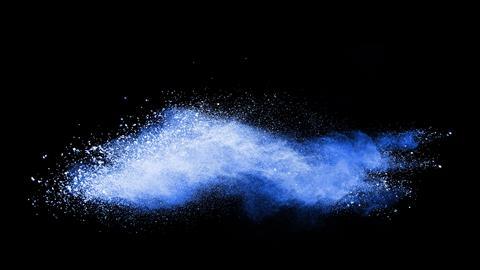 This week, Brian Clegg brings us a versatile compound that’s used in cancer treatment, solar cells and even making beer…

Caesium is one of those elements that feels unfamiliar – it would probably be ‘pointless’ in a periodic table question on the eponymous TV show – which leaves a compound like caesium chloride in inevitable obscurity. Yet, while only about 20 tonnes of this colourless crystalline substance are produced each year, it has a surprisingly wide range of applications. Structurally, the salt is a simple chloride like the more familiar sodium chloride, but because caesium is a lot closer to chlorine in size, it forms a crystalline structure where each caesium ion is surrounded by eight chlorines at the corners of a cube. By contrast, in sodium chloride, each ion is surrounded by six of its counterpart in an octahedral shape.

The best-known uses are probably those involving a radioactive form of the salt. Caesium chloride with the non-radioactive caesium 133 occurs naturally, as a trace constituent in some minerals and in mineral water (which is where caesium was discovered). It is most concentrated in a mineral called pollucite, also containing aluminium and silicon amongst other constituents, where the caesium makes up around 20 per cent of the whole. Elemental caesium itself is usually produced from the caesium chloride extracted from the mineral. But to create the radioactive form of the compound, it is enriched with caesium isotopes, particularly caesium 137, produced in the waste of nuclear reactors. 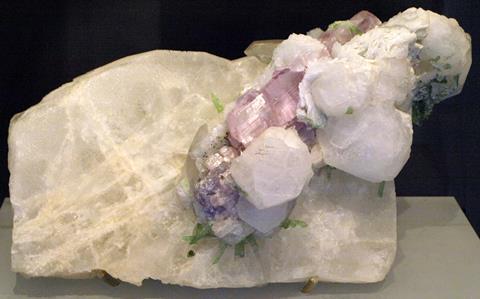 An example of the mineral Pollucite on display in the Vale Inco Limited Gallery of Minerals at the Royal Ontario Museum.

This radioactive form is used to treat cancers and is relatively unusual in medical radioisotopes in being water soluble. It’s generally preferred that a compound for this use can’t be easily spread in an accident, but caesium chloride packs a lot of radioactivity into a small volume, making it ideal for treatments where the radioactive material needs to be accurately sited.

Generally, the radioactive form is kept in highly secure containers, but in 1987 a caesium chloride source containing about 93 grams of the salt was stolen from an disused hospital in Goiania, Brazil. The thieves partially broke open the container and sold it on for scrap. Because the exposed caesium chloride gave off an eerie blue glow, it proved a popular talking point – just as radium did when first discovered by the Curies. Samples of the glowing powder were shared around to the extent that the scrapyard owner’s six-year-old niece used it as a skin decoration. She was one of four who died as a result of the exposure, with over 200 more suffering significant radioactive contamination.

Thankfully, the non-radioactive form has relatively low toxicity and some interesting tricks up its sleeve. One of the most common uses of the compound is in ultracentrifugation. Here, extremely high speed centrifuges, producing a g force of up to a million times that of Earth surface gravity, are used to separate out materials using a gradient of increasingly high concentrations of a dissolved compound. When that substance is caesium chloride it has proved ideal for splitting off nucleic acids, because of its good water solubility and relatively high density. A sample of DNA can be broken down this way into sections with variants in the base pairs linking the dual helix. Similarly, mitochondrial and nuclear DNA can be separated, or the simpler RNA molecule can be removed from DNA samples. 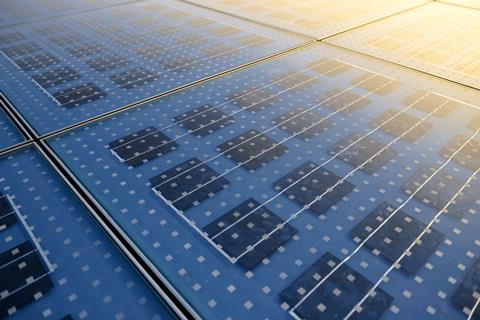 Although caesium chloride itself is only slightly electrically conductive, a thin layer of it can enable the production of electrically conductive glass, and finds an experimental application in boosting the efficiency of solar cells. It is also found in specialist ultraviolet excimer lamps, solders and, perhaps most surprisingly, in the production of beers and mineral waters. It is described as being used to ‘improve the taste of mineral water’, though it’s hard to see exactly how – one commentator described sampling caesium chloride: ‘[It] does NOT taste very good at all, and sort of burns a bit. It’s very metallic in taste and has a horrible aftertaste.’ The caesium compound caesium carbonate is sometimes used in small quantities to improve the foamy qualities of the head on a beer, but it’s not clear how the chloride enhances the brewing process.

When a compound like caesium chloride gets a bad name, as it certainly did with the Goiania disaster, it’s hard to see it as anything other than a problem to be eliminated. But we have to remember that the radioactive form of the compound has a beneficial medical use, and that many of its more interesting applications involve the harmless stable form. Unlike the TV programme where caesium features regularly, caesium chloride is anything but pointless.

Brian Clegg on caesium chloride. Next week, Rowena Fletcher-Wood finds how, with gallium nitride LEDs, impurity is the key…

Join Rowena Fletcher-Wood next week. But until then, get in touch with any questions, comments or compounds that you would like to know more about or tweet @chemistryworld. Thanks for listening, I’m Ben Valsler.