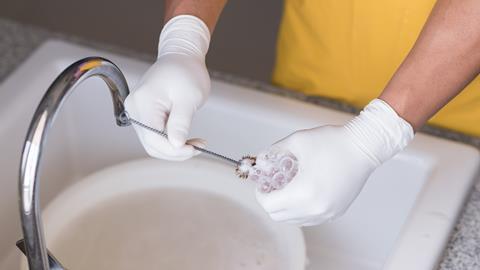 This week, an insight into the life of a chemistry lab intern. And reminiscing about this is Brian Clegg:

Between school and university, with a shiny new chemistry A-level under my belt, I spent the summer working in an industrial lab. As the lowest of the low, my jobs were those that no one else wanted to do. Our lab's role was testing incoming raw materials at a plant that specialised in fatty acids. The worst job was, without doubt, being 'lumper bumper' - a nickname of uncertain origin for going out in all weathers and climbing up on top of chemical tankers to take samples of the hot contents. At best this meant handling sweet-smelling cocoa nut oil. and at worst, reeking tallow. After these excursions, the sampling equipment joined the endless piles of dirty labware that were also my responsibility. And that's where I got my introduction to carbon tetrachloride. 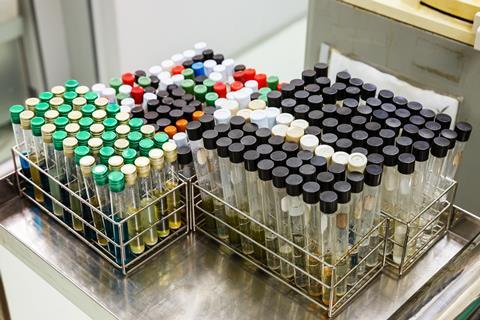 At the time, carbon tetrachloride was an almost universal lab cleaner. We sloshed it around with abandon, making ready use of this solvent's ability to dissolve difficult-to-remove substances like oils and fats. Now I look back in some horror: today, we know carbon tetrachloride causes nervous system and organ damage and it may well be a carcinogen.

This simple compound of a carbon atom with four chlorine atoms attached is a clear, colourless liquid at room temperature and has a heady, almost fruity smell. It was first made in 1839 by Henry Victor Regnault, probably better known as a physicist, but earlier in his career he was a busy investigator in organic chemistry. He took chloroform, which is a similar molecule with one hydrogen atom instead of a chlorine, and reacted it with chlorine gas to make carbon tetrachloride. Today, the starting point is usually readily available methane - CH4 - and plenty of chlorine, usually produced by electrolysis of salt water.

In the early 20th century, carbon tetrachloride found a multitude of uses. As a superlative solvent, it was an obvious product for dry cleaning. This strangely named process (it is only dry in the sense that water isn't involved) is used to clean fabrics that would be damaged by conventional washing. The first dry cleaning agents, dating back to the mid-19th century, were petrol and kerosene, but these were embarrassingly flammable, so there was a move to find solvents that could still do the job but wouldn't burst into flames or cause machines to explode. 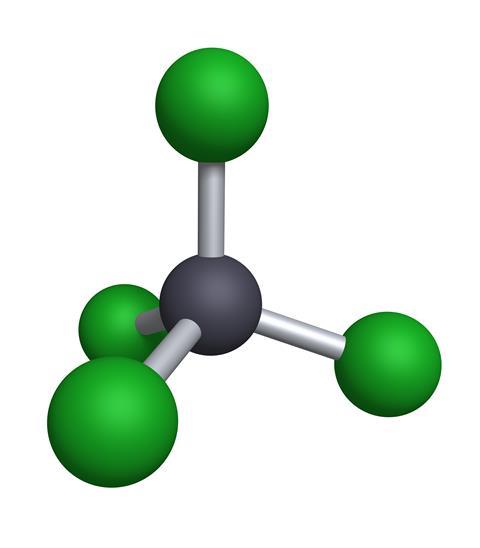 Carbon tetrachloride seemed an ideal choice. Easily and cheaply made, it performed well, but the discovery that it was also highly toxic meant that by the 1930s it had been replaced by tetrachloroethylene (known in the trade as 'perc' for its older name perchloroethylene), which has continued in use to the present day, though this too is now being replaced because of concerns about its carcinogenic potential.

Carbon tet (as it was affectionately known in the lab) also found its way into small fire extinguishers. A fine spray would be vaporised by the heat of the fire and would then put out the fire by suppressing the combustion reactions.

At the opposite end of the temperature spectrum it helped many an early refrigerator do its job. Although initially used as a refrigerant in its own right, its main role was in the production of freon gases like dichlorodifluoromethane. This was the biggest industrial application of carbon tetrachloride until it was discovered that such chlorofluorocarbon (or CFC) gases were having a serious impact on the ozone layer.

Perhaps most strangely, it was also a favourite of stamp collectors. Often the watermark on the paper is the only way to tell for sure between variants of a stamp, so stamp collectors have always been interested in ways to make them more visible. Nowadays they are likely to use specialist lamps, but a few drops of carbon tetrachloride were at one time considered an excellent way to reveal the watermark without damaging the paper. It would even remove grease marks in the process. 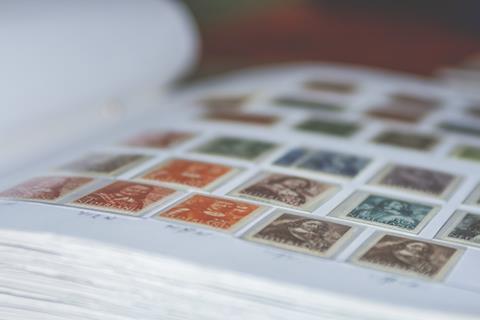 To early 20th century users, carbon tetrachloride seemed something of an all-purpose wonder. But the cracks began to show. Breathing the vapour made workers feel initially intoxicated, then nauseous, dizzy and prone to headaches. Over time it was discovered that exposure to carbon tetrachloride caused damage to the central nervous system, and high doses would inhibit liver and kidney function. At the extreme it can kill. It is also suspected that it is a carcinogen, though this has not been clearly established.

To make matters worse, carbon tetrachloride can be converted into phosgene when strongly heated. This gas, known for its odour of newly mown hay, was used to deadly effect in the First World War. Phosgene blocks the proteins that enable oxygen to be processed by the alveoli in the lungs, leaving the victim airless and dying. So those carbon tet fire extinguishers became unintentional chemical weapons. And to cap it all, as an accomplice to  destroying the ozone layer, it harms our environment, as well as our health.

These problems have resulted in a huge decline in carbon tetrachloride's use. It is certainly unlikely to be handled as casually in labs as it once was and, although still used to make refrigerants, it is very much yesterday's compound. The heyday of carbon tetrachloride was a different age. A time when risk came a distant second after novelty. And yet the simplicity of its structure and the youthful exuberance of its original uses mean that it should not be forgotten.

And thanks to this podcast, it won't be. That was science writer Brian Clegg, taking us back to a time when carbon tetrachloride was in its prime. Now, next week, we continue looking into the past and dig down to reveal the dirtier side of the begninnings of biotechnology.

When we think of biotechnology, we think of shining stainless steel reactors, of men and women in white lab coats, of pipettes, syringes and computer controlled processes in clean rooms. We do not normally think of shovels, dung, urine rusty man-sized cauldrons. But such were the instruments and the reagents of the petermen, arguably the first government chemists. These disreputable but well organised bands of men wreaked havoc on 17th century farms, digging up barns and stables in a state-sanctioned search for their namesake, saltpetre; otherwise known as potassium nitrate.

And to find out the uses of patassium nitrate that make it worth casudiung such destruction, join Lars ?hrstr?m in next week's Chemistry in it's element. Until then, thank you for listening. I'm Meera Senthilingam.