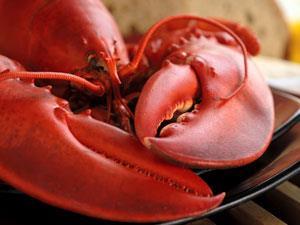 This week, look closely at that seafood platter, as you’ll have a newfound appreciation for what you find there. Explaining more is Emma Stoye…

Chitin isn’t something we hear a lot about – bizarre, given it’s one of the most abundant organic compounds in nature. You’ve almost certainly encountered it at some point, especially if you’re a fan of seafood or mushrooms. It is a structural component of the shells and exoskeletons of crustaceans and insects, and makes up the cell walls of fungi. 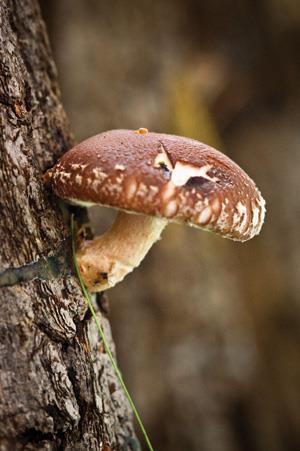 Pure chitin is transparent and quite flexible, but when it makes appearance in nature it is often part of a composite material. In crustacean shells, for example, it is combined with calcium carbonate – this makes the chitin stronger and the mineral less brittle. In insect cuticles it is mixed with the stiff protein sclerotin and coloured pigments.

Chitin was discovered in 1811 by Henri Braconnot who was director of the Botanical Gardens at the Academy of Sciences in Nancy, France. He identified an extract from mushrooms that wouldn’t dissolve in sulphuric acid, which he named ‘fungine’. This was renamed ‘chitin’ a few years later in 1823 when another French scientist called Auguste Odier isolated it from beetle cuticles, and named it after the Greek word for ‘tunic’, ‘chiton’.

In the 20th century scientists began to investigate the polymer’s potential uses, and discovered a lot of very useful properties. Chitin is non-toxic and biodegradable, and therefore more environmentally friendly than most synthetic polymers. It is also an anti-microbial, providing the fungi and animals it coats with anti-disease defences.

Interest in the commercial applications of chitin grew in the 1930s and early 1940s, but took a backseat for many years because of competition from synthetic polymers. Large-scale production of chitin was kick-started in the mid-70s when regulations were introduced to limit the dumping of untreated shellfish waste in coastal waters. Chitin can easily be extracted from crab, lobster and prawn shells using solvents, and producing chitin became an economical way to comply with the regulations and dispose of thousands of tons of shellfish waste. 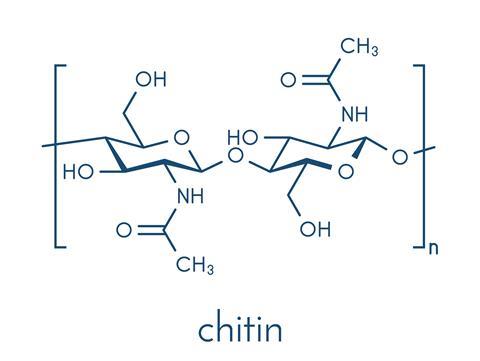 Today, chitin has many applications. It’s found its way into various creams and cosmetic powders, and is one of the preferred materials for surgical stitches, particularly ones that dissolve over time and don’t need to be removed.

Its derivatives also have several applications, the most useful is chitosan, which can be extracted directly from crustacean shells using sodium hydroxide to deacteylate the chitin. Chitosan’s properties are similar to chitin’s, and it has the added bonus that it is more water soluble. It is used as an antibacterial lining for bandages and wound dressings, as a coating for seeds to boost disease resistance and even as an agent to prevent spoilage in winemaking. It has recently become popular as a dietary supplement, as some studies claim it can aid weight loss by binding to fat in the digestive system, reducing the amount that can be absorbed. This is controversial, and so far there is a lack of concrete evidence that this actually works. Nevertheless, chitin science continues to go from strength to strength, and the estimated global market for chitin and its derivatives is forecast to reach 63 billion US dollars by 2015.

Not bad for bits of leftover lobster.

Valuable lobster though. Chemistry World’s Emma Stoye there with the chemistry of chitin. Next week, a compound that’s invaded many parts of our daily lives.

It’s hard to imagine a world without electricity. Almost every piece of technology we use relies on it, and in turn we rely on materials which conduct electricity. We’re all familiar with organic polymers. They’re just as ubiquitous as electricity in the modern world, and some examples are polythene, nylon, polystyrene and Teflon. Organic polymers are huge molecules, made up of hundreds to millions of small, carbon-based units called monomers, which are linked together to form the polymer, or macromolecule. Organic polymers are everywhere around us for several reasons – they are cheap and easy to make, they are strong yet light, and most importantly, they can be easily processed into any desired form, from polythene shopping bags, to Kevlar aeroplane wings.

And discover the chemistry enabling this versatility by joining David Lindsay in next week’s Chemistry in its Element. Until then, thank you for listening, I’m Meera Senthilingam.