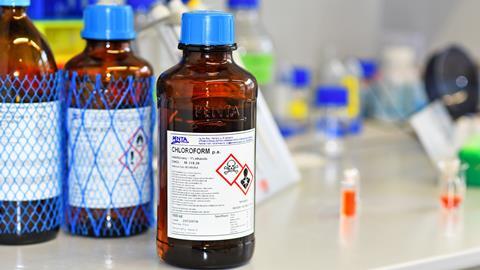 A simple yet toxic molecule

This week, a chemist, a pharmacist and a medic walk into a lab. And completing that story, here's Akshat Rathi.

Chloroform is a simple molecule. A single carbon atom bonded to three chlorine atoms and one atom of hydrogen. It was discovered by three researchers from different countries, all independently, in around 1831. The only researcher amongst them who was a chemist by profession was Justus von Liebig, the German giant of analytical and organic chemistry. Of the other two researchers one was a pharmacist and one a physician. 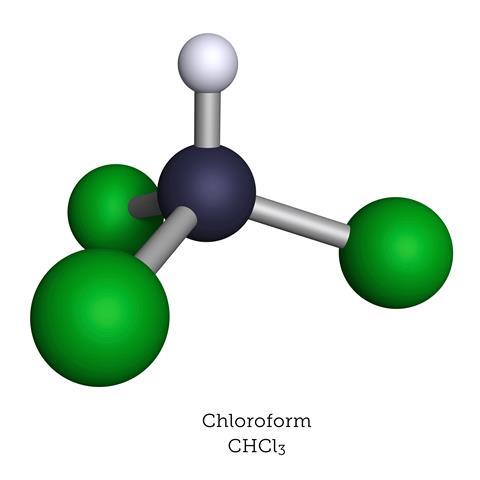 Curiosity begs the question, why would a pharmacist and a medical doctor be involved in seeking new chemical entities? We should remember that this was a period in history when modern medicine was only just beginning to take root, and researchers from various fields had started to search for new chemicals with medicinal properties. One such property that they were seeking was that of an effective anaesthetic.

Having relied for years on opium and alcohol for pain relief, the introduction of diethyl ether as an anaesthetic in 1846 was a revelation for the medical profession. However, ether produced undesirable post-anaesthetic effects such as nausea and vomiting. Chloroform began to be used by British physicians as a better alternative in the late 1840s. It soon became very popular, owing to the combination of two factors: a paper describing the exact procedure for its use, published in the Lancet medical journal in 1847 by Scottish doctor James Young Simpson; and because Queen Victoria insisted on using chloroform while giving birth to Prince Leopold in 1853.

But as the use of chloroform increased, the news of unexplained deaths started coming in. It turned out that chloroform has a much lower therapeutic index than ether, which is to say that the difference between the dose needed to produce the anaesthetic effect and the dose needed to cause cardiac arrest is much smaller.

The use of chloroform as an anesthetic saw a sudden decline, and rightly so as chloroform does come with its share of toxicity. An oral dose of 10 milliliters can cause death due to cardiac or respiratory arrest.

In 1870, an analysis of 80,000 operations performed with the aid of chloroform showed that the risk of a patient dying was 1 in 2500. In comparison, using ether resulted in only 1 death for every 23,000 operations. By 1875, the British Medical Journal noted that the number of operations carried out under ether again exceeded those carried out under chloroform. The chemical was relegated to use by kidnappers in adventure stories to knock out their victims. 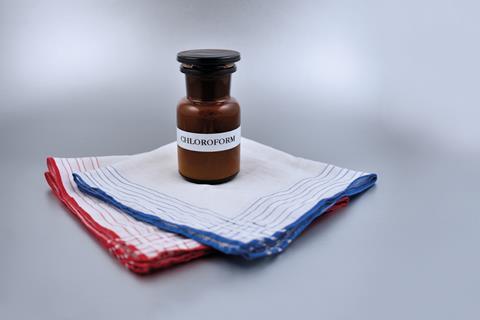 Storing chloroform for long periods of time can also be dangerous.  Oxidation of chloroform by oxygen in the air can generate phosgene, COCl2, which was used as a chemical weapon during the first world war. Phosgene, although a gas at room temperature, readily dissolves in chloroform, where it remains until it is chemically treated for removal. Adding a stabiliser like ethanol or pentene can prevent the oxidation if long term storage is required.

Despite its toxic past, today chloroform finds many uses in industry. It is used as a feedstock to make tetrafluoroethene - a key intermediate in the manufacture of the non-stick polymer Teflon. Chloroform is commonly used as a solvent because of it is relatively unreactive nature, high miscibility with most organic solvents and convenient volatility. Deuterochloroform, CDCl3, in which the hydrogen atom is replaced by its heavier isotope deuterium, is the most commonly used solvent for nuclear magnetic resonance spectroscopy, because it easily dissolves a wide range of different molecules.

Also, of interest to synthetic chemists is its use as a source of dichlorocarbene, CCl2. Using a base like hydroxide the hydrogen atom and one of the chlorine atoms can be removed. This highly reactive molecule can then be used to bolt extra carbon atoms onto other molecules like alkenes to make 3-membered cyclopropane rings, or to aromatic rings to make aldehydes. 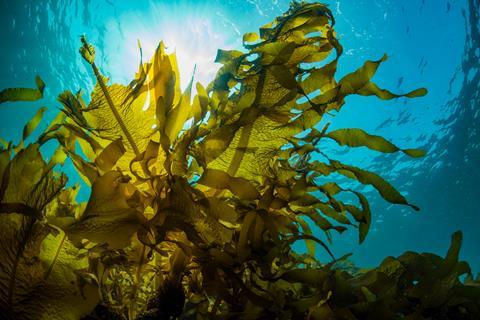 But the story of chloroform is not yet over, it has another twist in it. All our discussion so far has been about chloroform acquired from synthetic sources, but it is estimated that greater than 90 per of all atmospheric chloroform is actually of natural origin, mostly produced by seaweeds and algae as part of their metabolism, by combining organic molecules with chloride from seawater. Whether those seaweeds are aiming to knock out animals that try to eat them, or just using the abundant chlorine as a handy reagent is not entirely clear.

So some more pieces needed for that puzzle, then. That was Akshat Rathi, with the toxic yet industrially useful chemistry of chloroform. Now next week, more toxicity in the battle of the most toxic form of mercury.

The most toxic mercury compounds are organometallics, containing mercury-carbon bonds. In the early 20th century, people started using them as fungicides on seed grains. They killed fungi, and people too. People ignored warnings on sacks of treated grain because they were in Spanish. Hundreds of people died.  And when a Japanese chemical company discharged mercury wastes into the sea, anaerobic bacteria converted it into methylmercury, which was absorbed by plankton and passed up the food chain through fish to humans. The result was the poisoning of thousands of people at Minamata.

But dimethylmercury beats them all hands down for toxicity.

And to find out the chemistry behind the 'super-toxic' dimethylmercury, join Simon Cotton in next week's Chemistry in its element. Until then, thank you for listening. I'm Meera Senthilingam