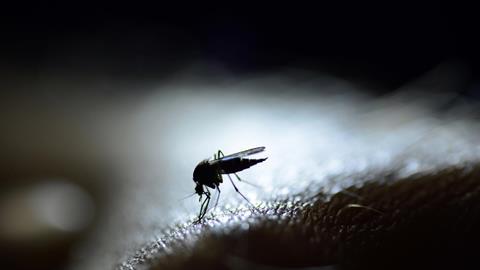 Investigating one of the best defences we have against biting bugs, here's Phil Robinson

The smell and feel of this week's compound may get some of you reminiscing about exotic holidays, but it's important to remember its main role keeping those biting bugs at bay. And spraying the chemistry of this compound into the air, it's Phil Robinson:

Mosquitoes, gnats, midges, ticks. Just saying their names can make you start to itch and swat your arms. But biting insects aren't just a minor annoyance on a summer's evening or during a holiday to the tropics - they can carry some really nasty diseases.

According to the UK Health Protection Agency, more than 1500 people are diagnosed with malaria in the UK each year, having acquired the disease abroad - more often than not in Africa. Other deadly mosquito-borne diseases include dengue fever, yellow fever and west Nile virus. Lyme disease-carrying ticks are another concern. 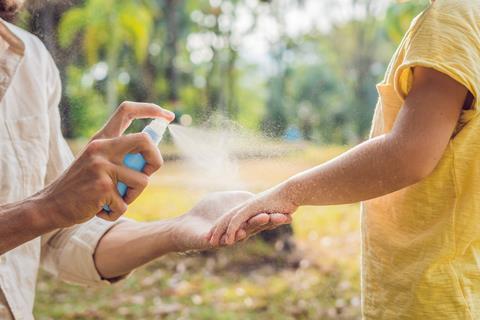 One of the best defences we have against being bitten by insects is insect repellent. And the most common active ingredient in these is a slightly yellow oily liquid called N,N-diethyl-meta-toluamide, or DEET.

DEET was developed by the US Army in 1946 to protect their personnel from insect bites - following their experience of jungle warfare in the second world war, where soldiers found themselves fighting infections as much as battles.

DEET has been available to buy commercially since 1965 and today it can be found in hundreds of products. DEET can be applied directly to the skin or to your clothing, and products range from sprays to creams, lotions, foams and towelettes. 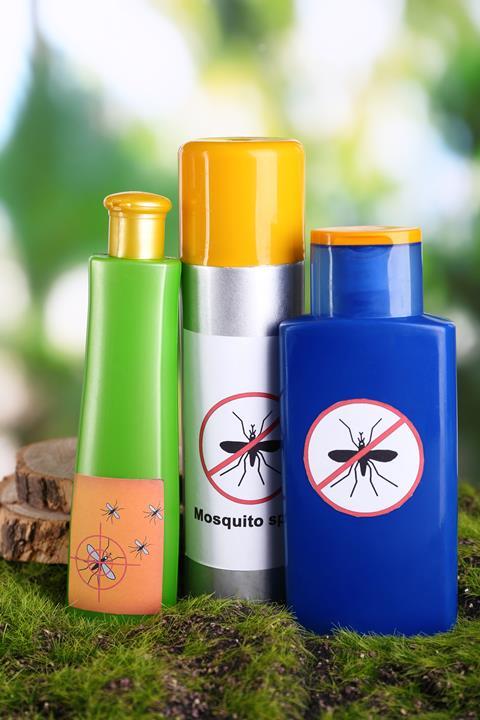 The concentration of DEET in these products varies from 4 to 100%. But the concentration you need doesn't depend on the number of bugs circling you as you apply the stuff, as you might think. Instead, the concentration determines how long you will be protected for. A product containing 10% DEET will last for 90 minutes or so, while a 100% product could last up to 12 hours.

It may save thousands of lives a year, and help millions more avoid the unpleasant itching associated with insect bites, but the use of DEET isn't without its controversy. It is a very effective solvent that can remove nail polish, strip paint and even melt plastic. It therefore isn't a great surprise that some people would be a tiny bit nervous about putting DEET on their skin. It has also been implicated in neurological damage in some animals. But the evidence suggests that, used correctly, DEET is pretty harmless to both us and our environment. And the official line from both the UK and the US governments is that the good it does far outweighs the risks of a few minor issues such as the slight skin irritation it can cause.

Something scientists are less sure about, though, is just how it works. And discussion on this topic has become somewhat heated in recent years. It is a long-standing belief that, rather than repelling insects, DEET actually conceals us from insects. Bugs have olfactory - or odour - receptors on their antenna that sniff out lactic acid in our sweat and carbon dioxide and 1-octen-3-ol in our breath, and it was thought that DEET blocks these bug 'noses' so that they can't smell us. In March 2008, a team led by Leslie Vosshall at the Rockefeller University in New York published a paper that finally provided proof for this hypothesis. They demonstrated that DEET blocks three odour receptors in malaria-carrying mosquitoes, therefore hindering their ability to locate their potential victims. 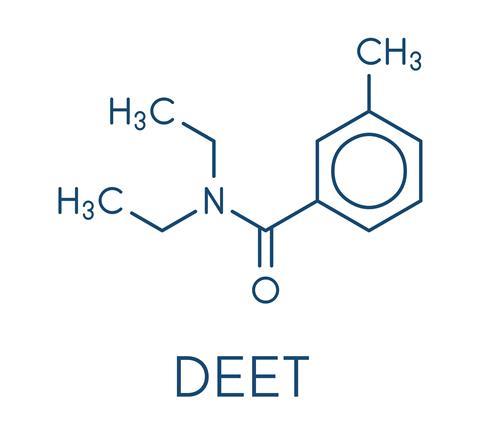 But not everyone was convinced, and in August the same year, a team at the University of California Davis reported contradictory results. They claimed that DEET doesn't block odour receptors, but that instead the insects smell DEET directly and then avoid it because they don't like it - suggesting DEET actually does repel insects.

The topic was back in the news again in September 2011, with Leslie's Rockefeller team publishing further evidence for her theory that DEET interferes with the odour receptors of mosquitoes, so the buzz of debate continues.

One reason for all this effort to understand how DEET works is to arm the scientists worried about the possibility of DEET resistance in mosquitoes. In 2010, a team at Rothamsted Research in the UK reported some concerning results. They were able to breed mosquitoes resistant to DEET's effects remarkably simply. They showed that it is an easily inherited genetic trait that can be rapidly evolved in later generations due to it being controlled by a single dominant gene. Worrying indeed!

Of course, many of us are unfortunate enough to know firsthand that using DEET doesn't guarantee you'll stay bite-free. This, coupled with the resistance concerns, has led to work towards developing alternative, even more effective insect repellents. The US Centers for Disease Control and Prevention have approved the use of the piperidine derivitave picaridin and the natural lemon eucalyptus oil as insect repellents.

But to date, DEET - with its unpleasant smell, greasy feel, and cloak of controversy - remains the gold standard worldwide for keeping those biting blighters at bay.

And as a result, also remains your trusted sidekick in hotter climates. That was Chemistry World's Phil Robinson with the insect-repelling chemistry of DEET. Next week, another compound you wear that sits just as tightly on your skin.

One chemical compound inevitably springs to mind when you see all those athletes powering around the cycle track, straining at the oars, or breaking the tape in the 100 metres final. And that compound is Lycra.

It was invented in 1958 for the chemical giant DuPont as a manmade replacement for latex. Although Lycra is not as robust as the natural rubber, it has the big advantage that it is able to be spun or extruded into fibres, which makes it much easier to manufacture. Of more interest to athletes is probably its breathability: clothing made out of latex has no ability to breathe, leaving the wearer very uncomfortable. But the woven structure of a fabric with Lycra means that the wearer avoids feeling that they are shrinkwrapped, while still having the sleek look and minimum air resistance demanded by a modern athlete.

And to find out just how this compound enables your body to breathe while enduring exhausting exercise, join Brian Clegg in next week's Chemistry in its element. Until then, thank you for listening. I'm Meera Senthilingam.