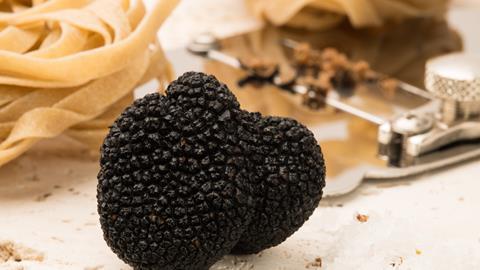 Simon Cotton unveils the chemistry behind this unpleasant-smelling compound

This week, an unpleasant-smelling compound which, in the right context, can get your tastebuds going. Explaining more, here's Simon Cotton: 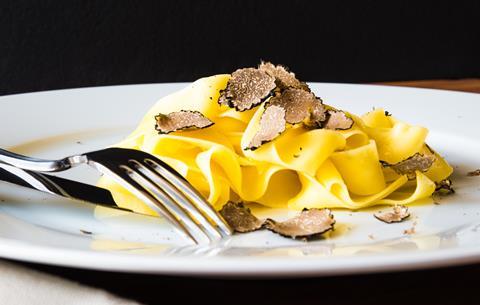 Brillat-Savarin was thinking of the Périgord black truffle, Tuber melanosporum. For hundreds of years, chefs have added thin slices of the truffle to give a certain je-ne-sais-quoi to everything from omelettes to roast chicken. The truffles are now prized and rare; they have to be searched out, using the sensitive noses of pigs or dogs to detect their odour. It is only within the past twenty years that a French chemist named Thierry Talou has identified the molecule responsible for that heady scent. Some scientists thought that the pigs were detecting a steroid, but Talou believed that it was organic compounds of  sulfur, and put his theory to the test. He buried in the ground samples of the steroid; of real truffles; and of his synthetic aroma. The pigs ignored the steroid, but made straight for either the real truffles or Talou's aroma mixture. His key molecule was dimethyl sulfide.

It took a team of 51 European researchers five years to decode the genome of the Périgord black truffle. In 2010 they reported that the truffle gets sulfate from the soil and uses a series of enzyme-regulated reactions to turn the sulfate into methionine, one of the two sulfur-containing amino acids, which is then used to make dimethyl sulfide and similar molecules. 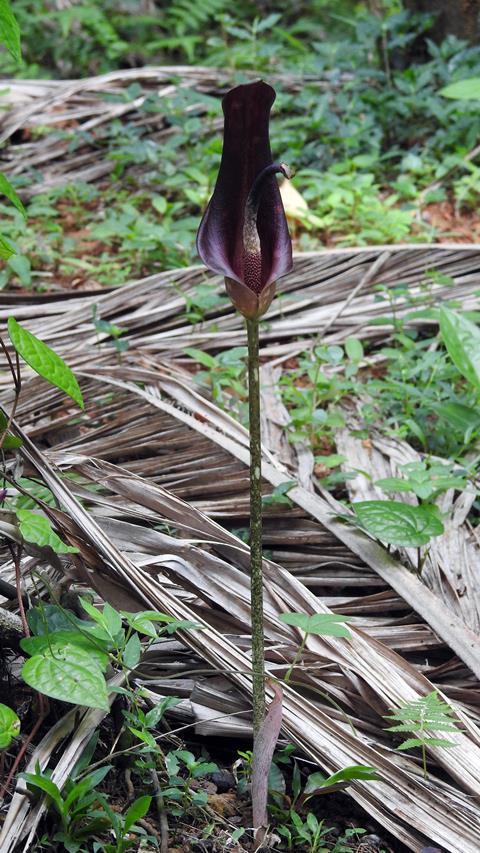 Dimethyl sulfide has a smell that is usually described as 'rotting cabbage', 'cooked cauliflower' or just plain 'unpleasant', though when diluted it is not so disagreeable. The dead horse arum lily and other very smelly plants use dimethyl sulfide, and similar molecules, to attract insects for pollination. You can find dimethyl sulfide in many vegetables, particularly when overcooked; it also contributes to the smell of cheeses like Cheddar and Camembert.

When cheeses ripen, enzymes break down proteins to give free amino acids, and methionine is transformed into several sulfur compounds, especially dimethyl sulfide. When mixed with lots of other smelly molecules, it can be quite pleasant. In small quantities, it can enhance the bouquet of wines and beers. But it has to be admitted that dimethyl sulfide is a main odour ingredient of a human fart.

It was the great eco-guru James Lovelock who suggested that the most important thing that dimethyl sulfide does is to help regulate the whole global climate cycle. Phytoplankton are at the very bottom of the food web in the oceans. Ultimately they are the source of food for everything that lives there, from tiny zooplankton up to the biggest whales.

The phytoplankton produce a substance called dimethylsulfoniopropionate (DMSP), when phytoplankton are eaten - by zooplankton or small fish - DMSP gets broken down to dimethyl sulfide, which attracts more zooplankton to feed. About 90 per cent of the dimethyl sulfide is broken down before it gets into the atmosphere, but it is believed that 50 million tonnes is released into the air each year. Oxygen in the atmosphere eventually oxidises the dimethyl sulfide to  sulfate, which helps trigger cloud formation, and it is clouds that reflect solar energy back into space, cooling the earth. 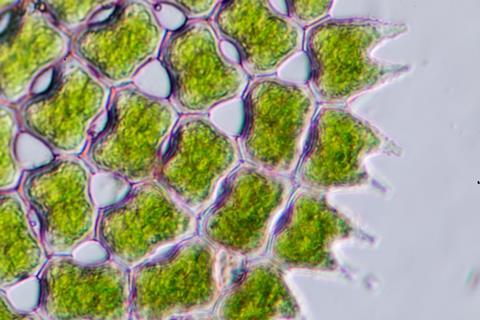 It's not just zooplankton that recognise dimethyl sulfide, several foraging seabirds like the wandering albatross and Leach's storm-petrels are attracted to it; they use it to locate feeding areas with lots of zooplankton, and hence the fish that feed on it. So do penguins and seals. When you see a seal sticking its nose out of the water, it is sniffing for dimethyl sulfide, because dimethyl sulfide means there is seal food around. In other words, dimethyl sulfide is important in the ecology of the oceans.

Andy Johnston's research team at the University of East Anglia has been studying dimethyl sulfide production. They isolated a gene that turns DMSP into dimethyl sulfide from bacteria growing on the roots of a saltmarsh grass at Stiffkey on the north Norfolk coast. They put that gene into E. coli, and found that when those bacteria were fed DMSP, they produced the characteristic 'rotten cabbage' smell. In fact one day when they opened a bottle of the dimethyl sulfide-producing bacteria out on the marsh, lots of seabirds homed in on the scent.

So even if you cannot go on a truffle hunt, the next time you go to the seaside, take a whiff of the healthy seaside air, and you are still smelling dimethyl sulfide, a molecule that pops up all over the place.

All over the place indeed - cheese and truffles, cloud formation, food sources for wildlife, and how could we forget, farts. That was Simon Cotton with the odorous and tasty chemistry of dimethyl sulfide. Now, next week, a compound we're all far too reliant on, but it certainly does fight its corner well.

Petrol has 15 times the energy per unit weight of TNT. The reason we think of TNT as packing such a punch is that it releases its energy so quickly - but a kilogram of petrol has much more oomph than a kilogram of TNT.

Meera Senthilingam
And to find out just what petrol is made up of, and how it compares to other fuels and sources of energy, join Brian Clegg in next week's Chemistry in its element. Until then, thank you for listening. I'm Meera Senthilingam.