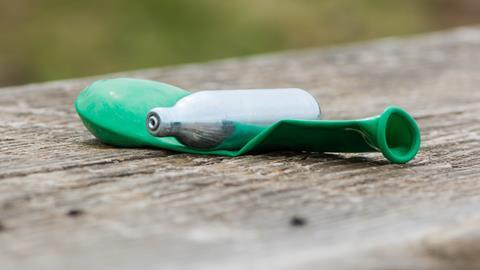 From Preistley's early experiments to the latest 'hippy crack' phase, we take a look at the history of laughing gas

This week, prepare to party like it's 1799. Hosting the celebrations, or perhaps clearing them, it's Brian Clegg:

If you are clearing up the debris of a party, you may come across some small silver cylinders, the same size and shape as those that powered that most elegant of Edwardian bar essentials, the soda siphon. But unlike the fizz dispenser, these party cylinders are likely to have contained nitrous oxide, N2 O, more properly known as dinitrogen monoxide. 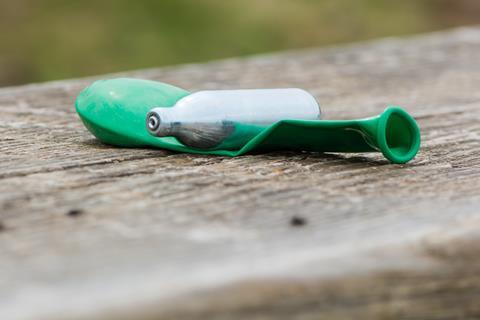 The cartridges of the gas used at parties were designed to power catering quantities of squirty cream in devices known as 'cream chargers', but the manufacturers have discovered that they are selling far more than the catering industry could ever use. What was an industrial propellant has become a recreational drug.

Nitrous oxide was one of a number of gasses first identified by Joseph Priestley. His 1774 work Experiments and observations of different kinds of air was published while working for Lord Shelburne, the Marquis of Landsdowne, at the elegant Bowood House. In it, he describes his 1772 experiments using sunlight, focussed with a large burning glass, to encourage the reactions of various chemicals. Alongside his famous discovery of oxygen, he reacted iron filings and nitric acid, passing the resultant gas through water to produce 'diminished nitrous air' - what we would call nitrous oxide. Now it is usually made by heating ammonium nitrate, which breaks down to give nitrous oxide and water.

It was quite early on that nitrous oxide was discovered to be an anaesthetic. Humphry Davy, before his days at the Royal Institution, experimented on its use in the late 1790s, under the guidance of Thomas Beddoes at the short-lived 'Pneumatic Institution for relieving Diseases by Medical Airs' in Bristol. But it wouldn't be practically used until taken up by a Boston dentist in 1844, and wider medical use came in around 20 years later, first in the United States and then in Europe.

The gas is still a major resource in the medical world - many hospitals will have it available from a piped system in the wall alongside oxygen and air. Where major surgery is involved it was found that nitrous oxide wasn't sufficient alone as an anaesthetic. Initially it would be supplemented with ether, or more recently with a compound like isoflurane. But nitrous oxide is still widely used to provide a lower level of anaesthesia - most famously in a 50:50 mix with air in the 'gas and air' provided during childbirth -  and as the initial gas used before a stronger anaesthetic is introduced.

The discovery that nitrous oxide could make a party go with a swing is nothing new - its nickname 'laughing gas' dates back to at least 1819, when The Times wrote of 'chymical experiments' where 'laughing gas will be exhibited'. It was used recreationally as early as 1799, well before its use as an anaesthetic, and in the early 19th century laughing gas parties were all the rage. The poet Southey commented 'I am sure the air in heaven must be this wonder-working gas of delight'. Groups of people would take turns to sniff at a jar of the gas, collapsing on the floor from dizziness and in fits of uncontrollable laughter. In a buttoned-down age, the sheer lack of restraint brought about by the drug must have been particularly remarkable. 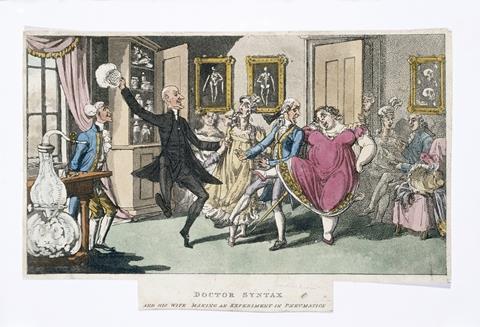 Doctor and Mrs Syntax, with a party of friends, experimenting with laughing gas. Coloured aquatint by T. Rowlandson after W. Combe.

This use of nitrous oxide seems to have largely died out in the 20th century, except among the medical profession and particularly dentists, who had more unsupervised access. But the production of cylinders for cream chargers has now made the compound more readily available than ever.

Nitrous oxide is thought to be relatively harmless. It is only addictive in the psychological sense - in the same way that theme park rides or cheeseburgers are addictive because we like the effects they produce - and it isn't poisonous. Nevertheless it has produced at least one death from asphyxiation - if your lungs are full of nitrous oxide, you aren't getting any oxygen - and the way that a small amount of the gas can render someone semi-conscious makes it easy for a user to get into danger.

Although the compound's effects on the body are its best source of fame and infamy, it is also an effective oxidiser, which has found it a role in both motor racing and rocketry. In racing car engines, nitrous oxide can be used to give a power boost by providing extra oxygen to the fuel.

In rocket motors, nitrous oxide has the advantage of being safer than most alternatives. It has been used since the early days of Robert Goddard and was employed in the X-prize winning SpaceShipOne.

We also shouldn't forget the proper use of those cream propellant cylinders. Cream reacts badly with most aerosol propellants - carbon dioxide, for example, tends to curdle it because it produces carbonic acid when it dissolves. Nitrous oxide not only leaves the cream undamaged, but by excluding air prevents it from going rancid.

Though nitrous oxide has both valuable and dubious uses, it is certainly a problem when free in the air. It's a powerful greenhouse gas - at least 200 times as strong as carbon dioxide, though there is a lot less of it in the air - and is produced both naturally by bacteria and also from nitrogen-based fertilisers. Despite its downsides, though, it's hard not to feel positive about a substance that has done so much in the medical world to make operations painless and survivable. This gas that makes us laugh deserves an enthusiastic smile.

Are you smiling? Perhaps if not about this compound's beloved role as an anaesthetic, then maybe just in memory of times it's made you laugh. That was Brian Clegg with the pain-relieving and engine-boosting chemistry of nitrous oxide. Next week, try not to scratch.

Mosquitoes, gnats, midges, ticks. Just saying their names can make you start to itch and swat your arms. But biting insects aren't just a minor annoyance on a summer's evening or during a holiday to the tropics - they can carry some really nasty diseases.

According to the UK Health Protection Agency, more than 1500 people are diagnosed with malaria in the UK each year, having acquired the disease abroad - more often than not in Africa. Other deadly mosquito-borne diseases include dengue fever, yellow fever and west Nile virus. Lyme disease-carrying ticks are another concern.

One of the best defences we have against being bitten by insects is insect repellent. And the most common active ingredient in these is a slightly yellow oily liquid called N,N-diethyl-meta-toluamide, or DEET.

And you can find out how this compound comes to our defence by joining Phil Robinson in next week's Chemistry in its element. Until then, thank you for listening. I'm Meera Senthilingam.