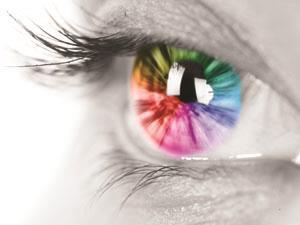 Brian Clegg opens our eyes to the compounds that enable sight

This week, open your eyes! With Brian Clegg.

Of all the complex compounds that make the human body work, it’s hard not to have a particular fondness for the opsins, sometimes called retinylidene proteins. These tangled molecules, formed of a bundle of seven helixes, change their signalling pathways in response to being hit by light. They are the compounds that give us sight. 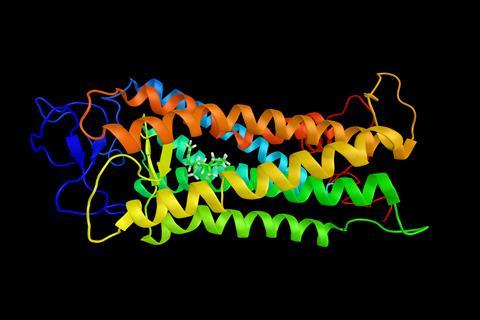 Animals aren’t alone in making use of opsins - some bacteria use different members of the opsin family to produce energy from light - but it is the opsins in animal eyes that make such a difference in their sensory environment.

Probably the best known of the opsins is rhodopsin. The ‘rhod’ part of the name, spelled R-H-O-D, comes from a Latin root meaning ‘rosy’, reflecting rhodopsin’s purplish-red coloration - it is sometimes called ‘visual purple.’ However the name is doubly apt, because rhodopsin is found in a particular type of cell in animal retinas - the rod.

Eyes don’t work like cameras - the brain processes independent signals measuring shading, establishing shapes and so forth, and assembles an artificial picture of the world that we see. These signals come from specialized neurons in the retina of the eye, which are divided into two types, rods and cones. Rods, which are the most numerous receptor cells, with between 90 and 120 million in the human retina, handle shades of light and dark. They are significantly more sensitive than colour cells, capable of detecting four or five photons of light, so they dominate how we see in low light conditions, giving us our monochrome night vision.

The rhodopsin molecule combines the basic opsin with a retinal group, a variant of vitamin A that is a photoisomer. This means the molecule changes shape when it absorbs a photon of light, becoming straighter. This initial change leads to a process within the rod cell that prevents the neurotransmitter glutamate being released and hence causing a kind of negative signal. So our mechanism for sight flags up the presence of photons by reducing an otherwise constant flow of signals, which is very unusual compared with other signalling mechanisms in the body.

There are four further types of opsins found in animals that handle different colour bands. Humans have three of these photopsin types in cone cells in the retina. They are very similar to rhodopsin, but have subtle differences in amino acids that make them respond to different frequencies of light. Each type is sensitive to quite a wide spread of colours, but we usually think of them as handling the three primary colours: red, blue and green. In practice, the ‘red’ photopsin has a peak sensitivity around the yellow/green, but it still responds a lot more to red than the other opsins. These photopsins in the cone cells are a lot less sensitive than rhodopsin, taking tens or even hundreds of photons to trigger them. There are also significantly fewer cone cells - around 4.5 million per retina.

Like rhodopsin, photopsin is made up of a basic opsin bound to retinal to provide the activation by incoming photons. Retinal is typically produced by the body from carotenoids like beta-carotene, the pigment that gives carrots their colour, which may have been the reasoning behind the myth that carrots help you see in the dark. This was actually a piece of propaganda from the second world war, when it was said that Allied airmen had a diet rich in carrots giving them excellent night vision in an attempt to conceal the use of the newly invented radar.

Other animals make use of a range of combinations of opsin types, so, for instance, dogs only have two types of cone which leaves them with the equivalent of red-green colour blindness. They are also less sensitive to brightness than humans, as they have less effective rods, and are particularly poor at colour perception towards the red end of the spectrum - but their sight continues significantly further into the ultraviolet than ours.

The ability to see into the ultraviolet, which is invisible to us, is taken to the extreme among hawks, which have a fourth cone with a different opsin that peaks well into the violet. This extra colour vision is used to spot their prey - small mammals like mice are very difficult for a hovering hawk to see among the grasses, but these creatures tend to leave a trail of urine that glows in ultraviolet, providing a clear marker for the hawk. Insect eyes are also often sensitive to ultraviolet light, and many flowers have ‘nectar guides’, patterns to direct insects towards their sweet rewards, that are only visible in the UV.

As well as the more familiar rods and cones, opsins also feature in photosensitive ganglion cells, a part of the eye whose functions have only been recently understood. These are not used for vision, but take note of light levels to help control the body’s circadian rhythms. They also control the opening and closing of the pupil, the transparent area in the centre of the eye’s iris. The ganglion cells use melanopsin, which is most sensitive to blue light and is significantly different in its amino acid sequences from the opsins used for vision.

It’s strange to think that in some ways the process of animal sight is mechanical, based on the retinal part of the opsin compound changing shape, where machine sight, using the photoelectric effect, seems more sophisticated for being electromagnetic. Yet without those flexing opsins we would not be able to appreciate the colours of a landscape or keep an eye out for dangers. These are compounds whose beauty is very much in the eye

Science writer Brian Clegg there helping us to see with the chemistry of opsins. Next week, we cool down and get minty fresh.

The cooling sensation that it produces means it finds its way into medications for minor complaints like lip balm and decongestants, as well as cough mixtures, mouthwashes and toothpastes, plus treatments for muscular pains and strains.

If molecules were people, menthol would be Arthur Herbert Fonzarelli. So cool. But menthol doesn’t actually cool you -  it just makes you feel cooler.

And discover how this compound improves your cool status by joining Simon Cotton in next week’s Chemistry in it’s Element. Until then, thank you for listening. I’m Meera Senthilingam.