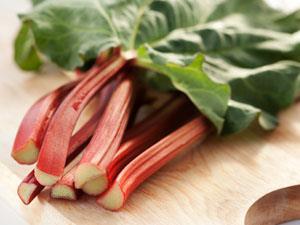 Lars Öhrström finds a link between Napoleon III and rhubarb

This week, we head to France and discover a compound which affected the health of a very well-known commander

The first of September 1870 was a grim day for Charles Louis Napoléon Bonaparte. At Sedan, a small French town close to the Belgian border, the commander of the French army, Patrice de Mac-Mahon, was wounded and the sick and weak emperor, better known as Napoléon III, had to surrender and give himself up as a prisoner to the indomitable Prussian duo von Moltke and Bismarck. So the war of 1870 was lost and the power balance of Europe significantly tilted to the east, and we all know how that ended. 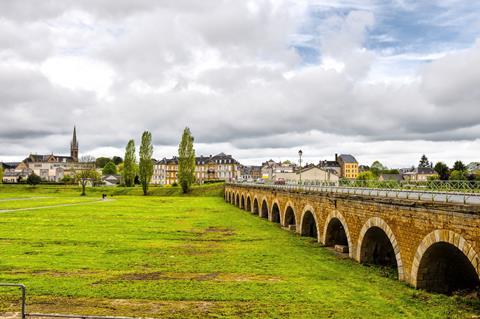 Was this all because of the large crystalline deposits of calcium oxalate that had formed in Napoléon’s kidneys? Probably not: it seems the war was lost as soon as it was declared because of Prussian technical and organisational superiority.

However, the Emperor was not very keen to take up arms in the first place, with some of his advisors the chief warmongers. How well he was able to resist and counteract them while being beset by the very painful condition known as kidney stones is difficult to know.

It is easier to turn to the kidney stones themselves, because these are susceptible to detailed methods of scientific interrogation such as X-ray diffraction. They are formed by two simple components, positive calcium ions, Ca2+, and negative oxalate ions, giving a compound conveniently enough known simply as calcium oxalate.

Oxalic acid is the theme of this podcast and the oxalate anions are what you get, together with H+ ions, when you dissolve crystals of this strong acid in water.  Oxalic acid is a small molecule with the formula C2O4H2, but is perhaps better represented as HOOC-single-bond-COOH: just two carboxylic acid groups joined together to make it the simplest organic di-acid. You may know this chemical as the compound that makes rhubarb have that special acidic tang to the taste, but it is also found in spinach and a number of other veggies that most of us happily eat. It is also part of our normal metabolism and occurs completely naturally in our bodies. 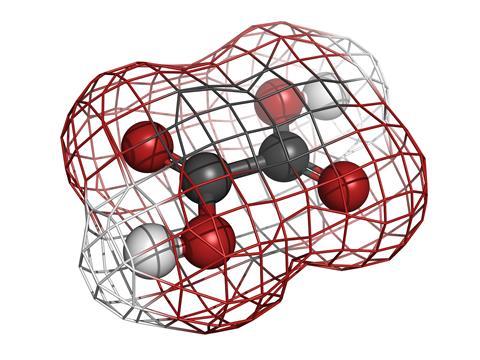 It is named after a plant, the common wood sorrel, a small herb whose leaves have a distinct acidic taste, revitalising if you get lost in the woods, and having the Latin name Oxalis acetosella.

The most distinctive feature of this small molecule is its shape. It looks a bit like two Y’s pieced together by overlapping their bases. Carbon atoms are at the two intersections and oxygen atoms at the four ends with the protons (or H+ ions) hanging one-by-one on either of these oxygens. Moreover, it is completely flat and when it has lost its protons to become the oxalate anion it has minus charges located on two of its oxygen atoms.

Most technical applications of oxalic acid hang on its flatness and negative charge, as did Napoléon’s kidney problems. In the run-up to the battle of Sedan, von Moltke had successfully engaged the French army by a classic pincer movement, attacking from two sides rather than in the centre. In the same way, oxalate ions have two electron pairs on each of the negative oxygen atoms that readily attack, from two sides, any metal ion that comes in its way. And just like at Sedan, more oxalate ions will follow, surrounding the metal with two, three or four oxalate ions depending on its size.

This effect can be used to remove unwanted iron compounds, especially rust, from kitchenware and even marble. As scavengers, oxalic acid or oxalates are components in many technical cleaning formulations and these solutions all work on the assumption that the metal-oxalate compounds formed are water-soluble and thus can easily be washed away. 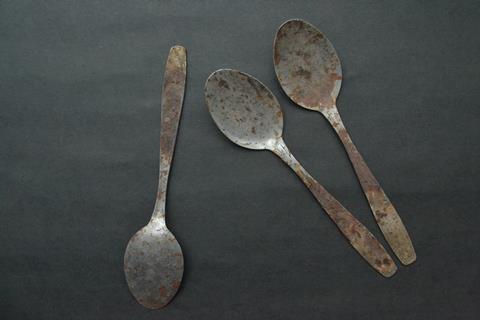 Not so calcium oxalate. The positive calcium ions really love the more negative oxalate oxygen atoms, and to such an extent that they do not care if the oxalate oxygen atoms carry a negative charge or not. So not only will there be a pincer movement forward towards one calcium ion but also backwards, attaching to another one in that direction. As each calcium ion is rather big, four oxalate ions will assemble around each metal ion (compared to three for iron), each attaching to two other calcium ions in the other direction. In this way calcium oxalate will grow into an infinite network that will be completely insoluble in water. As more and more calcium ions and oxalate ions pass through the kidney, the crystals will grow until the condition becomes quite painful.

But do not be alarmed, apart from in some very special medical conditions, a normal, or even high, intake of calcium ions and oxalic acid from natural sources does not seem to increase the risk of kidney stones.

The insolubility of oxalates also finds use in technology. The rare earth elements, or lanthanoids, are becoming increasingly important in many technical applications. Often the first stage in their processing and refining, after an initial leaching from the ores, is to precipitate these elements as their oxalates, because as with calcium oxalate they are very insoluble.

Apart from his unfortunate encounter with calcium oxalate, Napoléon III is known in chemistry history as the instigator of margarine development and for pushing for an inexpensive and practical method to manufacture aluminium on an industrial scale, in his times the most expensive of all metals. He did not see this later goal achieved, but it is notable that the chemical that gave him so much pain, oxalic acid, is also used in making and colouring the hard, abrasion- and corrosion-resistant oxide layer – also known as anodised – coating that is now so important in many of our applications of aluminium.

So health and industry brought together. That was Lars Öhrström from the Chalmers Tekniska Högskola in Sweden bringing you the kidney debilitating chemistry of oxalic acid. Next week, Lars returns with a compound fully capable of protecting itself.

It is unclear when ferrocene was first made, but it seems to have been recorded as a ‘yellow sludge’ in the late 1940s by process technicians inspecting pipes at a Union Carbide cracker, which was used in the manufacturing of the small hydrocarbon cyclopentadiene from dicyclopentadiene.

It caused quite a stir, since no stable molecule composed of only a hydrocarbon and a transition metal were known before, and this compound could be kept in air at room temperature without spontaneously igniting. It also survived meeting such notorious killers of organometallic molecules as water, acids or bases.

And discover the chemistry enabling this in next week’s Chemistry in its Element. Until then, thank you for listening, I’m Meera Senthilingam