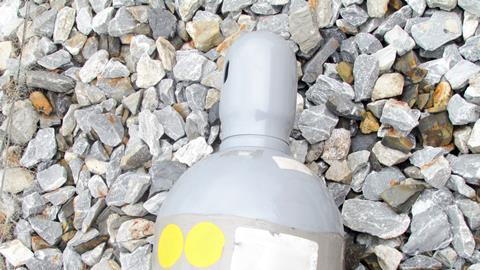 Andrea Sella explains the history of this potent greenhouse gas

This week, Andrea Sella lets out his true feelings, and reveals the darker side of a seemingly innocent compound:

But what about hatred? Is there a molecule you really hate? One you'd want to see exterminated?

For me there is one molecule, one amazing molecule, that stands out from the crowd. That molecule is sulfur hexafluoride, SF6. And I hate it.

OK, you'll ask. Why are you so excited about SF6?

At first sight, SF6 seems a rather innocuous beast. A sulfur surrounded by six fluorine atoms in a nice, regular octahedral array - one on top, one on the bottom, left, right, front and back - each fluorine sitting at 90 degrees to the next. Secondary school students who hear about it are always a bit puzzled or even horrified. According to the simplest rule of bonding, the one we learn in school, when molecules form, the aim for each atom is to achieve a complete octet - to end up with a total of eight electrons in what people call 'the outer shell'. When this happens everything looks like one of the noble gases, which everyone thinks are aloof and untouchable. 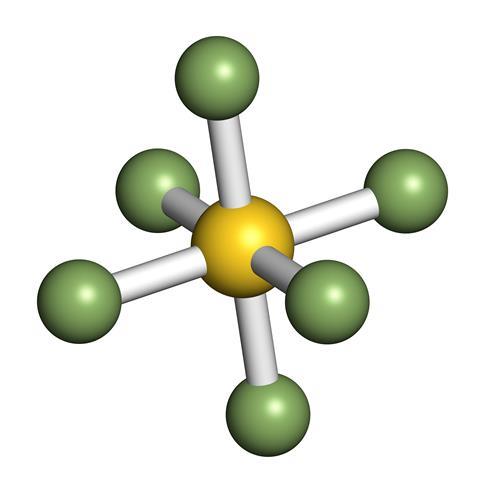 So what about SF6? Well, SF6 violates this rule in spades: by forming bonds with six fluorines the central sulfur atoms ends up with twelve electrons, a situation that doesn't fit with that old octet rule. To get around this, students are told that 'octet expansion' occurs and teachers mutter that it has something to do with d-orbitals. And then the explanation trails away.

Of course there's nothing wrong with the molecule. It's just the theory is so primitive that, not surprisingly, there are hundreds of molecules out there that do their own thing.

In the first year of university, students start to learn about molecular orbital theory, and the idea that it is overlap of orbitals that gives rise to bonding. Provided the orbitals have the right symmetry they can overlap, which leads to bonding. Because of this they can accommodate lots of electrons. And SF6 is the textbook example used to illustrate this concept. The result is a diagram that is (or should be) etched on the mind of every chemist. So SF6 is actually a molecule that should garner respect, rather than opprobrium.

But I hate it.

One of the most intriguing features of SF6 is the fact that it is inert. Terribly inert. It is one of the least reactive molecules we know, resisting attack by water, oxygen, acids, bases, oxidising and reducing agents. Everything. SF6 just sits there.

Over the years, this inertness has led to it being used in places where rock-like stability is crucial. When magnesium is smelted - by electrolysis at temperatures above 1000 degrees - it is crucial to keep air away. SF6 is chosen as the blanketing gas for this process. Even at these extremes of temperature, with one of the most reactive metals in the periodic table, SF6 remains unperturbable.

In essence you can think of it as a kind of molecular armadillo, curled up in a ball, showing the outside world a robust carapace of fluorine that protects its soft underbelly, the delicate bonds inside, from outside influence. Being so symmetrical, there is nothing for another molecule to grip onto as it comes in to attack.

This behaviour is in stark contrast to its near relation SF4 which, with two fewer fluorines is open on one side; a chink in the armour if you will, a fatal flaw that makes it vulnerable to instant destruction. The bonds between fluorine and sulfur are strongly polarised - the fluorine is quite negative while the sulfur is positive, so any molecule with a similar charge asymmetry - like water, for example - will plough into SF4 and rip it apart.

But SF6 is different. Its high symmetry means the charges are very evenly distributed making its surface smooth and impenetrable. For its molecular weight - 146 - SF6 is surprisingly volatile. At room temperature it is a gas. A very dense gas. So dense, in fact, that you can quite literally pour it from one container into another invisibly. 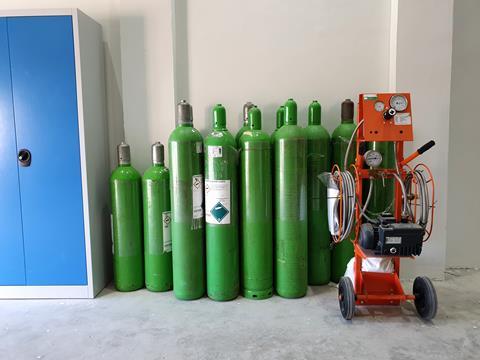 And this is why I hate this molecule. There is a famous demonstration - you can look it up on any internet video channel you want - where SF6 is poured into a clear tank and then a boat made from aluminium foil is laid carefully on top. The boat floats, as if on an invisible magic carpet. Audiences shout, scream, applaud. They are hooked by the bizarreness of it.

And yet this is a demonstration I want to see banned. In fact, I want the gas banned. Why? Because the charge difference between the sulfur and fluorine means that when it vibrates it absorbs infrared radiation. It does so very strongly indeed, much more than CO2. This is a potent, potent greenhouse gas. And the inertness that makes it so useful also means that once we release it into the atmosphere it will stay there for many thousands of years. The International Panel on Climate Change's best estimate is that SF6 has a global warming potential 32,000 times that of CO2. And this value is calculated over 300 years, far less than the expected lifetime of this amazing molecule. So doing this demonstration is just irresponsible - equivalent to driving several hundred thousand miles in a car. And we do this just to make an audience laugh and cheer?

You can argue that the odd demonstration is insignificant compared to its industrial uses, but as the Chinese saying goes, 'A journey of 1000 miles begins with a single step'. As chemists we need to take responsibility for our actions. Keeping SF6 out of the atmosphere is a major challenge for the magnesium industry and others. Perhaps they should be thinking seriously about not using it at all, and consigning it, like chlorofluorocarbons, to the history books. There are some molecules that everyone should hate.

Admit it, you hate it now too, don't you? That was UCL's Andrea Sella with his case against the compound sulfur hexafluoride. Now, next week, we stick with compounds of sulfur, but this time bring you a more corrosive chemistry,

Sulfuric acid is now made from sulfur dioxide in a catalytic process first devised in the 1830s. But the outcome is the same - a strong acid that is highly corrosive and that produces a considerable amount of heat when mixed with water. This is why acid must always be added to water rather than the other way around, to ensure that you don't get a small amount of water in a large amount of sulfuric acid, resulting in flash boiling and spattering with the corrosive fluid.

And to find out the many uses of sulfuric acid, as well as its production elsewhere in our solar system, join Brian Clegg in next week's Chemistry in its element. Until then, thank you for listening. I'm Meera Senthilingam.