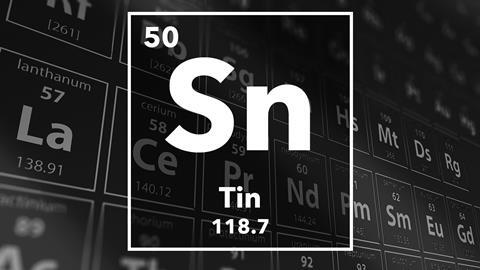 Hello, this week the element that changed the course of industry and also gave birth to the Bronze Age. We find out why the Romans came to Britain and why your organ can go out of tune in winter perhaps irreversibly. But tin fans should watch out because much of what we call tin isn't.

Tin cans, tin foil, tin whistles, tin soldiers, these are that things that come to mind when we think of tin. Which is unfortunate, as tin cans are actually made from steel; tin foil is made from aluminium and tin whistles, well you get the idea. To be associated with a list of obsolete consumable items is especially unfortunate for tin, when we consider that it was responsible for literally changing civilisation! Have you heard of the Bronze Age? Well, some enterprising metal workers at the end of the Stone Age discovered that the addition of a small amount of tin into molten copper resulted in a new alloy. It was harder than copper but also much easier to shape, mould and sharpen. This discovery was so revolutionary that that Bronze Age was born – a name given to any civilisation which made tools and weapons from this alloy of copper and tin. 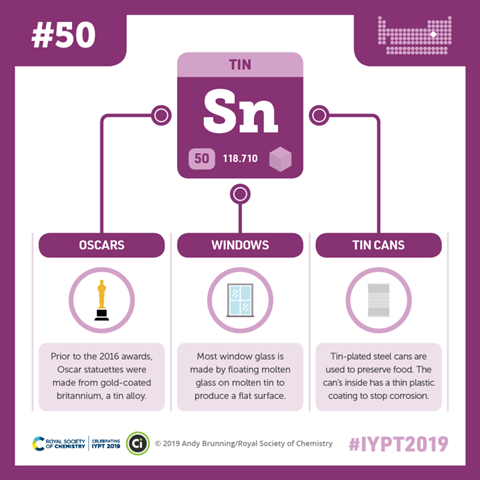 So important was tin that the secrets of its trade were closely guarded. The ancient Greeks spoke of the 'Cassiterides ' or 'Tin Islands' which were believed to lie off the north west coast of Europe. These mysterious islands have never been identified and probably never existed. All the Greeks knew was that tin came to them by sea and from the north-west and so the story arose of the tin islands. It is likely the tin came from northern Spain and from Cornwall. In fact, the strategic importance of the Cornish tin mines is considered one of the reasons why the Roman Empire invaded Britain.

Tin may have played another historical role – this time in the defeat of Napolean's army in the Russian campaign of 1812. It has been claimed that in the severe cold the tin buttons on the soldier's uniforms disintegrated into powder, leading to severe loss of life from hypothermia. The accuracy of this story is debatable, but the transformation of tin from a shiny metal into a grey powder at low temperatures is chemical fact. 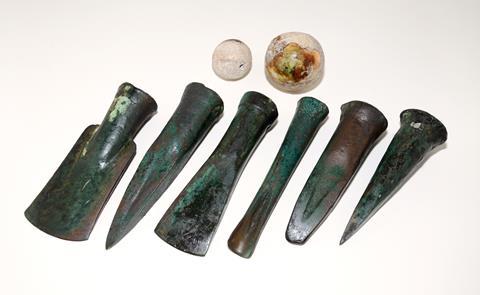 In the cold winters of Northern Europe the loss of tin organ pipes as they began to disintegrate into dust has been known for centuries as 'tin pest', 'tin disease' or 'tin leprosy'. This process is actually a very simple chemical transformation of one structural form of tin – silvery, metallic 'white tin' or 'beta tin' – into another – brittle, non-metallic 'grey tin' or 'alpha tin'. For pure tin the transition occurs at 13.2°C but the transition temperature is lower, or does not occur at all, if there are enough impurities present, for example if tin is alloyed with another metal.

A modern day problem with 'tin pest' has thus arisen, as the tin-lead alloys used to coat leads in electrical equipment have sometimes been replaced with pure tin due to new environmental legislation. In cold temperatures the metallic beta tin coating transforms into non-conducting, brittle alpha tin and falls off the leads. The loose alpha tin powder then moves around inside the equipment, but because it is non-conducting it doesn't cause a problem. However, in warmer temperatures this alpha tin powder transforms back to conducting beta tin, leading to short circuits and all kinds of problems. 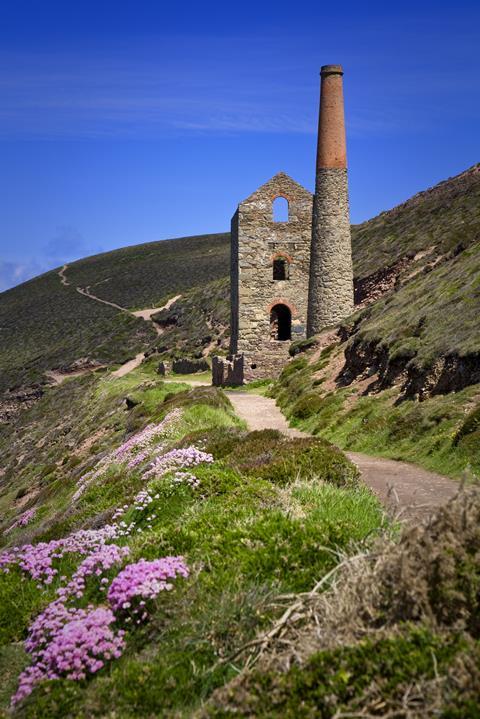 The way to defeat 'tin pest' is to mix tin with other metals, and these days tin is mainly used to form alloys – for example bronze, pewter and solders. Since tin is the most tonally resonant of all metals it is used in bell metals and to make organ pipes, which are generally a mix of 50:50 tin and lead. The proportion of tin generally determines the pipe's tone.

And so we return to the humble tin can. Although not made from tin, cans are often coated with tin on the inside to prevent corrosion. So while it may now seem that tin plays a small role in our everyday lives, remember that once it figured in the rise and fall of civilisations.

So it was the tin that lured the Romans to Britain – funny that, there was me thinking it was the wonderful weather. Telling tin's tale was Katherine Holt from UCL. Next week the substance that makes you see red.

If you are listening to this podcast on a computer with a traditional colour monitor europium will be enhancing your view of the Chemistry World website. When colour TVs were first developed, the red pixels were relatively weak, which meant the whole colour spectrum had to be kept muted. But a phosphor doped with europium proved a much better, brighter source of red and is still present in most surviving monitors and TVs that predate the flat screen revolution.

And you can hear from Brian Clegg how the power of europium was harnessed in the first place and how it was discovered on next week's Chemistry in its element, I hope you can join us. Until then, I'm Chris Smith, thank you for listening and goodbye.