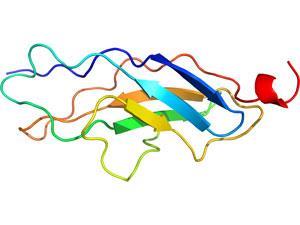 This week, Andrew Holding brings us a rather large protein.

Titin is the largest known protein in the human body.

That is not titin’s only achievement, though - it also holds the record for the largest number of exons found in any single gene. Exons are involved in the splicing of genes. Splicing is important as it means that, when the information in the gene is converted into protein, it can be made with subtle changes depending on its intended role. In the case of titin, these different variants are then used by different types of muscle.

Also, titin’s official chemical name is a contender for the world’s longest word with over 180,000 letters and taking three hours to say (although many linguists disqualify it, saying that chemical names do not count).

But before you get too excited about the record breaking proteins in your muscles, it is worth noting that, while Titin is the biggest protein in your body, the form is even larger in mice, despite their diminutive size.

So what does this supersized protein do and why does it need to be so big? 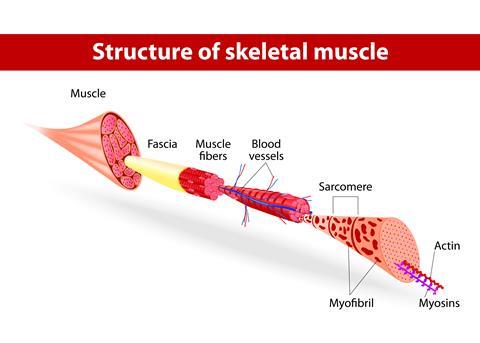 First, we have to understand a little about how muscles work. Inside each muscle cell are two types of long rigid filaments called actin and myosin. If you imagine that these filaments interlock like how you might interlock your fingers (with one hand representing the actin filaments and the other the myosin filaments), you will notice that your fingers can slide past each other freely and your hands get closer together or further apart, even though your fingers do not change length.

This is exactly what happens inside the muscle cell. When you want to contract your muscles, a signal is sent to the cell that causes the myosin to pull themselves along the actin. It does this by having little ‘legs’ on the outsides of the filament, which are able to anchor themselves onto the actin and pull themselves along. They then release, before pulling themselves again in a manner similar to how a rower propels a boat in a series of strokes in water. This increases the overlap between filaments, and it is this which contracts the muscle.

For this to work smoothly, the filaments need a structural component to hold them in place. This is one of the roles of titin. In order to fulfil this role, titin has to be flexible enough to cope with these changes in length, so has a huge spring-like structure within the protein that can stretch or compress as needed when the muscles move. Even more importantly, the spring in titin builds up force as the muscle changes shape, and when the muscles relax it is Titin that allows the muscle to return back to its original size.

Unlike the actin and myosin filaments, which are made up from lots of smaller proteins bundled together (similar to a rope), titin is a single protein and hence why it is so much larger than its counterparts. Using optical tweezers, it is possible to hold onto each end of a single molecule of titin and stretch the protein. But if you pull too hard, the bits of the protein that are not meant to be springy start to unravel.

So it may help provide the strength of the world’s strongest man, but even the largest protein in your body can be stretched too far.

Have you ever seen those spectacles that can be screwed up, but then ‘rebound’ back to their original shape? If so, you’ve probably wondered, like I have, how on earth they work. After all, it seems to go completely against anything you’ve learnt or experienced about how metals behave.

Neil Withers investigates just how this does work in next week’s Chemistry in its Element. Until then, thank you for listening. I’m Meera Senthilingam.