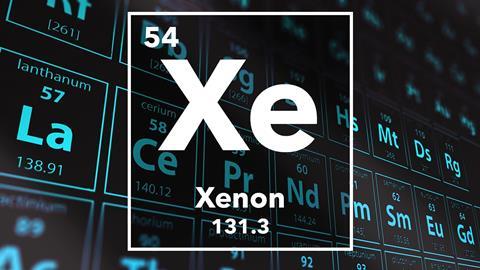 This week we enter the stranger realms of chemistry as we hear the story of xenon. He's Peter Wothers.

When William Ramsay named his newly-discovered element after the Greek Xenon for stranger, I'm sure he had no idea just how strange and important this element would turn out to be. He could never have foreseen that his discovery would one day be used to light our roads at night, image the workings of a living lung, or propel spaceships. 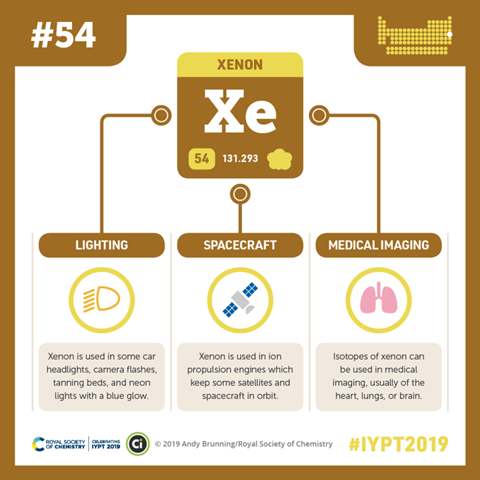 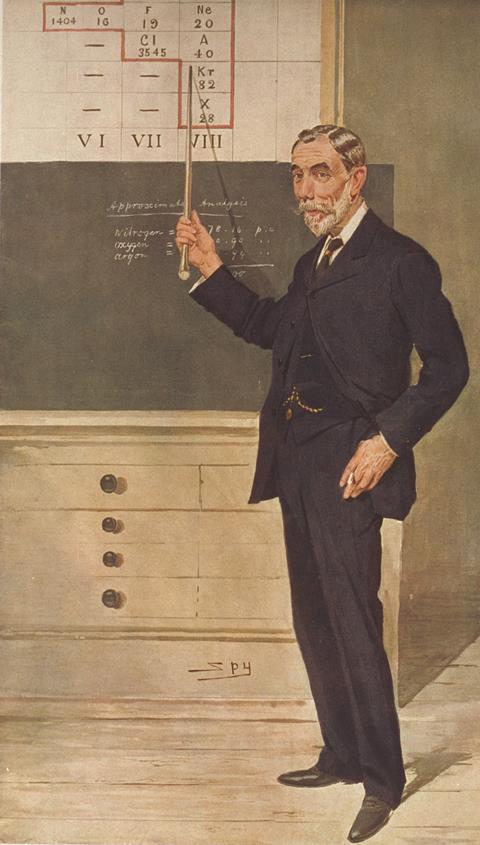 The story of xenon begins in 1894 when Lord Rayleigh and William Ramsay were investigating why nitrogen extracted from chemical compounds is about one-half per cent lighter than nitrogen extracted from the air – an observation first made by Henry Cavendish 100 years earlier. Ramsay found that after atmospheric nitrogen has reacted with hot magnesium metal, a tiny proportion of a heavier and even less reactive gas is left over. They named this gas argon from the Greek for lazy or inactive to reflect its extreme inertness. The problem was, where did this new element fit into Mendeleev's periodic table of the elements? There were no other known elements that it resembled, which led them to suspect that there was a whole family of elements yet to be discovered. Remarkably, this turned out to be the case.

The following year, Ramsay confirmed the presence in certain radioactive rocks of the lightest member of the group, helium, trapped as it was formed during the alpha-particle emission from elements such as uranium. In 1897 Ramsay boldly stated that 'there should be an undiscovered element between helium and argon, with an atomic weight of 20. Pushing this analogy further, it is to be expected that this element should be as indifferent to union with other elements, as the two allied elements.'

Initially, Ramsay looked for the new element in rock samples, but around this time, a new breakthrough in science began to emerge – the production and manipulation of liquid air. In May 1898, Ramsay instructed his student Morris Travers to allow a sample of liquid air to evaporate until just a few millilitres remained. This he did, and upon examining the electrical discharge of the residue with a spectroscope, the appearance of a bright yellow line and a brilliant green line confirmed the presence of a new element. But it wasn't the missing element with mass 20 they had been searching for, it was actually about twice as heavy as argon and is the element beneath argon in the periodic table. They called it krypton, from the Greek for hidden. 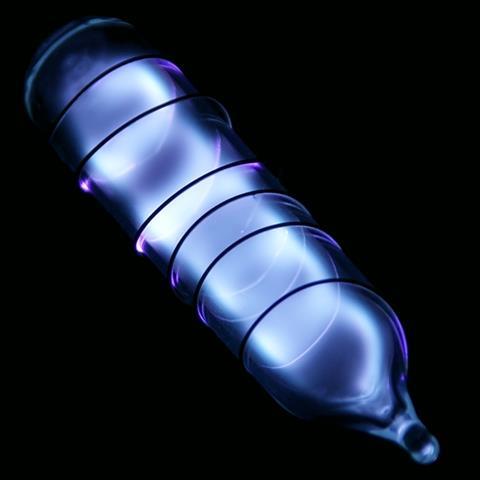 Realising that their missing lighter element should actually have a lower boiling point than argon, they looked again at some of the more volatile fractions of gas from liquefied atmospheric residues.

On Sunday, June 12, 1898 they prepared a sample for examination with the spectroscope, but as they turned on the current through the gas, they had no need for the prism to split the light, for the brilliant red glow of the tube confirmed the presence of the new missing element they named neon.

In an attempt to isolate more of the krypton, Ramsay and Travers repeatedly distilled out the heavier fractions of the liquefied gases. Travers writes: 'one evening late, about July 12th (1898), we had been working at the fractionation of some argon-krypton residues when, after removing the vacuum vessel from the liquefying apparatus, which had been pumped out, it was noticed that a bubble of gas remained in the pump. It seemed likely that this was only CO2, which is quite non-volatile at liquid air temperature. The hour was late enough to have justified neglecting this bubble of gas and going home to bed. However, it was collected as a separate fraction.' 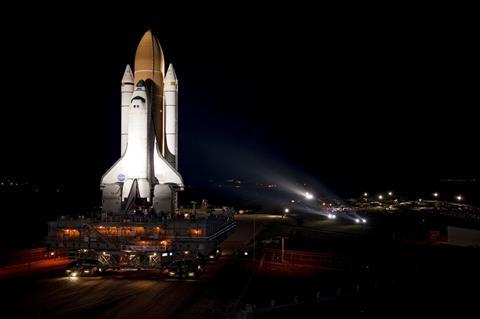 Bathed in xenon lights, space shuttle Atlantis embarks on its final journey from the Vehicle Assembly Building to Launch Pad 39A at NASA's Kennedy Space Center in Florida.

The gas bubble was treated with potassium hydroxide to remove any CO2 and the remaining gas, about three tenths of a millilitre was introduced into a vacuum tube. Ramsay and Travers recorded in the notebook the appearance of the spectrum from this sample: 'krypton yellow appeared very faint, the green almost absent. Several red lines, three brilliant and equidistant, and several blue lines were seen. Is this pure krypton, at a pressure which does not bring out the yellow and green, or a new gas? Probably the latter!' They noted that the most striking feature of this new gas was the beautiful blue glow from the discharge tube.

Ramsay and Travers wanted to name the new gas after its colour, but found that all the Greek and Latin roots indicating blue had long before been appropriated by organic chemists. Instead, they settled on the name xenon, the stranger.

It took Travers and Ramsay many months before they could isolate enough xenon to determine its density. This is not surprising since xenon is by far the least abundant of the noble gases in the atmosphere: by volume, about 1 per cent of the air is argon, 18 parts per million neon, 5 ppm helium, 1 ppm krypton and just 0.09 ppm xenon: just a couple of millilitres in an average room. This means it is pretty expensive - a small balloon full would currently cost around ?100. 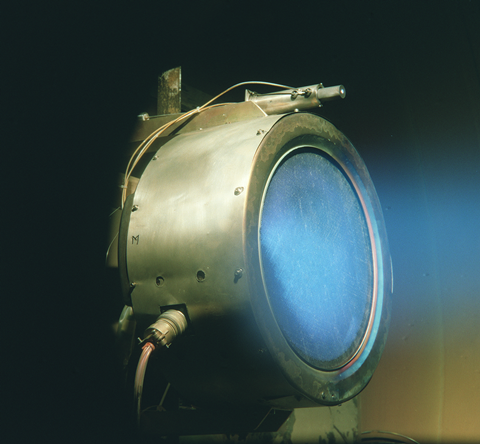 Xenon currently finds its uses as the free element. The most effective car headlamps currently available contain xenon gas at pressures of a couple of atmospheres. Its role is to immediately provide light on switching on before some of the other components are properly vaporised. Being so heavy, and yet chemically inert, it is used in electrostatic ion thrusters to move satellites in space. Atoms of xenon are ionised, then accelerated to speeds of around 30 kilometres per second before being flung out the back of the engine. These ions are forced backwards, propelling the satellite forward in the opposite direction.

Xenon-129, a stable isotope that makes up about a quarter of naturally occurring xenon, turns out to be ideal for use in magnetic resonance imaging. Usually these instruments only detect hydrogen nuclei in water and fats – ideal for most tissue, but are of no use when looking at air spaces such as the lungs. Not only can xenon-129 be detected when breathed into the lungs, it can also be detected dissolved in the blood allowing the functions of a working-living lung to be studied in real time. But perhaps the strangest property of this supposedly inert gas, is that in higher concentrations it is physiologically active in the body and can act as an anaesthetic. It is usually too expensive to use as such, but this could become more common if it can be recycled. In April 2010, xenon made headline news, as it was first used in the treatment of a baby born with no pulse and not breathing. By cooling the baby and treating with xenon gas to reduce the release of neurotransmitters, brain damage to the baby was avoided. Welcome to the strange world of xenon.

So car headlamps, propelling satellites and saving the lives of babies. That was Cambridge University's Pete Wothers with the strange and diverse chemistry of xenon. Now next week, chemistry at the post office.

This led to an amusing situation whereby people could try to send letters or postcards to Seaborg by using nothing but a sequence of symbols of various elements in the following order. First of all one could write Sg for element 106 or Seaborg's name. The second line consisted of Bk for this week's element 97 or the University at which Seaborg worked. The third line was Cf for element 98, californium, or the state in which the university stands. Finally, if writing from abroad, the correspondent could add Am for element 95, or americium, or the country of America to complete the address. To the credit of several postal systems around the world a handful of people did indeed succeed in getting letters and messages of congratulations to Seaborg in this cryptic fashion.

And to find out how Seaborg and his team set about discovering the element in the middle of that chemical address, berkelium, join Eric Scerri in next week's Chemistry in its element. Until then thank you for listening, I'm Meera Senthilingam.