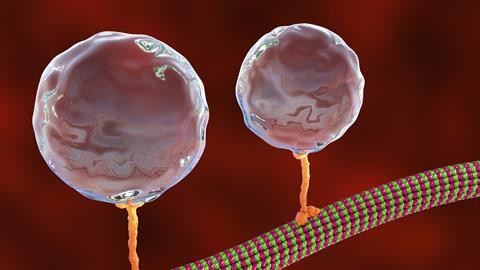 Researchers in Germany have traced the steps that the motor protein kinesin takes in more detail than ever before by getting it to carry a germanium nanosphere.

Kinesins play a vital part in many living cells, including in humans’, dragging cargos like neurotransmitter-filled vesicles along microtubule rails. Kinesins pull with piconewton forces, which Erik Schäffer’s from the University of Tübingen likens to a millionth of a millionth of the gravitational force acting on a chocolate bar.

Scientists first focussed optical tweezers on silica beads attached to kinesin proteins in 1993 to measure the forces they experienced. Breaking down one molecule of the biological fuel adenosine triphosphate (ATP) powers the protein to take an 8nm step forward. Later, researchers claimed to see 4nm substeps, but others disagreed. ‘Our aim was to ask, can we push the limits to actually properly resolve these substeps?’ Schäffer recalls.

Drag forces are strong on large silica beads, ultimately restricting the time and spatial resolution of optical tweezer measurements. But smaller beads scatter less light, and need stronger lasers to generate sufficient optical force to counteract the motor force. ‘However, if you do that, you fry your molecules,’ Schäffer says.

After coating the nanospheres with a lipid bilayer to mimic vesicles, the team bound them to kinesin. Using optical tweezers to detect movement and forces, they found that each ATP hydrolysis does indeed have two 4nm substeps.

The improved measurements also brought a surprising discovery. ‘People thought that motors under too much load would detach from the microtubule, and this is not the case,’ says Schäffer. When hindered, rather than separating from their microtubules, kinesin motors slipped backwards in very fast 8nm steps before starting to move again.

Schäffer thinks that by taking two smaller substeps, rather than one big one, kinesin might maximise the amount of chemical energy from ATP hydrolysis it converts into mechanical work – though it will take further experiments to find out how this works. Chemists developing molecular machines could borrow that trick, he suggests.

The germanium small probes have ‘revealed unprecedented details’ about the operation of kinesin motors, comments Anne-Sophie Duwez who is researching molecules’ mechanical operation at the University of Liege, Belgium. ‘We can expect that this breakthrough will open new possibilities to decipher the operation of other molecular machines and answer to key questions like: How are they regulated? And what limits their speed and efficiency?’ She notes that synthetic molecular machines produce higher forces than biological ones, and is interested whether germanium nanospheres and optical tweezers would work in that context.