6
Sustaining the supply of trustworthy food 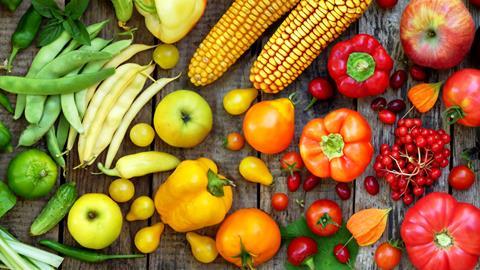 Sustaining the supply of trustworthy food

The world’s population is expected to reach 9.8 billion by 2050. This will have a significant impact on the sustainable access of the Earth’s resources, including the availability of food

One of the challenges of the future is to ensure the continued supply of safe food for a sustainable global population. This is a topic of great importance that must be addressed from multiple angles. In one sense, the volume of food we produce must increase, going hand-in-hand with the increases in our global population. At the same time, two concerning issues associated with our food supply chain must be addressed: wastage and contamination.

Food loss or wastage has recently gained significant interest from both regulators and suppliers. It is prevalent across the entire supply chain, from harvest and transportation to public consumption in both developed and developing countries. Today, a staggering one third of the food produced worldwide is not eaten, resulting in an estimated 1.3 billion tonnes of food waste each year.I

The difficulty in addressing this challenge is changing the mindset of the consumer. Significant progress has been made recently, with many food suppliers taking the mantle in educating to prevent, or simply lower, the volume of food waste. This is an inherently global issue that currently does not have a unified solution in sight.

At the same time, food loss and waste is intrinsically related to concerns over intentional or unintentional contamination and adulteration. Fear over the potential contamination of food has a twofold effect on the delivery of produce. Firstly, if food recalls occur, due to issues such as pesticide or heavy metal contamination, public confidence in this food is undermined. Secondly, if a batch of food is found to have been contaminated, for the reason of public safety, it must be destroyed. Again, this is a waste, especially when detection methods can be integrated into the process to detect any potential contamination issues as they arise.

To add further complexity, the food supply chain is expanding into emerging markets such as China, India and Brazil. With a broader and more complicated food supply chain that involves multiple countries, there is an ever-present risk of food contamination or adulteration. Several high-profile incidents in recent years have demonstrated the damaging effect contamination can have. In 2008, infant milk formula in China was determined to be adulterated with the industrial chemical melamine, resulting in the deaths of six infants and thousands falling ill. Then in 2017, fipronil, a common insecticide, was found to be present in millions of eggs in Europe at levels higher than the safe limit for human consumption. This contamination crisis resulted in the recall of millions of eggs across the world.

Incidents such as the melamine and fipronil scandals emphasise the need for a series of robust and sustainable detection methods that can determine whether the food we eat is fit for consumption. To achieve this goal, various characterisation methods can be adopted. For instance, mass spectrometry can be used to detect residual pesticides, inductively coupled plasma mass spectrometry can monitor the levels of heavy metals and infrared spectroscopy can detect adulterants present in herbs and spices. Here, these three methods are discussed in detail to show how characterisation instruments and methods help ensure that the food available to the public is safe for them to eat.

The combination of liquid chromatography and tandem mass spectrometry (LC-MS/MS) has proven to be a vital method for the routine quantitative analysis of pesticides.

There is a wide range of pesticides that are used across the world that are all subject to their own individual maximum residual limits (MRLs), which dictate the residual levels safe for public consumption. A multi-analyte screening process is fundamental to analysing the diverse range of pesticides, providing the ability to identify multiple potential pesticides within the same chromatographic run, ultimately reducing the number of samples that must be analysed. This means a single sample can be screened against a library of pesticides in order to prevent an unexpected contamination from a known chemical.II

In the case of the fipronil scandal in 2017, LC-MS/MS quickly became established as the go-to detection method, owing to its ability to detect and measure fipronil – and its potentially harmful metabolites – at very low levels. For fipronil, detection methods need to be capable of identifying and distinguishing these metabolites while being sensitive enough to quantify the levels of pesticides at regulatory bodies’ MRLs. LC-MS/MS techniques using new methods and instruments are more than capable of achieving both these goals, making it the characterisation method of choice for pesticide analysis.III

Naturally occurring elements, such as potassium, calcium, sodium, magnesium, iron and selenium, are an integral part of everyone’s diet. However, a number of elements are known to have acutely and chronically toxic effects when their concentrations exceed specific thresholds. The term heavy metals is given to a few elements (arsenic, chromium, cadmium, mercury and lead) that are toxic, even in trace concentrations, and are associated with a multitude of health effects including cancer. Despite this, these heavy metals are still released through a variety of anthropogenic activities thereby affecting populations throughout the globe.IV

It is possible for heavy metals to become introduced into the food chain via a multitude of different mechanisms or sources. One such source is industrial and mining waste, which can contain high levels of toxic elements. These wastes are often stored in slimes dams and reservoirs, and may leach into the surrounding soils, plants and groundwater or disperse over long distances on the wind. Animals may ingest or absorb contaminated vegetation and water, and toxicants can enter the food chain in this way. With heavy metals being essential to our modern industrial world, with electronic technology requiring a vast number of elements across the entire periodic table, this contamination threat is more problematic than ever.

The challenge is to prevent such elements from accumulating to toxic concentrations in our food chain; analysis is therefore essential. By monitoring the levels of metals in certain food and beverages, such as milk, nutritional value can be quantified and it can be declared safe for public consumption at the same time. Certain metals, such as calcium in milk, are essential for healthy growth in infants and toddlers. At this early stage of development, it is important that these essential healthy nutrients are consumed, while the ingestion of dangerous metals is minimised.V

One widely used technique, which allows the detection of elements down to concentrations as low as a single part per trillion in some cases, is inductively coupled plasma mass spectrometry (ICP-MS).VI This technique involves the atomisation and ionisation of a sample into positive ions using an argon-based plasma, before directing these ions to a mass spectrometer for separation and detection. In cases involving food and drinks, such as the milk and farmed fish industries, it is advantageous to be able to detect and quantify trace and major elements together in a single analysis. Modern ICP-MS instruments can quantify the essential nutrients that exist at high levels in the samples, while also detecting trace levels of harmful heavy metals if they are present in the sample. Such analyses are essential in infant milk formula for instance, where nutritional content must be rigorously quantified to ensure consumption of the food groups vital for healthy growth.

The increasing cost of food ingredients is giving rise to a marked increase in purposefully adulterated food. Herbs and spices are among the most commonly adulterated products, owing to their expense and ubiquity within the food supply chain. For example, oregano, commonly associated with Mediterranean dishes, has previously been found to have been adulterated with olive leaves that were readily available locally.VII

To prevent adulteration and provide consumers with information on the potency or origin of certain herbs and spices, various analytical techniques could be employed that can differentiate between chemical compositions. Infrared (IR) spectroscopy is one of these methods.VIII

IR spectroscopy is advantageous in analysing herbs and spices, as it can provide rapid, on-site analysis of samples. It gives a quick and clear indication of whether a sample has or has not been adulterated and it can be performed without the need to prepare samples, making it simple and user-friendly.

Beyond herb and spice analysis, IR spectroscopy is often the method of choice when identifying other potential food adulterants where the adulterants are readily infrared active. For instance, recent studies have indicated the possible contamination of honey with high fructose corn syrup.IX

In order to maintain the integrity of the food supply chain that is essential to feed the world’s growing population, a variety of supply and wastage issues must be addressed and overcome. While the loss and waste of food must be mitigated, the food that is available must be both nutritious and free of any dangerous contaminants and adulterants. To reduce food waste and maintain optimum population health, various characterisation methods need to be employed in the food supply chain to ensure that contaminants and adulterants are detected before they become problematic. 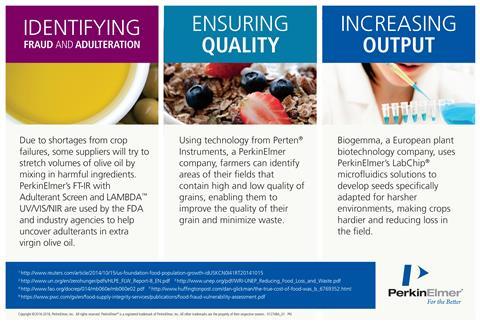 PerkinElmer provides a varied portfolio of analytical instrumentation that is capable of ensuring that the food available to consumers is safe for consumption. ICP-MS technology is considered the best method for detecting and quantifying metals to concentrations of single parts per trillion, while LC-MS/MS is able to identify a wide variety of potential pesticides. With the right analytical solution, global confidence in the safe supply of food can be maintained, and the sustained growth of the world’s population promoted.