Welcome to our innovators collection 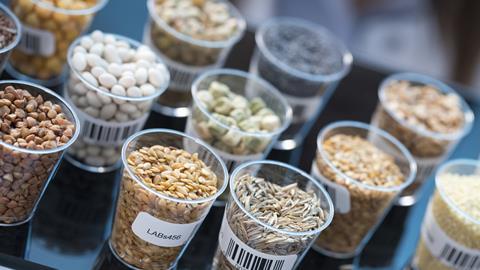 The saying ‘You are what you eat’ is often used in the food industry. But how confident can we be in the contents of our food? Is our lunchtime apple really as nutritious as we hope? Have the pesticides that are essential in ensuring plentiful harvests been fully removed from our meals?

Understanding the components of any sample relies on accurately identifying the key chemicals. For food samples, this could mean quantifying the concentration of major metals in infant formula to ensure the healthy growth of children, ensuring the purity of drinking water or identifying the potential pesticide contaminants that could remain in fresh produce.

The best method to understand the contents of our food originates from characterisation methods similar to those used in any university laboratory. Mass spectrometry is one such method, following its earliest use by Nobel laureates J J Thomson and Francis Aston in the early 20th century. Today innovative technology and research have resulted in mass spectrometry being adopted in many different applications, spanning various fields of analytical research.

PerkinElmer has worked to develop the next generation of innovative technologies to keep the world healthy. Kaveh Kahen, general manager of mass spectrometry, and Fadi Abou Shakra, portfolio director for inductively coupled plasma mass spectrometry (ICP-MS), offer their insights into how innovation has led to mass spectrometry being so widely adopted by the scientific community, especially in the food industry.

An excessive concentration of metals is one of the most destructive types of contamination in food. While some metals – such as sodium, magnesium and calcium – are essential to our well-being and health at the right levels, others are poisonous at even trace concentrations – for example arsenic, lead and mercury. This makes their identification and quantification – even in the lowest of concentrations – all the more important.

ICP-MS is now widely established as the best characterisation tool to identify and quantify metals. This technique involves the atomisation and ionisation of a sample into positive ions using an argon-based plasma, before directing the ions to a mass spectrometer for separation and detection. It is used in the food industry to test samples for their metal content. This could be a result of contamination or to quantify those elements essential to life. But ICP-MS is often deployed in other applications: quantifying the metal content in cells during drug development; testing for toxic trace elements in the atmosphere; or testing for metal impurities in pharmaceuticals.

Instrumentation needs to be robust enough to handle the vast quantities of samples that must be analysed over long periods of time. This places considerable strain on the daily analyst, as any downtime can be costly to the business and potentially disrupt the operation of the lab. ‘Contamination can occur in instruments due to the volume of ions the instrument has to handle,’ Fadi explains. ‘That means that instruments will need downtime to allow for the cleaning of the different components, including the cones and the lenses.’

Maintaining instruments does not need to be a major issue for a laboratory, however. Improvements can be made to laboratory efficiencies that will allow for more samples to be analysed.

At PerkinElmer, enhancing the company’s ICP-MS technology came down to understanding exactly how to remove the unwanted materials before users interacted with the lenses. ‘What we did to overcome maintenance issues was to add a third cone to the NexION instrument,’ Fadi says. ‘Think of the ions going through a mass spectrometer interface as water goes through a garden hose. If we increase the pressure at the tip of the hose, the water would come out at a wider angle. This is because the angle is dependent on the pressure difference across that tip. What we have done is add another cone to gradually reduce the pressure differential while refining the beam of ions to become more focused.’

Focusing the beam generates a controlled stream of ions that are then bent to remove any impurities before hitting the detector. The combination of both the extra cone and the bending of the ion stream prevents deposition onto lenses. ‘It gives you maintenance-free capability,’ Fadi adds.

Many of the different applications that involve ICP-MS need to analyse multiple elements in the same run. One of the challenges associated with this analysis is the different concentrations of the metals present in the sample. For instance, the major metals in milk, such as calcium, sodium and magnesium, will be present at the level of thousands of parts per million in a sample of milk powder. On the other hand, toxic metals – such as mercury, arsenic and lead – could be present in the same sample, but it is entirely possible that their trace presence is on the order of parts per billion.1 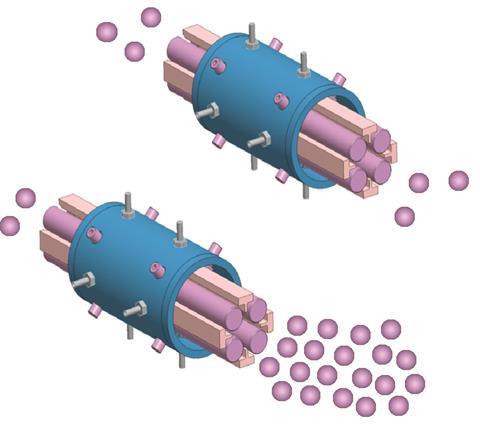 In these situations, ensuring that the correct dynamic range is used for the instrument is essential. ‘Extending the dynamic range of your analysis will allow you to detect all elements at the same time,’ Fadi explains. ‘This range is what typically limits detection and the ability to perform just one analysis.’

The extended dynamic range (EDR) feature of the NexION ICP-MS instrument selectively attenuates the flow of ions through the spectrometer, allowing the controlled measurement of elements with low or high concentrations. It enables the detection of all elements within a single run, be it the smaller, more abundant elements such as sodium or the larger, rarer metals like mercury. ‘This is the beauty of the technique: it is element-specific,’ Fadi adds. ‘If I wanted to analyse two elements with close mass – say sodium and aluminium – but with large difference in concentrations, I can do that in a single run, all by controlling the transmission and beam intensity.’

In addition to the potential contamination of metals in food, the presence of residual pesticides and mycotoxins is another cause for concern. Pesticides themselves are needed to sustain the world’s food supply, but mycotoxins are poisonous compounds produced by fungi associated with mouldy crops. The undetected presence of these residues in food can cause serious illnesses, which adversely affect public confidence in the integrity of their food. As recent consumer trends have indicated, there is a strong desire in the industry for ‘clean food’: produce that is grown free from pesticide exposure and mould.

Understanding what is in our food extends to identifying and quantifying the full spectrum of potential contaminants. This is achieved by characterisation. One of the most widely used methods to detect pesticides and mycotoxins is liquid chromatography coupled with tandem mass spectrometry technology (LC–MS/MS). Here, the LC instrument separates individual chemical analytes, which are then identified and quantified using a triple quadrupole tandem mass spectrometry.

‘High-throughput markets, such as food and environmental analysis, require solutions that offer peak efficiency and lead to increased uptime,’ Kaveh explained to us. ‘To address this need, the QSight Triple Quad LC–MS/MS instrument features the StayClean hot-surface induced desolvation technology to help our customers with the analysis of difficult samples.’

One of the challenges with food samples, though, is the versatile and difficult matrices that need to be prepared and analysed. For example, sample preparations for solid foods will be different from liquid foods. Furthermore, dirty samples can result in instrument contamination which leads to excessive instrument downtime, again causing delays to the identification of pesticides. In these cases, technology that improves the efficiency of the instrument can help scientists to analyse more samples over a longer period of time.

‘Food manufacturers are increasingly resorting to the use of mass spectrometry to analyse the contents of their food,’ Kaveh explains. ‘In this regard, the advantages of using our QSight triple quad instrument have only grown over the years as our technology offerings improve.’

The QSight triple quad mass spectrometer uses the StayClean technology, which is a patented hot-surface induced desolvation interface. This uses the flow of hot gas to transport ions through the physical sections of the mass spectrometer. Hot gas brings a two-fold advantage to ion transport. First, it enables the safe transmission of ions from the different sections preventing them from striking the instrument walls. Second, the hot gas provides solvated species with the necessary energy to become desolvated prior to their analysis by mass spectrometry.

‘Fundamentally, it allows our scientists to analyse complex, dirty samples,’ Kaveh explains. ‘Using this technology increases instrument uptime by as much as 15%, allowing our customers to spend more time analysing samples for potential contaminants.’

Along with fresh food, mass spectrometry is frequently use to analyse cannabis in places where its use has been legalised. It has now been widely adopted in the analysis of pesticides, as well as properties such as potency. ‘As more and more countries begin to legalise the medicinal and recreational use of cannabis, we will see more demand for mass spectrometry,’ Kaveh explains. ‘It offers the ability to test for both residual pesticides and other important components of the cannabis plant.’

PerkinElmer recently began working with a company in the US state of Oregon to identify any of the 59 pesticides mandated by state regulation. Every laboratory testing for pesticides in cannabis produce in the US must be aware of the different legislation and requirements in the different states. Oregon, for instance, only requires the analysis of 59 pesticides,2 whereas in California regulation is stricter, requiring scientists to identify and quantify 66 pesticides.

In both states, use of the appropriate tools enables the identification of the residual pesticides in any given sample. The pesticide list in California is comprehensive and requires the combination of both LC-MS/MS and GC–MS/MS in order to identify each of those on the list. But Kaveh explained that all of these pesticides can be analysed solely using the QSight instrument. ‘Normally a laboratory would need both GC and LC capabilities to test for these pesticides and that means having two instruments, requiring twice the capital investment,’ Kaveh says. ‘But our Dual Source technology can provide one instrument that uses both electrospray ionization and atmospheric pressure chemical ionization in one system for its analysis, effectively eliminating the need for GC–MS/MS. It means that a laboratory can analyse all of the pesticides using just this one instrument and a single method.’

As mass spectrometry is further adopted in emerging and established markets, innovations in instrumentation and methodology will be needed. This could be in response to changing regulations around the safe levels of pesticides or metals permitted in food, as they are continually reviewed and revised as more research is conducted. Detecting metals or residual pesticides often relies on identifying and quantifying a single element or molecule among a thousand, million, or even a billion others. But by identifying the contaminant before it makes it into the hands of the consumer, PerkinElmer helps ensure that trust in food is retained and, more importantly, people are protected against potential contamination threats.

Welcome to our innovators collection