The ever growing family of 2D materials has a new member: gallenene, an atomically thin version of gallium. Gallenene comes in zigzag and hexagonal structures, and has the unusual ability to change the properties of its solid support material, making it promising as a contact material in 2D devices.

Another thing that is unusual about gallium is its melting point – just 30°C. This means gallenene cannot be easily exfoliated from its parent material like graphene. The other option, chemical vapour deposition – used to make germanene, stanene and others – only works with certain support materials. 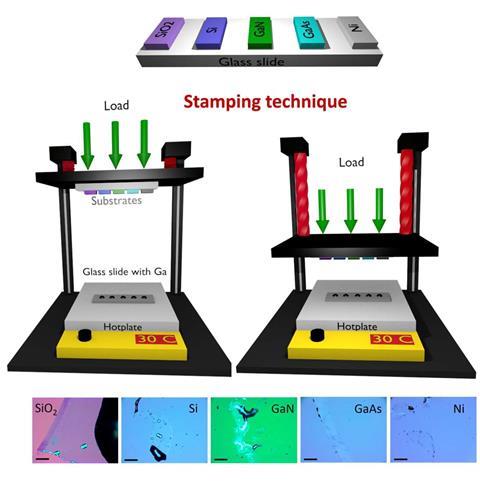 Instead, the researchers who made gallenene came up with a stamping technique. They heated a droplet of gallium to just above its melting point and then brought it into contact with a substrate such as silicon or gallium nitride. The liquid metal freezes instantly upon contact with the colder support, which, when detached from the droplet, retains a gallium layer one to six atoms thick. The scientists think that their solid–melt exfoliation trick could also work for other low-melting metals like tin.

Gallenene strongly interacts with its solid support and even converts semiconducting molybdenum disulfide into a fully conducting metal. This could make it useful as electrical connector in ultra-flat electronics.