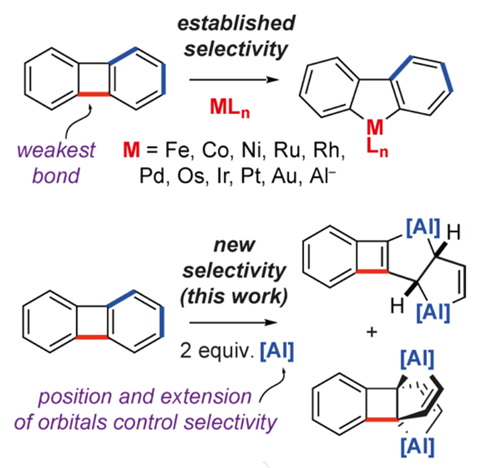 In a first for organometallic reactivity, aluminium has been found to selectively break biphenylene’s toughest carbon–carbon while leaving several weaker bonds intact.

Biphenylene consists of two benzene rings joined together by a pair of bonds, which creates a four-membered ring between them. This central ring is antiaromatic and, because it is so small, under a lot of geometric strain, making its bonds doubly weak and very reactive. In every bond-breaking reaction described so far, an organometallic reagent attacks the central ring and leaves the adjacent benzene rings intact.

But now, researchers in the UK have found that an aluminium(I) complex only attacks biphenylene’s benzene rings while ignoring the antiaromatic centre. This type of selectivity – reacting with stable aromatic units in the presence of more strained ring systems with weaker bonds – has never been observed before. Even a related compound, an anionic aluminium(I) nucleophile, shows the traditional selectivity of breaking the central bonds.

After a few hours at 100°C, two molecules of the monovalent aluminium compound – essentially an aluminium analogue of a carbene – insert themselves into one of the benzene ring by breaking one of two bonds. Both of the resulting compounds contain two five-membered aluminium(III) metallocycles.

For an effective orbital overlap with the central carbon–carbon bond, the biphenylene would need to distort, creating a lot of additional strain. This makes it energetically more favourable for the aluminium complex to react with the flat and accessible aromatic system. Such an example of reagent control overriding substrate bias is virtually unknown.