Scientists in Germany have demonstrated the large scale and inexpensive production of a range of antimalarial drugs, using a continuous flow system.

An important starting material for various anti-malarial drugs is artemisinin, which until recently could only be obtained by extraction from the plant Artemisia annua. As Peter Seeberger, from the Max Planck Institute for Colloids and Interfaces in Potsdam, explains, ‘the problem is that the drug is too expensive, such that in Africa and south east Asia between 40 and 50% of the artemisinin combination therapies are fake.’

In 2012, Seeberger and co-workers developed a means of synthesising artemisinin from artemisinic acid, a byproduct generated from artemisinin production in quantities up to 10 times greater than the drug itself. The reaction is light-activated, so they used a continuous flow reactor, wherein the reagents were pumped continuously through tubes wrapped around a lamp.

Seeberger and his fellow researchers have now taken the process several steps further, by converting artemisinin to several medically useful drugs. The reagents are pumped through a series of modules, meaning the process is fully contained, and can take place continuously.

Module 1 is the light reactor, where dihydroartemisinic acid is converted to artemisinin by photo-oxidation. In module 2, artemisinin is reduced by passing it through a column packed with sodium borohydride, Celite and lithium chloride. The set-up allows the potentially explosive sodium borohydride to be used safely in large quantities. Once the sodium borohydride has been used up, a fresh column is rotated into place. In module 3, different substrates can be fed in, depending on the desired product. And module 4 is a series of purification steps, leading to a product pure enough to meet World Health Organization guidelines. 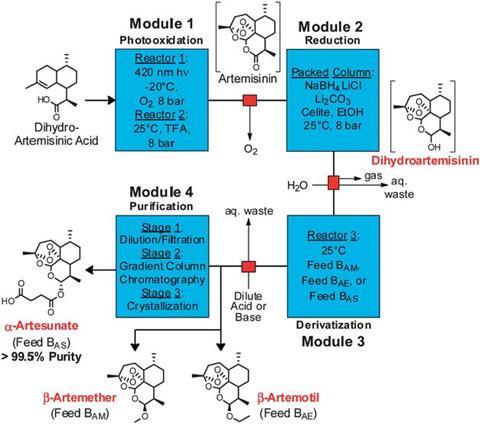 The reaction is monitored by a probe that feeds back constant infrared spectrometry data, so the quality of the products can be controlled at every stage.

Although flow techniques are often used to craft commodity chemicals, the majority of active pharmaceutical ingredients are generated through batch procedures. Andreas Kirschning, an expert in organic synthesis technologies at Leibniz University of Hannover, Germany, says, ‘Seeberger and his group provide one of the most highly important and practical examples of the flow chemistry technique, demonstrating that such technology driven research can revitalise established synthetic methods.’ Fellow synthetic expert, Silas Cook, of Indiana University, US, is also impressed by the practicality of the approach, and adds ‘it will be interesting to learn how the modules perform on scale for the robust delivery of these critical APIs (active pharmaceutical ingredients).’

The process is close to commercialisation, and Seeberger is excited about the prospect of getting the drugs to those who need them most. ‘The goal is to produce as much as possible, at the lowest price, to make it accessible to most people,’ he says.