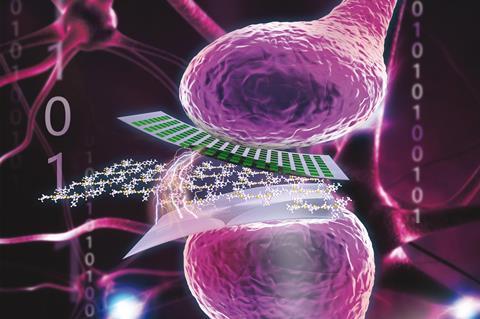 The first waterproof artificial synapse has been made by researchers in China, bringing us closer to cyborg-like implantable devices that mimic the human brain.1

Synapses transmit signals in the nervous system, either between neighbouring neurons or from neurons to other cells. Researchers have been trying to mimic this signalling behaviour with artificial electronic synapse (e-synapse) that are able to recognise patterns and learn specific responses. So-called neuromorphic computing makes use of these brain-mimicking e-synapses in applications ranging from artificial intelligence to edge computing. For all of these, the electronics need to be flexible, durable and transparent. Since humans are up to 60% water, implantable electronics also need to be waterproof.

The problem is that most electronic materials, namely transition metals or functional metal oxides, are inherently not waterproof. ‘Recent advances in the field of memory and synaptic devices are amazing, but we are still looking for better and more reliable devices,’ says Jang-Sik Lee from Pohang University of Science and Technology, South Korea, who was not involved in this study. Lee and his colleagues have combined indium tin oxide (ITO) electrodes with biocompatible polymers, like collagen extracted from fish skin,2 to make flexible – but not waterproof – e-synapses.

A promising new material is poly(3,4-ethylenedioxythiophene)/poly-styrene sulfonate (PEDOT/PSS). This biocompatible polymer has already featured in electronics that researchers integrated into a living plant.3 PEDOT is hydrophobic, and PEDOT/PSS films are transparent and resistant to degradation in both water and organic solvents: perfect properties for e-synapses.

Lin Chen and his team from Fudan University built their waterproof e-synapse device by sandwiching a 2nm thick film of PEDOT/PSS between two ITO electrodes. The device is transparent and does not dissolve in water, acetone, toluene, ethanol, methanol or DMF, even after soaking for over 12 hours.

Like other e-synapses it is a kind of memristor and it works through reversible resistive switching, responding to changes in current by changing its resistance. It is able to respond to over 6000 sequential pulses, both in a flat state and a flexible bent state. But, to demonstrate how the e-synapse can mimic the human brain more closely, the team needed to prove that their device could do more complex tasks like learning and pattern recognition.

The device can learn, forget and relearn

An important characteristic of human synapses is their ability to learn, forget and relearn specific connections. Chen’s e-synapse is able to copy this function in a simplified way, by learning a particular response after a series of 300 electronic pulses. After sitting in an intermediate state for a while, it could then relearn the same response after only 180 pulses. This is characteristic of the human brain as well: it takes less energy to relearn something than to learn it for the first time.

Pattern recognition is a complex task needed for artificial intelligence applications, so Chen’s team created a three layer neural network connected with thousands of their e-synapses. They set it to the task of recognising handwritten digits and trained the network on 10,000 pictures of digits between 0 and 9. In a test with 500 new pictures, the network could recognise the digit 0 with 92% accuracy.

This is a relatively new field and Chen highlights that there are some challenges with the electronic measurements. In particular, he says it was hard to get a suitable contact with the ITO electrodes when the device was in a bent state. Another drawback with this e-synapse is its energy consumption, and Chen’s next step will be to optimise the e-synapse material and structure for more stable performance. ‘Optimisation is needed for practical applications, for example to improve the long-term stability and device-size scaling,’ says Lee. He hopes that researchers will continue to develop ‘new materials and structures as well as novel functions for better artificial synapses in the near future’.