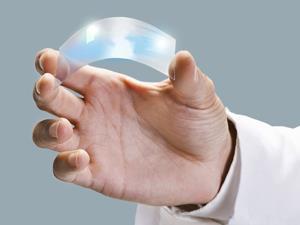 Brian Clegg introduces the ‘ogres’ that make up transparent electronics

This week, Brian Clegg lets the light shine through with this tongue-twisting compound

There are times as a writer of podcasts that there is a certain masochistic attraction to describing chemical compounds that have names that are particularly tricky to say, and there is no doubt that a substance known as poly 3,4-ethylenedioxythiophene provides an appropriate challenge – but its name is not the most interesting aspect of this rather exotic aromatic organic compound. 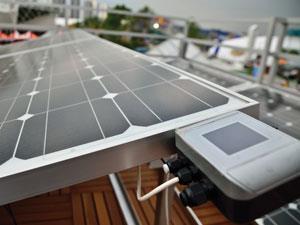 Thankfully for everyone’s sanity, poly 3,4-ethylenedioxythiophene is also known as PEDOT, which I gather means ‘beasts’, ‘brutes’ or ‘ogres’ in Finnish. In reality, the molecule that is repeated to make up this long chain looks rather more like two confused mating beetles, with a linked pair of shapes, each consisting of a benzene ring with two of the carbons replaced by oxygen, and a pentagonal ring featuring a sulfur atom.

What sets PEDOT apart from many other polymers (and for that matter many other substances) is that it is both a conductor and transparent. The free electrons that make, for instance, metals good conductors tend also to make for easy absorption of photons, so by far the majority of conductors are opaque. But PEDOT lets the light through, making it ideal for applications that bring light and electrical circuitry together, notably light emitting diodes, or LEDs, and solar cells.

PEDOT, though, has proved to have properties that take it beyond a mere transparent conductor. In a mechanism known as differential pulse voltammetry, which is used to monitor some electrochemical reactions, PEDOT has been shown to significantly increase the sensitivity of the equipment. By coating the electrodes in PEDOT, the device becomes noticeably more responsive to the presence of ascorbic acid, an important reagent in both pharmaceutical and food applications, due to an electrocatalytic effect.

Another example of electrocatalysis comes into play in experimental use of PEDOT in an attempt to improve the lifespan of fuel cells and the related metal/air batteries. The air electrode in these devices is usually a porous structure of platinum nanoparticles, to maximize the surface area that can interact with oxygen. But this tends to become degraded as the nanoparticles react with carbon monoxide in the air. What’s more, the platinum electrodes are very expensive, contributing the majority of the cost of a fuel cell or metal/air battery. But an electrode coated with PEDOT resists this degradation because the PEDOT acts as a catalyst for oxygen reduction but resists attack. The result is a device that is far cheaper than one with a platinum electrode, and has a much longer lifespan, despite suffering no reduction in performance.

Perhaps the most common use of PEDOT to date, though, is in a mix with sodium polystyrene sulfonate known as PEDOT:PSS. The two form a kind of polymer salt that can be used to produce a flexible conductive material. This has some surprising applications, turning up, for instance, on the latest form of the that old stalwart, photographic film, where a very thin layer of the PEDOT:PSS prevents dust-attracting static from building up on the material. 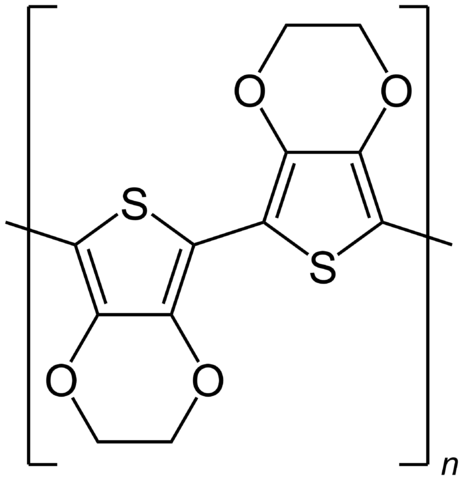 With further treatment, the PEDOT:PSS material becomes a good conductor, making it a suitable competitor to the indium tin oxide that traditionally is used in touchscreens and in organic light emitting diodes, without depending on the relatively rare stock of indium. If treated with water or a simple organic solvent like ethanol, the conductivity of the PEDOT:PSS is not much changed, but when, for instance, a cosolvant of water with a simple organic solvent is used, conductivity shoots up. This is thought to be because the PEDOT is hydrophobic while PSS is hydrophilic, so the water works on the PSS and the organic solvent on the PEDOT, changing the conformation of the respective structures and making the whole more conductive.

One of the advantages of using a material like PEDOT:PSS is that it can be applied as an ink via variants on low cost inkjet printers and in screen printing technology. The result is the ability to produce complex transparent conducting structures down to around 100 microns in scale, which can be applied to both flexible and rigid bases to produce touch sensors, membrane switches and specialist lighting.

Pedot may be a name for beasts are far as the Finns are concerned, but for material scientists, this unusual polymer is proving ideal to domesticate some wild technical applications.

Science writer Brian Clegg there, domesticating compounds with the chemistry of PEDOT. Next week, the true meaning of versatility.

And Jenna Bilbrey reveals the chemistry enabling this multitude of applications in next week’s Chemistry in its Element. Until then, I’m Meera Senthilingam, thank you for listening.