A new Fischer–Tropsch catalyst could enable fuel manufacturers to selectively produce different types of liquid fuel directly from syngas. The technology, which makes fuel from non-petroleum carbon resources, could eliminate some cost and energy-intensive refinement steps that are currently required.

Developed almost 100 years ago, the Fischer–Tropsch synthesis is one of the most famous catalytic processes and is used to make liquid hydrocarbons from carbon monoxide and hydrogen. But the reaction generally produces a mixture of different products – including gases, liquid fuels, and waxes – meaning that further downstream operations are required to separate different fuel types, and to further break down the heavier materials into more useful compounds. ‘Subsequent steps of hydrocracking or hydrorefining are further required to enhance the liquid fuel selectivity. However, such processes require an additional dedicated plant, increasing production costs,’ explains Xiaobo Peng from the National Institute for Materials Science in Tsukuba, Japan. 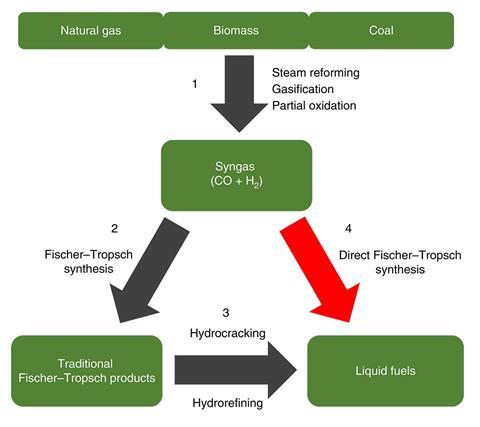 Peng is part of a research team that developed the zeolite-supported cobalt catalyst for selective the selective manufacture of liquid fuels from syngas. As well as facilitating the growth of carbon chains, the system catalyses carbon–carbon bond cleavage in heavier hydrocarbons, maximising the proportion of liquid products created. ‘Our work offers a direct synthesis technology without the subsequent treatments to produce liquid fuels,’ says Peng.

By tuning the pore size and acidity of the zeolite, the team were able to tune the system to make gasoline in up to 74% selectivity. The catalyst can be adjusted to make jet fuel or diesel as the major products. For all three fuel types, the selectivities achieved exceeded previous theoretical limits.

‘Selective conversion of syngas to liquid fuels has been a long-term goal of the Fischer–Tropsch community,’ says Robert Tooze, managing director of Drochaid Research Services, a Scottish company that specialises in catalyst research and has extensive experience in syngas conversion chemistry. ‘The high jet fuel selectivity offers promise for decarbonising aviation fuel, when linked to renewable resources.’

George Bollas, whose research at the University of Connecticut, US, involves Fischer–Tropsch synthesis, echoes these thoughts. He says that the experiments ‘enable us to envision a flexible fuel market where abundant sources of carbon and hydrogen can be transformed to targeted fuels and chemicals of need.’

However, that may still be some way off, with further development required before the system could work in a commercial setting. ‘Clearly catalyst activity and stability under industrially relevant conditions need to be further demonstrated before this and other tailored Fischer–Tropsch systems can realise their potential environmental and economic impact,’ notes Tooze. He points out that it is also important to consider all stages of the fuel-production process – from syngas generation through to the final product work-up. ‘The syngas generation and product refining to specific liquid fuels are often the most capital and energy intensive parts of the overall process,’ says Tooze. ‘Complete elimination of the work-up section through tailoring the product slate remains highly challenging.’