Bombarding zeolites with gamma rays during their synthesis can dramatically increases the rate at which crystals form, researchers in China have found. The resulting zeolites also possess wider pores, leading to a six-fold increase in carbon dioxide adsorption capacity.1

Zeolites are a family of porous aluminosilicates well-known for their ability to act as molecular sieves, separating molecules based on shape and size. This property has been exploited by the petrochemical industry, where zeolites are used as catalysts. But because natural zeolites generally have narrow pores 2nm or smaller in diameter, they are limited in their ability to catalyse reactions which involve bulkier molecules. That means that synthetic zeolites that also contain mesopores, which have diameters of up to 10nm, are in high demand.

The problem is that creating synthetic zeolites takes a relatively long time using conventional methods. Previously, researchers had found that speeding up nucleation, the initial stage in crystal formation, was the best way to accelerate the process. Theoretical calculations had also suggested that introducing hydroxyl radicals could lower activation energy of the reactions involved in nucleation.2 That led researchers in China to devise a new strategy – zapping the reaction mixture with gamma rays during synthesis.

‘Gamma rays can produce the hydroxide free radical in the presence of water,’ explains Xinqing Chen, a professor at the Shanghai Advanced Research Institute who co-authored the paper. While preparing a variety of zeolites, Chen and his colleagues irradiated the aluminosilicate gels with gamma rays at different dose rates. They found that the higher the dose rate, the less time it took to obtain crystals, with the most significant effect seen in a kind of zeolite known as NaA. ‘The crystallisation time was significantly decreased to 18 hours under the gamma ray radiation. Using the traditional method, it takes about 100 hours,’ says Chen. 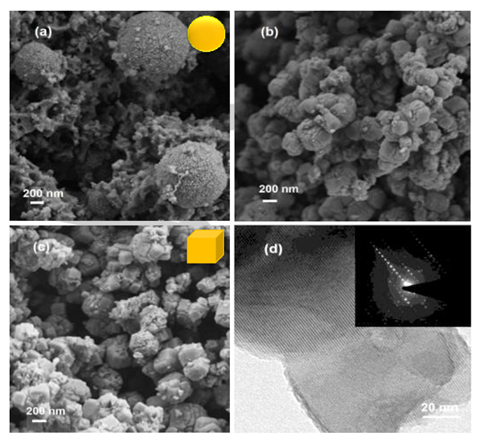 To their surprise, the researchers also found that using gamma rays increased the adsorption capacity of carbon dioxide in the NaA zeolite six-fold. They suggest that this was due to the formation of mesopores which arise from the accelerated crystallisation process.

While Chen believes that the novel method could open up new avenues of research, he explains that the dangers inherent in using gamma rays means the practical applications may be a way off yet. ‘It’s more about fundamental research this was a mechanism in zeolites that was unknown until now,’ he explains.

‘I think the science is good,’ says Russell Taylor, an assistant professor of chemistry at the University of Durham. ‘I think that the main interest is in this mechanism of mesopore formation. It highlights the importance of these accelerated crystallisation pathways by hydroxy radicals, and that these materials do have improved properties.’

Update: An additional reference was added on 23 April 2020.