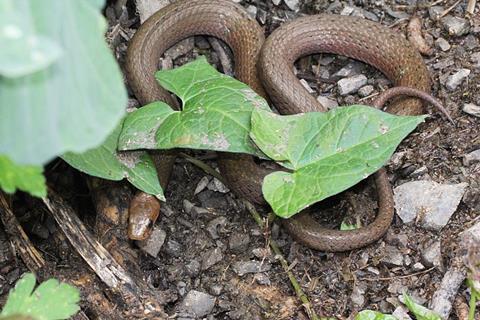 Rhadophis nuchalis, a snake that has found an unusual way to protect itself from predators

Chemical analysis has revealed that an ‘extreme’ dietary shift millions of years ago helped a group of snakes retain its unique chemical defence system.

Rhabdophis snakes, commonly found across eastern Asia, acquire defensive toxins from their prey – rather than making their own – and these make them unpalatable to predators. However, one group of Rhabdophis species native to southern China has shifted its diet away from poisonous toads to harmless earthworms. Despite this, the snakes still seem to have the same class of defensive toxin that their relatives derive from amphibians. Chemical analysis has shown that the snakes now source it from the only other organism known to produce bufadienolide compounds – fireflies.

The discovery was made by an international team of scientists led by Kyoto University’s Akira Mori, who has been studying the snakes for over 20 years. Mori’s research revealed that most Rhabdophis species have structures called nuchal glands in which they store toxins obtained from their prey.

‘It was Akira, who came up with the hypothesis that maybe the snakes are not producing the toxin but are in fact consuming toads and storing or sequestering those toxins,’ says Mori’s long-term collaborator, Al Savitsky.

Savitsky, who is based at Utah State University, US, explains that when the team began exploring the evolutionary relationships between different Rhabdophis species, they came across an unexpected paradox. ‘We determined that there was a group in western China that have shifted their primary food items from [amphibians] to earthworms, and yet they remain toxic with the same general class of toxins – the bufadienolides,’ he says.

This finding sparked a search for the source of the toxins. The team analysed the nuchal gland and stomach contents of wild snakes, as well as the behaviour of captive snakes towards different food types.

The bufadienolide compounds’ stereochemistry provided the crucial clue to the puzzle, says Savitsky. Bufadienolides are a class of steroids that disrupt the function of cardiac muscle cells. While the steroid backbone of bufadienolides produced by toads features only cis-fused A and B rings, firefly compounds also contain trans-fused structures. The position of acetyl groups also confirmed that the toxins stored by the wild Rhabdophis must have come from fireflies. This was supported by the presence of firefly larvae in the snakes’ stomachs.

Snakes are known to use chemosensory cues when selecting prey. Given the dissimilarity between toads and fireflies, the team suggest that worm-eating Rhabdophis must have actively sought a new source of bufadienolides to maintain their defence when the evolutionary split occurred around 13 million years ago. To test this, they carried out chemical preference tests, presenting samples of compounds associated with different prey animals to the snakes, and analysed the snakes’ response using a measurement called a ‘tongue-flick attack score’.

‘When snakes stick their tongue out, they pick up volatile molecules which then are delivered to the vomeronasal organs, and those vomeronasal organs respond preferentially to certain classes of compounds that are associated with prey,’ says Savitsky. By counting the number of times snakes flicked out their tongues, or attacked prey-scented cotton buds, the researchers deduced the dietary preferences of different species of Rhabdophis. This again underlined the worm-eaters’ fondness for firefly larvae.

The results ‘reveal an extraordinary example of convergent chemical defence’, notes Steve Mackessy, an expert in snake venom based at the University of Northern Colorado. ‘What makes this study unique is that in spite of this major dietary shift, the sequestered toxin defence is maintained, but this time via another prey source, lampyrid insects,’ he says. Mackessy adds that the combination of chemical, diet and behavioural analysis provides ‘a well-documented example of extreme dietary shift while retaining an ancestral chemical defence system’.