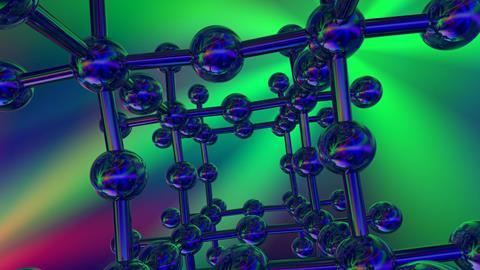 Bizarre new state of matter made: crystal that repeats in time and space

When physics Nobel laureate Frank Wilczek introduced the idea of time crystals in 2012, scientists doubted that they could be made. But now, two independent research groups have created this exotic state of matter for the first time.

Unlike regular crystalline solids that consist of atoms arranged in repeating patterns, time crystals contain patterns that repeat both in space and in time. They are in perpetual motion and, other than regular liquid or solid phases, can never reach equilibrium with their environment.

Christopher Monroe and colleagues at the University of Maryland, US, made their time crystal out of 10 ytterbium ions, which they trapped in an electric field.1 They then excited the system with laser pulses at regular intervals, which should cause the atoms’ spins to flip. However, quantum effects mean that the spin flips occur only half as fast as the laser pulses – the signature behaviour of a time crystal.

Mikhail D Lukin and his Harvard University team created their time crystal inside a diamond,2 in which a lattice crystal defect showed the same oscillation behaviour: spin flips that are twice as slow as the input laser pulses.

These time crystals are the first examples of a broader class of non-equilibrium phases that could one day be used for quantum computing applications.