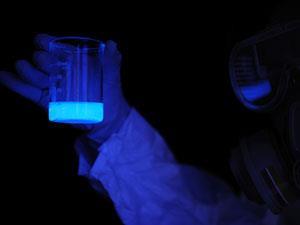 Of all the potential properties of a chemical substance, probably the most exotic is being able to glow in the dark. When radium was first discovered, its glow was a major selling point (until it was discovered to be deadly), and any compound that can produce a ‘cold light’ safely is bound to attract attention. Luminol is one of the best known and most widely used chemiluminescent compounds, which glows with a bright blue light when activated with an oxidizing agent like hydrogen peroxide in an alkaline solution in the presence of a catalyst. 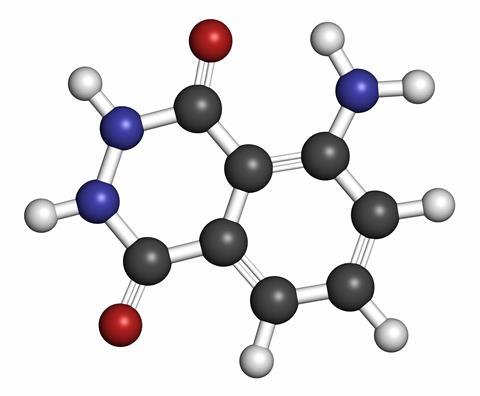 Luminol got its name in the 1930s, but was first discovered at the start of the twentieth century. It’s a heavily modified double benzene ring, with three nitrogen atoms and two oxygens added – technically 5-Amino-2,3-dihydro-1,4-phthalazinedione, but you can understand why it got the shorter name. When the compound reacts with the oxidizing agent, replacing nitrogen and hydrogen with oxygen, the vibrational energy created by the reaction is transferred to an electron which is pushed up to a higher energy level. That energy is then released in the form of a photon of light from each molecule as it drops back to a stable lower energy state.

The need for a catalyst to activate the reaction gives luminol its most famous use – as part of the CSI kit. The faintly yellow crystals of luminol are mixed in solution with hydrogen peroxide and a base to form a spray. The haemoglobin in blood then provides the catalyst to trigger chemiluminescence, so a luminol, base and hydrogen peroxide solution sprayed onto a surface will begin to give off that distinctive blue glow if blood traces are present. Unlike much of the fictional CSI equipment seen on TV, luminol is real and does the job very effectively.

This use of luminol was first devised by the German forensic scientist Walter Specht in 1937, though it had been known that blood would trigger the reaction for about ten years. Specht discovered that the older the stain, the longer and brighter the light-producing reaction. Because the blood is only acting as a catalyst, small traces that are invisible to the eye are sufficient to trigger the reaction, so luminol can be used to detect blood spatter and pools even after cleaning. The reaction lasts a relatively short time, producing a glow for around half a minute, and needs low light conditions to pick it up, but it is strong enough to register photographically with a good camera.

Luminol and blood make for an excellent partnership

A little bit of care has to be taken in certain settings, though, as other iron-based catalysts, such as potassium ferricyanide will also trigger the reaction. What’s more, Luminol will do its trick for some kinds of bleach, some copper compounds, fecal matter and even horseradish. The bleach is often the biggest problem at a crime scene as it may well have been used to clean away the bloodstain, resulting in an even, non-informative patch of glowing material. 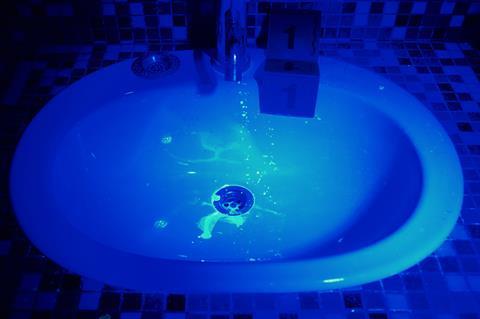 An experienced investigator can tell the difference between blood and bleach because of different speeds of reaction, but it still makes it difficult to discover a bloodstain in some circumstances. And while spraying with luminol leaves the blood intact for further tests, it can remove other evidence, so its use is usually a lot more controlled than the free and easy spraying seen on TV forensic crime shows. Luminol, then, is not a universal solution for the detection of blood traces, but it is often effective. It’s not just a matter of detecting the presence of blood as, for instance, a hidden blood spatter pattern can provide valuable evidence about the direction of an attack or the weapon used.

The CSI team is not the only user of luminol – it has been employed in the laboratory for a range of tests for any combination of the components required in the reaction. So, for instance, the luminol glow can be used to determine hydrogen peroxide concentrations, or to detect the presence of other compounds that could react with the necessary catalyst and prevent it triggering the reaction. But there is no doubt that luminol and blood make for an excellent partnership.

Science writer Brian Clegg there, with the glowing chemistry of luminol. Next week, some good fortune.

Serendipity has played her hand throughout the history of science - the right person in the right place at the right time, the stars align just so, and discoveries and theories emerge that otherwise might have lain buried for years and years. The discovery of prolactin is one such event.

Discover how by joining Anna Nagle in next week’s Chemistry in its Element. Until then, thank you for listening, I’m Meera Senthilingam.