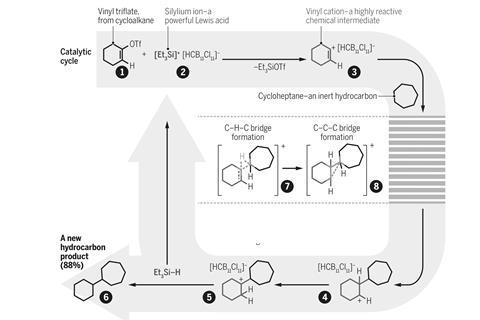 Vinyl cations – highly reactive intermediates long thought to be too uncontrollable for synthesis – have been harnessed in carbon–carbon bond forming reactions. The researchers behind the work think that this strategy could allow them to transform biomass ketones into fuels or construct complex natural products.

Cations bearing a positive charge on an alkene carbon are some of the most reactive carbocations, on par with radicals or carbanions. But unlike the latter two, chemist have been mostly unable to make use of the former. ‘People thought it a hopeless task to try and find methodologies to control [vinyl cations’] reactivity, and find valuable applications,’ says organic chemist Meike Niggemann from RWTH Aachen University in Germany, who wasn’t involved in the study.

Now, a team around Hosea Nelson and Kendall Houk from the University of California, Los Angeles, US, has tamed vinyl cations. They managed to exploit their reactivity for functionalising simple hydrocarbons. ‘We figured out a way to generate [vinyl cations] in hydrocarbon solvents with a non-reactive anion, which allowed us to observe new reactivity,’ explains Nelson.

Starting from cyclic or linear vinyl triflates, the team used monocarba-closo-dodecaborate anions to stabilise the carbocation as they form. The giant CB11 icosahedron is neither basic nor nucleophilic, and creates long-lived vinyl cations that insert into the C–H bond of cyclic alkenes or arenes. After this insertion, triethyl silane rounds off the reaction by adding a hydride to the cation. 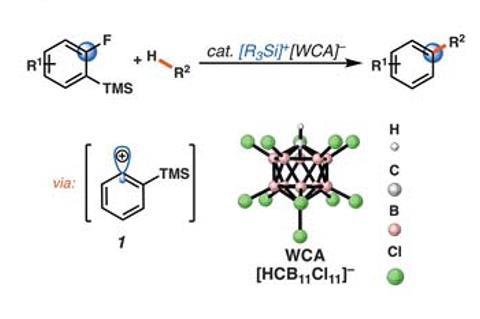 Although Nelson is still not entirely happy with the reaction’s scope – it doesn’t work if the molecule contains heteroatoms – ‘we can make vinyl cations from fairly complex compounds, such as steroids, or do reactions like cyclobutylations’. ‘On the face of it, the products that they can make might not immediately appeal as they are very simple,’ agrees synthesis chemist Santosh Gharpure from the Indian Institute of Technology Bombay. ‘But it’s a first study on something that could not be done before – at least not as easily.’

With certain unsymmetric vinyl triflates, the team discovered something strange: apart from the expected product, the reaction produced small amounts of the ‘wrong’ regioisomer. Here, the alkyl group is attached to the carbon next to the one on which the carbocation forms rather than the same one. Nelson and Houk discovered that the reaction proceeds through multiple non-classical carbocations – strange-looking bridged structures with three-centre two-electron bonding.

Nelson hopes that they might one day be able to leverage this odd mechanism. ‘What this could mean is that we can reverse the natural selectivity of carbocation reactions,’ he explains. ‘Despite the common misbelief that not much more could be learned about carbocations, we are just at the beginning of understanding the intricacies of cation reactivity,’ adds Niggemann.

As vinyl triflates can be made from ketones, Nelson and Houk’s reaction could convert biomass ketones into hydrocarbon fuels, as well as adding another tool to the synthesis toolbox. Gharpure thinks it might even be possible to replace triethylsilane with a carbon nucleophile to create quaternary carbon centres. ‘This also raises the question: can the counter-anion have some chirality associated with it?’ This, he explains, might make the reaction stereoselective. ‘If that can be done, that would be pretty cool.’