When it comes to the future of biological medicines, gene therapy has hogged headlines, with the spotlight often falling on Crispr-based gene editing. But in the background, gene silencing using RNA interference has quietly slipped from an academic curiosity to a marketable treatment, with the first RNAi therapy approved in the US this year.

And this is just the start. A bevy of companies are progressing candidates through clinical trials. ‘The concept of being able to turn off a single gene, in reversible fashion, we think is revolutionary. If feels like we are entering the golden age of RNA interference,’ says Chris Anzalone, chief executive of RNAi specialist Arrowhead Pharmaceuticals, whose tagline is ‘silence the gene, silence the disease.’ 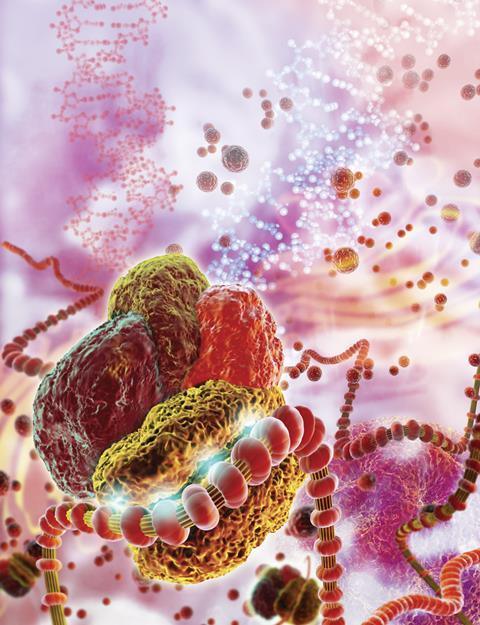 RNA interference can suppress production of all sorts of disease-related proteins, meaning it can target conditions that might be difficult or impossible to treat with other types of drug

RNA interference is a natural phenomenon first reported in 1998, which won its discoverers the Nobel prize for medicine in 2006. It forms part of the body’s machinery for controlling gene expression, as well as a defence mechanism against certain viruses. But it can also be used to silence specific genes that produce harmful or diseased proteins. Using short interfering RNA (siRNA) or microRNA (miRNA), the process can harness cellular machinery to destroy a corresponding sequence of messenger RNA (mRNA) that encodes a disease-causing protein

Big pharma got interested in RNAi from the get-go, but most later backed off. US firm Merck & Co paid over a billion dollars for Sirna Therapeutics in 2006, but sold its assets on to Alnylam eight years later for a fraction of that price. Now, as the technology matures, specialist RNAi companies are making a success of it, and in many cases brokering partnership or licensing deals with large drugmakers.

If you get siRNAs out into the cell, you might only have to dose patients every six months, even nine months in non-dividing cells

The range of conditions in the firing line of RNAi is impressive and diverse, with clinical and preclinical candidates being developed to treat metabolic disorders, infectious diseases, neurodegenerative conditions, cardiovascular disease and even cancer. ‘We can go after diseases and undruggable targets that we never could go after before,’ says Anzalone. ‘There are going to be dozens of new drugs.’

Alnylam is the first to cross the line, with the approval of Onpattro (patisiran). The drug treats a rare and often fatal condition (hereditary transthyretin amyloidosis) that sees harmful proteins deposited around the body. Alnylam decided to target the liver early. ‘In around 2004, we determined that we’d love to deliver to hepatocyte cells in the liver, because there is a rich stream of targets there,’ says Akshay Vaishnaw, head of R&D at Alnylam. ‘The liver is a protein factory of the body. It produces proteins important for the liver, but also for other organs.’

Patisiran is a synthetic siRNA secured in a lipid-based nanoparticle. This is one way around a huge hurdle for RNA-based therapies – delivering them without the body’s nucleases chopping them up or the immune system responding. ‘Naked RNA activates the innate immune system and this has been a huge problem,’ says Steven Dowdy, a molecular biologist at University of California in San Diego, US, who has studied the ongoing barriers for RNA therapeutics. Naked, charged RNAs are also rapidly cleared by the kidneys and liver. ‘You must fight a billion years of cellular defences to deliver RNA across the lipid bilayer [of cells],’ Dowdy explains.

While Patisiran relies on a lipid nanoparticle, almost all the candidates in clinical trials use a different strategy to dodge these defenses, by chemically modifying the RNA. The double-stranded siRNA strands naturally have phosphodiester linkages that are charged, hydrophilic and easily attacked by nucleases. Substituting sulfur for oxygen atoms creates a phosphorothioate linkage on the ends of the RNA strands, which improves stability and potency. Another option is to substitute hydroxyl groups with methyl or fluoro groups.

However, siRNA molecules are about 14 kiloDaltons, which is far too big to simply slip across the cell membrane. The liver offers a way in. Hepatocytes bristle with trimeric asialoglycoprotein receptors (ASGPRS). These receptors bind to glycoproteins that lack the terminal sialic acid part of their sugar decoration, which are usually either degraded human proteins or bacterial proteins, and pull them into the cell to remove them from circulation says Dowdy.

The ideal ligand for these receptors is N-acetylgalactosamine (GalNAc). ‘GalNAc binds to the ASGP receptor, and there are about a million copies per hepatocyte, which turn over every 10 to 15 minutes,’ explains Dowdy. Therefore, attaching GalNAc to an RNAi therapy gives it a free pass into the liver. ‘We’ve developed clever linker technology whereby the GalNAc residues fall off and the siRNA is released into the cytosol of the cell,’ Vaishnaw says. The GalNAc receptor offers such an impressive opening that almost all the liver-targeting candidates in the clinic are using it.

UK-based Silence Therapeutics is also using the GalNAc technology to silence a gene in the liver. ‘This is a negative regulator of hepsidin, which regulates iron in the blood,’ explains chief executive David Solomon. The drug candidate (SLN124) is moving towards an initial clinical trial, aiming to reduce the need for transfusions in patients with haemoglobin dysfunction disorders (beta thalassemia). Solomon emphasises that RNAi offers double precision medicine: ‘It’s specific for the liver and within the liver for one gene.’

Many of the therapies in development are for rare conditions, where there is the potential to recover development costs by charging high prices. Dicerna Pharmaceuticals, based in Cambridge, US, is treating a family of severe, rare liver disorders that are caused by too much oxalate, which would normally be eliminated as waste through the kidneys.

But outside the realm of rare diseases, Arrowhead has a candidate (ARO-HBV) for chronic hepatitis B infection, which infects hundreds of millions of people. ‘This is designed to silence everything that the virus makes, and we are optimistic that if you can do that you can enable a functional cure. The question is how long do you need to provide silencing to enable the immune system to clear the virus fully,’ says Anzalone.

Several companies are also deploying RNAi to treat high cholesterol levels caused by the genetic condition hypercholesterolemia, lowering the risk of heart disease in those patients. Alnylam’s inclisiran, being developed in partnership with The Medicines Company, blocks the liver from making the enzyme PCSK9, which has the effect of lowering low-density lipoprotein (LDL). ‘If you eat a western diet, you are probably going to need an RNA therapy that targets PCSK9 in the liver for hypercholesterolemia,’ says Dowdy.

These therapies can compete with monthly antibody therapies or daily statins to lower cholesterol levels. ‘The Medicines Company is evaluating injections once every six months in their Phase III. So you could have a drug that is given so infrequently that it greatly improves compliance, because this is one of the big challenges with controlling cholesterol. People do not stay on their oral statin therapies,’ says Vaishnaw.

‘For hepatocytes, it feels like we just need to turn the crank. All we need is time and money to push these into the marketplace,’ says Anzalone. Surprisingly durable knockdown of genes is being reported. ‘We thought that our Alpha-1 liver disease treatment could be given once a month, but now it is looking like once a quarter or even less than that,’ says Anzalone. 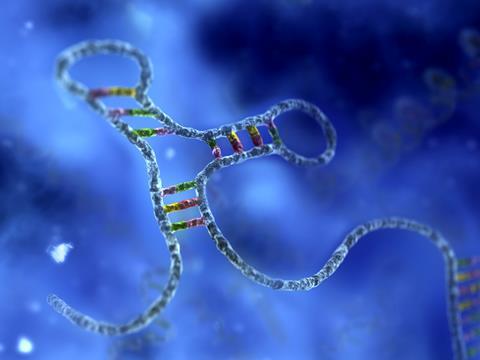 The big challenge is to move beyond the liver. ‘We are starting to see new ligands and new approaches to getting these RNA drugs to tissues outside of the liver,’ says Dowdy. In the lung, Arrowhead’s lead programme targets an epithelial sodium channel to treat cystic fibrosis. Small molecule drugs have silenced sodium channels in lung tissue, but also in kidney cells, which is toxic. ‘We will be the first to knock it down in the lung but spare the kidney,’ says Anzalone. ‘This would also be a great proof of concept in terms of our ability to get into lung epithelial cells via inhalation. It could lead to half a dozen other drugs.’ Conditions like asthma, chronic obstructive pulmonary disorder (COPD) and pulmonary fibrosis could be targeted by RNAi therapies.

One significant hurdle is durability of gene silencing in other tissues. ‘When you are talking about tissues outside the liver, then you are looking at a very small number of molecules getting into those cell types. That is just a fact, so you need to squeeze every bit of potency out of those drugs,’ says Anzalone. It is a challenge for the RNA to escape from the endosome – the lipid bilayer bubble that it is pulled into the cell inside – and get to its target inside the cell. Only a small number need to escape. ‘Once you get escape from the endosome, you can get an incredibly long-lasting effect,’ says Dowdy, since the siRNA can amplify itself within the cell. ‘Even 0.1% escape is good enough. If you get siRNAs out into the cell, you might only have to dose patients every six months, even nine months in non-dividing cells,’ says Dowdy.

Silence’s Soloman compares the initial promise of RNA interference, then the hard twisting road to patients, to the experience with monoclonal antibodies. ‘People no longer talk about antibody companies. They talk about companies that focus on specific diseases,’ he says. ‘This will be the case with RNAi companies. As the field matures, the underlying technology will be used on a whole range of disease, from cancer therapies to immune disorders to haematological disorders to respiratory and even dermatological diseases.’