Buckyballs grow by gobbling up carbon

A quarter of a century on, the discoverer of fullerenes throws new light on their existence 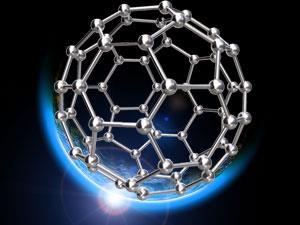 New insights into the formation of some of chemistry's most iconic molecules - the fullerenes - suggest they grow by 'eating' carbon atoms. The study, led by one of the discoverers of buckminsterfullerene (C60), may explain how these football-shaped cage structures form near candle flames and dying stars.

Harry Kroto discovered 'buckyballs' over 25 years ago, while vaporising graphite in helium gas to recreate carbon molecules detected near red giant stars. Since then, chemists have been trying to work out how buckminsterfullerene comes to be. So is the mystery finally solved? Kroto, now at Florida State University in Tallahassee, US, thinks his new study comes pretty close. 'What we have is experimental evidence showing that small cages grow into larger cages,' he says.

The researchers concluded that smaller fullerenes must grow to C60 and larger fullerenes by eating up carbon atoms. A few bonds may be rearranged to incorporate the new atoms, but the cages never compromise their closed structure - the researchers confirmed this by trapping metals inside the cages, which were retained after growth. Although fullerenes can form top-down from graphene sheets, Kroto claims their bottom-up route is the dominant one at work in current fullerene production.

Distributions of fullerenes in the study are strikingly similar to those found in the soot of candle flames, suggesting the same mechanism. And according to Kroto's colleague Paul Dunk, the conditions they used hint at how fullerenes grow in space, where the molecules have turned up in surprising quantities. 'In the outflows of carbon stars and supernovae, it's the same highly energetic conditions with carbon vapour,' he explains. Carbon stars are dying stars, similar to red giants.

The fact that the researchers track the same growth process occurring in the presence of hydrogen is crucial to theories about space fullerenes. 'It's an amazing result,' says Anibal García-Hernández from the Astrophysical Institute of the Canary Islands, Spain. 'Hydrogen-depleted environments were previously considered an essential requirement for the formation of fullerenes. This new study shows an alternative route for efficient fullerene formation in the presence of hydrogen.'

But Olivier Berne at the Research Institute in Astrophysics and Planetology in Toulouse, France, says the findings can't yet answer any big questions for astrochemistry. 'I think what's needed now is an astrochemical model, which puts in all the chemical pathways that are available and tries to evaluate how efficient they are and how you can form fullerenes in space,' he says.

There's also one crucial piece of puzzle still missing. Kroto and Dunk's route accounts for the growth of smaller fullerenes, but doesn't explain how carbon chains and rings coalesce to form cages in the first place. 'We still don't know how to get some evidence with regard to that intermediate step,' Kroto says. 'Nobody has that.'