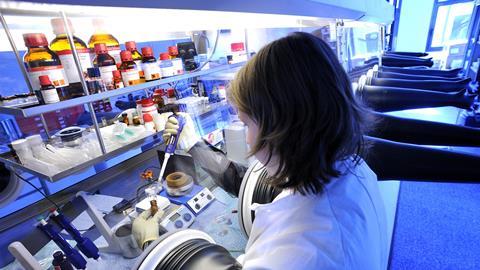 Chemists in the UK and Spain have used organolithium compounds in syntheses in the presence of air, which normally causes such reactions to fail or even catch fire.1 The team, led by Eva Hevia from the University of Strathclyde and Joaquín García Álvarez at the University of Oviedo, do small-scale reactions in a ‘deep eutectic solvent’ (DES). ‘Also, in some cases we get better selectivities than under standard inert atmosphere conditions,’ Hevia tells Chemistry World. ‘It’s a win-win.’ 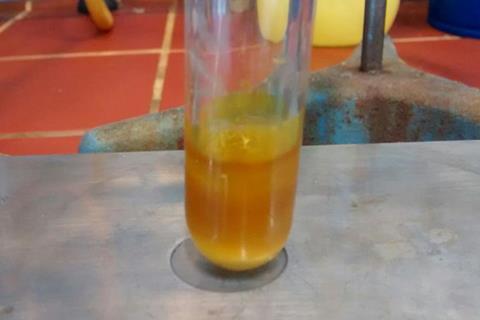 Small scale organolithium alkylations of amines can be done in a far simpler setup in DESs than conventional conditions – a reaction tube in air without stirring, rather than a cooled, inert atmosphere vessel

Essential to synthetic chemistry, organolithium reagents are also sometimes pyrophoric, spontaneously catching fire in air, bringing the risk of injuries like those that killed University of California, Los Angeles student Sheri Sangji. The danger comes because of their powerful reactivity, which also makes them prone to undesirable reactions, like forming useless by-products with traces of water. Chemists are therefore careful in using organolithiums, usually shrouding reactions in blankets of inert gas, and cooling them to -78˚C to prevent unwanted side-reactions.

The approach Hevia, García Álvarez and their colleagues use could scarcely be more different, thanks to their DES, made by mixing choline chloride and glycerol. In the chemists’ latest work, they transfer organolithium reagents under inert conditions to imine or quinoline electrophiles dissolved in uncooled DES in an open tube to produce amines. The reason this is possible, Hevia explains, also means that the reaction takes less than three seconds.

‘These solvents are formed by a complex network of hydrogen bonding interactions,’ Hevia says. She and her colleagues postulate that this activates, and therefore speeds up, the reaction between the organolithium and the electrophiles, although this is yet to be firmly established. The hydrogen bonding also apparently prevents side reactions. ‘We think that all the hydrogens are involved in this bonding and therefore they are not so susceptible to protonating the organometallic reagents,’ Hevia adds. ‘We have seen that even after 100 seconds in that solvent, which in organolithium chemistry is quite a lot, the reagent is still active and you can get almost quantitative conversion to the alkylation product.’

Unlike other solvents used for organolithium alkylations, DES is non-flammable. ‘You don’t have the vapour of an organic solvent, so even if you have a flame it’s less of a problem,’ says García Álvarez. The DES also has a high heat capacity, meaning it can easily withstanding heating from exothermic reactions without a cooling bath. ‘To carry out chemistry that in industry usually requires cooling to -78˚C at room temperature would mean a significant production cost decrease,’ Hevia observes. 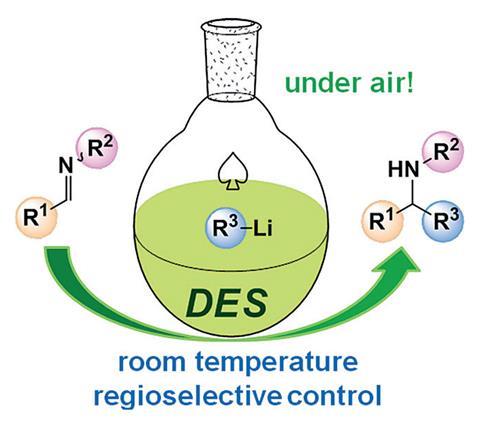 Toxic organic solvents can be replaced by cleaner, greener ones allowing organolithium chemistry to be carried out in air and at room temperature

Purifying the organic product once the reaction has been carried out still requires optimisation. However, this is not a major problem if isolating the desired molecule leads loses the DES, as it’s very cheap. ‘Choline chloride is used as a chicken feed additive,’ Hevia says. ‘It’s produced in tonnes per year.’

The approach ‘opens new doors to greener and safer chemical transformations’, according to Beatriz Macia-Ruiz, who works with organolithium reagents at Manchester Metropolitan University, UK. She adds that the methodology ‘is of high interest in synthetic chemistry’ because it’s fast and simple, and compatible with functional groups that can be displaced later.

‘This work provides an additional valuable example that organic transformations mediated by highly polar organometallic compounds can be safely and conveniently run using DESs,’ say Vito Capriati from the University of Bari, Italy. Previous examples include Hevia and García Álvarez’s team’s initial work adding organolithiums to carbonyl compounds2, and Capriati’s team’s use in heterocycle synthesis3. Further broadening DES use ‘will be the way to bring chemistry back to life’, Capriati says.